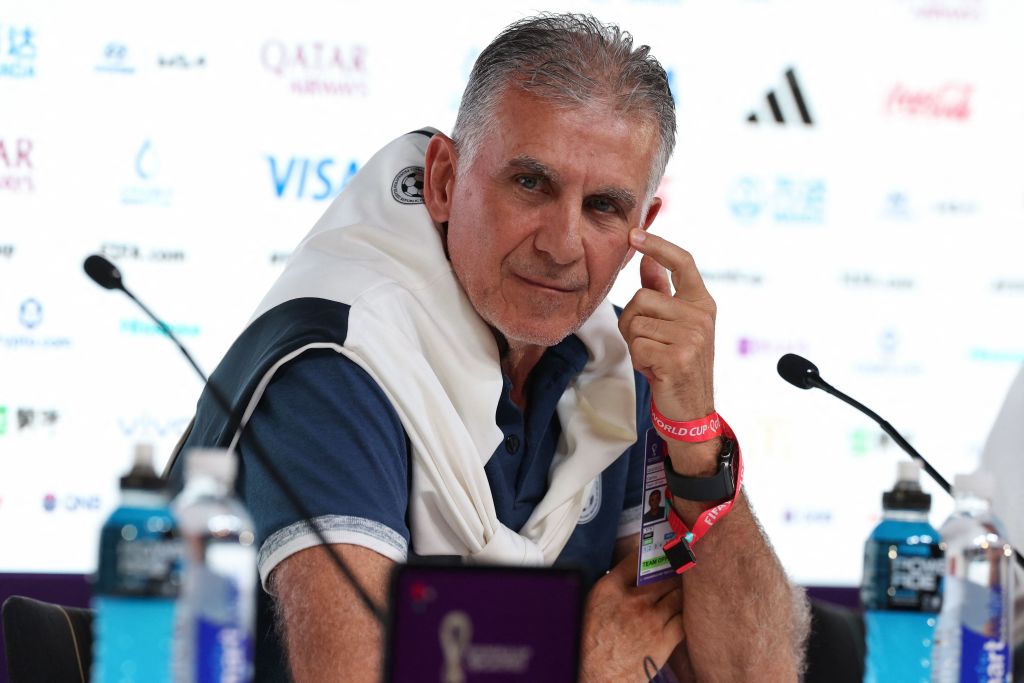 Iran manager Carlos Queiroz has confronted a female BBC journalist regarding a question she asked about ongoing protests in the country.

The protests sparked by Amini’s death have become one of the boldest challenges to the Islamic Republic since its establishment in 1979, with demonstrators calling for regime change.

At least 416 people, including 51 children and 27 women, have been killed by security forces in the protests, Oslo-based rights group Iran Human Rights (IHR) said on Tuesday.

‘Why do you ask these questions? Why? I’m talking with you,’ Iran boss Queiroz said in a viral video on Twitter as he approached the BBC journalist after a press conference, surrounded by people taking videos and security staff.

‘I’m asking one thing to you now. The press conferenced finished. Do you think this is fair?

‘Why don’t you ask other coaches, ask [Gareth] Southgate what they think of England and the United States, how they left Afghanistan?’

Carlos Queiroz confronts a BBC journalist after the Iranian team press conference for asking questions about the protests in Iran @itvnews pic.twitter.com/WtggqjL7xZ

Meanwhile, Iranian international footballer Voria Ghafouri has been arrested over accusations he ‘spread propaganda’ against the Islamic republic.

The right-back was arrested by Iranian security forces after a training session with his club on Thursday, November 24.

He was arrested on charges of having ‘tarnished the reputation of the national team and spread propaganda against the state’, an agency said.

Carlos Quieroz wants the World Cup to be about football. The brutal suppression of dissent in Iran wonât allow it. Confronts BBC reporter in Doha pic.twitter.com/UwQBZL7Zbo

Ghafouri, 35, who plays for Foolad Khuzestan in Iran, has been a vocal critic of the regime and its violent crackdown on protests.

He was listed as a member of Iran’s 2018 World Cup squad but was not named in the final squad at this year’s World Cup in Qatar.

Iranian team refused to sing the official Iranian anthem at #FIFAWorldCup2022 as a sign of support for protesters in their homeland.

Admire everyone who is fighting for freedom and democracy! The price of freedom is so high but it’s the only option. pic.twitter.com/veLe2DPCgr

Many Iranians have turned against their national football team amid the ongoing unrest in the country.

They see the team as representing the regime rather than the people of Iran.

Jude Bellingham is currently with Ben White and other Arsenal stars in Qatar (Picture: Getty) Jude Bellingham will snub Liverpool to join Arsenal in the summer, former Chelsea left-back Scott Minto has predicted. The Borussia Dortmund and England midfielder is already considered one of the best players in the world and has been liked with […]

Joe Lycett addressed David Beckham (Picture:@joelycett/Twitter) Joe Lycett has revealed the LGBT charities he donated £10,000 to amid his controversial money-shredding stunt, which saw him call out David Beckham for his deal with Qatar. If you somehow missed it, Lycett threatened to shred £10,000 unless Beckham ended his relationship with Qatar. Homosexuality is illegal in […]