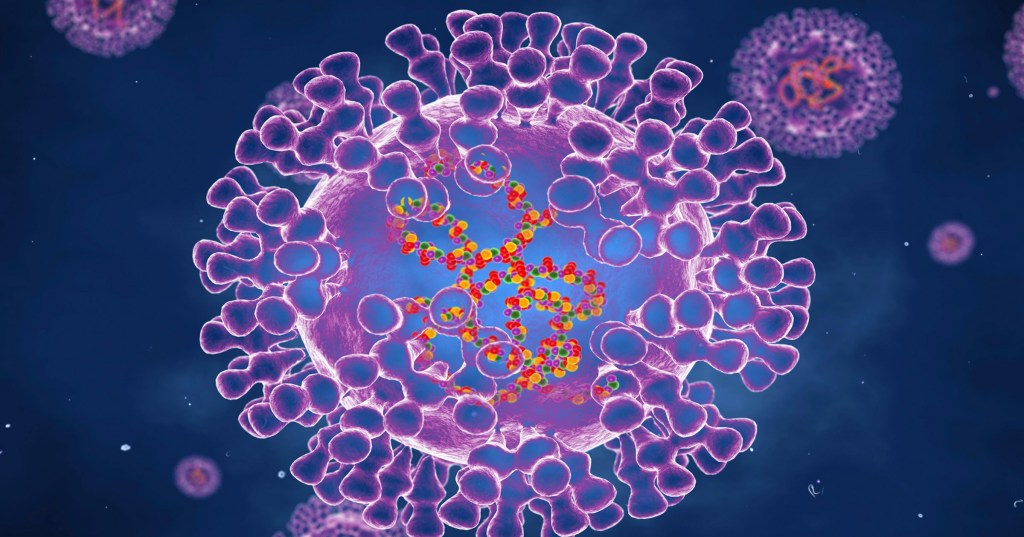 One person is being treated in hospital while the other is isolating at home (Picture: Getty)

Two people have been diagnosed with monkeypox in London, health officials have said.

The pair live in the same household and are not linked to the previous case confirmed in England on May 7, the UK Health Security Agency (UKHSA) said.

One of the pair is being cared for in the infectious disease unit at St Mary’s Hospital, Imperial College Healthcare NHS Trust in London.

While the other does not currently require hospital treatment and is isolating at home, the UKHSA said.

Monkeypox is a rare viral infection that does not spread easily between people and is usually a mild self-limiting illness, however some people can experience severe illness.

Health officials are investigating how and where the pair caught monkeypox.

They are also racing to track down people who might have been in close contact with either of the infected people.

Dr Colin Brown, director of clinical and emerging infections at the UKHSA, said: ‘We have confirmed two new monkeypox cases in England that are not linked to the case announced on May 7.

‘While investigations remain ongoing to determine the source of infection, it is important to emphasise it does not spread easily between people and requires close personal contact with an infected symptomatic person.

‘The overall risk to the general public remains very low.

‘We are contacting any potential friends, family or contacts in the community.

‘We are also working with the NHS to reach any healthcare contacts who have had close contact with the cases prior to confirmation of their infection, to assess them as necessary and provide advice.’

Last week health officials confirmed one person had fallen ill with the virus after visiting Nigeria.

They received care at the infectious disease unit at the Guy’s and St Thomas’ NHS Foundation Trust, London.

Monkeypox was first identified in monkeys in the 1950s and cases in humans were confirmed in the 1970s.

The first case of in the UK was recorded in 2018 and was linked to travel to Nigeria.

A rash can also develop, usually starting on the face before spreading to other parts of the body. It eventually forms a scab which falls off.

Health officials have stressed most people recover from the illness and it does not spread easily.

Eurovision 2022: How do you vote and how much does it cost?

Ready for the final? Here’s how you can vote (Picture: EBU) At this year’s Eurovision Song Contest, there’ll be 25 dazzling acts vying your vote. Well, 24, as unfortunately those in the UK can’t vote for their own entry: TikTok star and Space Man singer Sam Ryder. Still, it’s guaranteed to be an entertaining show, […]

Nine Perfect Strangers viewers baffled after Nicole Kidman series ‘nears season 2 renewal’: ‘This was good for me as a one and done’

‘I can’t fathom what a second season would be about,’ one viewer said (Picture: Hulu/Amazon) Nine Perfect Strangers, the eerie series starring Nicole Kidman as a wellness resort founder, is said to be close to being renewed for season 2… and viewers are mystified. The show, which was based on the novel by the same […]

The government said the decision to cut ties with the NUS ‘had not been taken lightly’ (Picture: REX/EPA) The Government is to suspend all engagement with the National Union of Students amid accusations of antisemitism at the heart of the body. Universities minister Michelle Donelan has ordered the NUS to be removed from all the […]