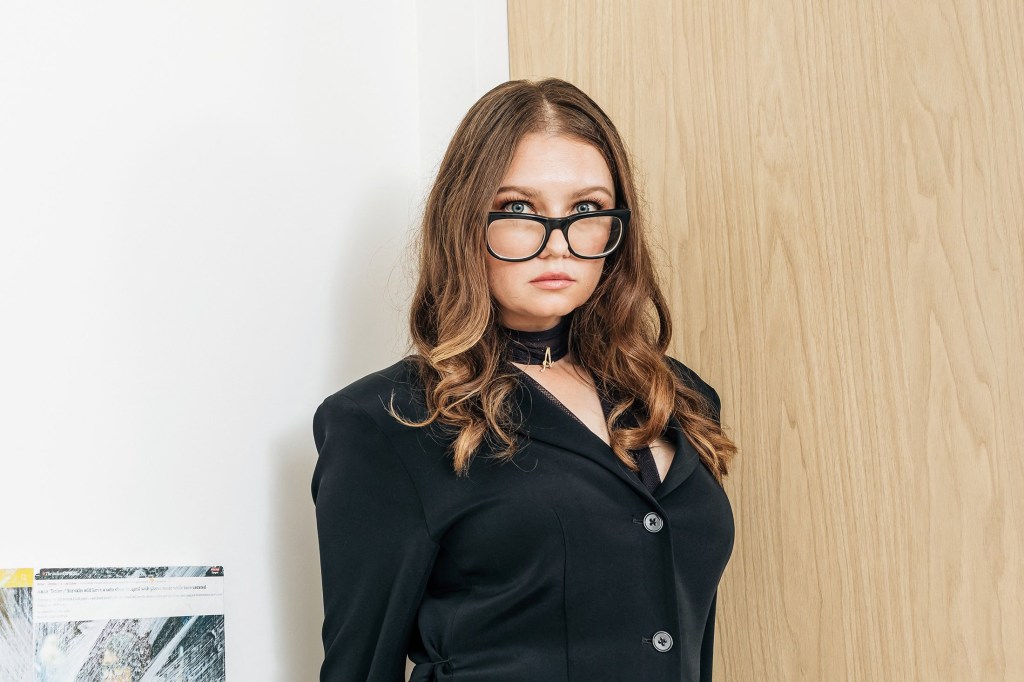 In yet another twist to the wild story of Anna Sorokin, the fraudster will be the star of a new reality series that will be filmed in her home since she legally can’t leave it.

The Russian-born fake heiress, also known as Anna Delvey, was the subject of the Netflix drama Inventing Anna, which starred Julia Garner.

It told the story of how she conned New York City’s elite into believing she was a German heiress with access to a substantial fortune.

Now she will be telling her story on her own terms.

An announcement for the show, called Delvey’s Dinner Club, explained the programme will involve dinner parties at her home.

‘She’ll do it through what’s already become one of the hottest tables in town — invitation-only, intimate dinners at her home,’ a press release, according to Variety read.

‘There, a Delvey-invited group of actors, musicians, founders, socialites, journalists and other esteemed guests will join her each week around a private-chef catered table.

Sorokin being led away after being sentenced in 2019 following her conviction on multiple counts of grand larceny and theft of services (Picture: TIMOTHY A. CLARY / AFP)

‘[The show will be] replete with candid conversations where no topic is off-limits – including Anna’s experience within the criminal justice system, her strategy to rebuild her image and her plans for the future.’

The series will allow audiences to see what her life is now like as she seeks to ‘reinvent herself and her name’.

‘There’s nothing like the experience of bringing together a curated group of friends to share life stories and enjoy a great culinary experience,’ Sorokin said in a statement as reported by Variety.

‘I’m grateful for the opportunity …to bring my vision to a wider audience and share a glimpse of the real Anna Delvey.’

Between 2013 and 2017, Sorokin lived the high life and travelled for free by private jet, and lived on credit in Manhattan hotels, without ever paying her rapidly rising bills.

After serving two years in prison for fraud, she was released in 2021, but soon detained by immigration authorities for overstaying her visa.

When moved to house arrest, Bloomberg reported that Sorokin would also have to wear an electronic tag and should not be allowed access to social media.

After the show inspired by her crimes was released, Sorokin admitted she had watched it, but said she thought she was ‘more self-aware of the way I come across’.

‘Not all of the time, but I just don’t think I’m, like, so brazen and shameless.’

To view this video please enable JavaScript, and consider upgrading to a web browser that supports HTML5 video The Traitors star Kieran Tompsett has addressed claims that he ‘cheated’, as we’re still recovering from the thrilling climax that was the game show’s finale. In the final roundtable, Kieran dropped the biggest clue ever, leading Faithfuls […]

Paramedic speaks out after patient jailed for ‘sickening’ sexual assault

‘It could have been dealt with a year ago’ (Picture: Jam Press) A woman says she was misdiagnosed three times by doctors before they discovered she had a rare bone cancer. Sarah-Jayne Wilson, a project coordinator from Warwickshire, says that she spent almost a year suffering with horrific knee pain, pleading with medical professionals for […]