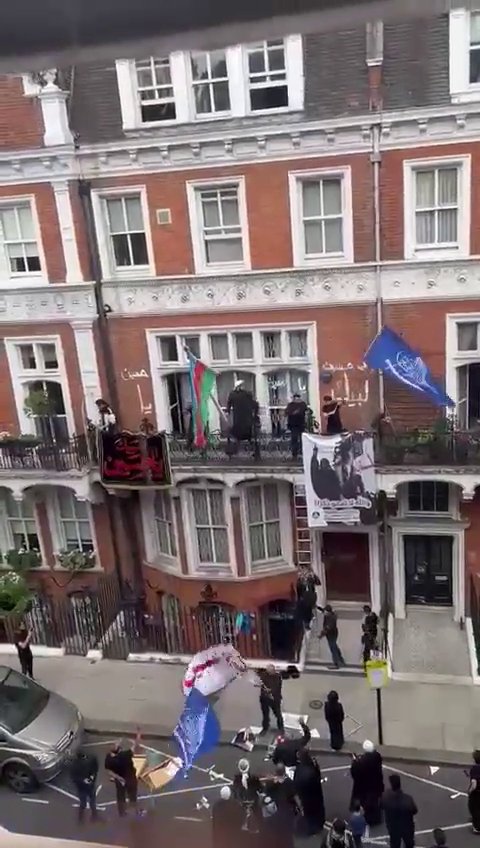 A group of protesters have stormed the Azerbaijani embassy in London.

Footage on social media showed men waving flags from the balcony of the country’s base in Kensington.

Slogans in Arabic have been daubed on the wall and the Azerbaijani flag has been taken down.

It’s unclear what the protest is over but it appears to have been led by a group called The Mahdi Servants Union.

The group is a Shia Muslim organisation based in London which says it wants to establish ‘civilisational dominance’ on its website.

Its leader is a cleric who is a strong critic of Iran.

Members linked to the group have cited ‘persecution’ by the Azerbaijani government.

Iran’s embassy in London previously accused the group of attack on its property in 2018.

Metro has contacted the Metropolitan Police, The Mahdi Servants Union and the Azerbaijani embassy for comment.

Protesters hung flags from the front of the embassy and climbed up to the balcony (Picture: @Gh3ttoAstronaut)

Cal the Dragon feels Aston Villa can shock the bigger sides (Picture: Instagram/Getty) Football influencer Cal the Dragon has backed Aston Villa to challenge for the Premier League top four this season. The TikTok star, who has 1.6m followers and 66.7m likes on his videos, was quizzed about which team could be a surprise package […]

One in ten fork out £1,200 on holiday extras – so experts share how to avoid additional costs

How much are you forking out for holidays? (Picture: Getty Images) From shopping and waxing, to getting your hair and nails done – a holiday is no cheap feat. And, as many of us have been unable to travel in the last few years, it can be tempting to go all out with a trip […]