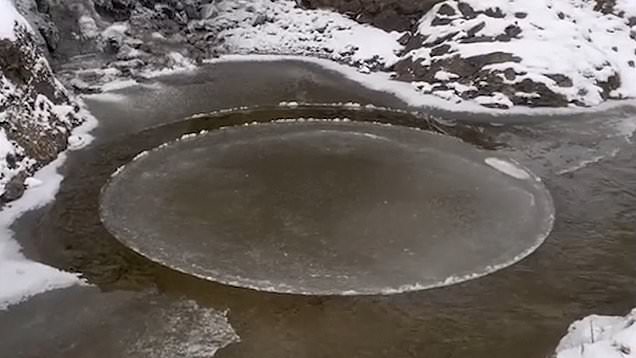 A hiker was able to capture an incredibly rare ice disk while on a mountain walk in the Scottish Highlands.

Dan Brown, 32, from Dunoon, was hiking up Beinn Bhuidhe when he came across the circular ice sheet.

Ice disks are formed from the river’s current and vortex beneath the frozen surface, which can cause spinning.

He said: ‘I was hiking Beinn Bhuidhe, a Munro at the head of Loch Fyne, with my father.

‘Visibility wasn’t great, but after about an hour-and-a-half the snow stopped and cloud cover started to clear.

‘We took a break to fill our water bottles from the burn by the track – that’s when we noticed the ice disk slowly spinning at the foot of a small waterfall.’

Both Dan and his dad had never seen or experienced an ice disk in the flesh, and were taken aback.

He added: ‘Neither of us had ever seen anything like it, a perfect circle of ice slowly rotating in the water, so we thought it must be a rare occurrence and took some photographs and videos.

The circular sheet of ice is seen in a glen on the mountain of Beinn Bhuidhe, which is south of Lochan Shira and north of Achadunan (Picture: Dan Brown/SWNS)

‘We hadn’t encountered anyone else on the hike, it felt like we were the only people for miles around.

‘So then to happen across something so serene and perfectly formed, it felt surreal.’

The Met Office lists ice disks as, ‘a rare phenomenon that tends to occur in very cold oceans and lakes’.

‘They are most frequently seen in the Baltic Sea and around Antarctica but also form relatively frequently on the Great Lakes of the United States and Canada,’ the forecaster added.

Paddleboarders Paul Sundin and Tim Frater came across the stunning scene of ice pancakes forming across the water on Monday following a night of sub-zero temperatures.

They form when foam on a river begins to freeze and join together, and is sucked into a swirling current of water forming the circular shape.

…read more Source:: Metro        (Visited 1 times, 1 visits today)Rep. Barbara Lee’s political future left unsaid at Oakland BART ribbon cutting Renovations at the 19th Street BART station in Oakland are complete, and while the Uptown unveiling made for a nice photo opportunity for transit leaders…NHL trade deadline: Sharks will be busy, but how […]

John and Chrissy’s older two children are thrilled to have a sibling (Picture: Instagram) Chrissy Teigen has posted another picture of her newborn daughter Esti, who she shares with John Legend, and the cuteness is overwhelming. The model and, 37, Ordinary People singer, 44, welcomed their bundle of joy on Friday January 13, with John […]

Gallagher? Pulisic? Lukaku? The 16 players Chelsea could sell in the summer to help balance the books

Could Chelsea really sell Edouard Mendy, Christian Pulisic, Conor Gallagher and Romelu Lukaku this summer? (Photo: Getty) Chelsea have embarked on an unprecedented spending spree, with their deadline day, British record signing of Enzo Fernandez bringing their total outlay for the season to £550million. While Todd Boehly may have improved the Blues’ squad, it has […]