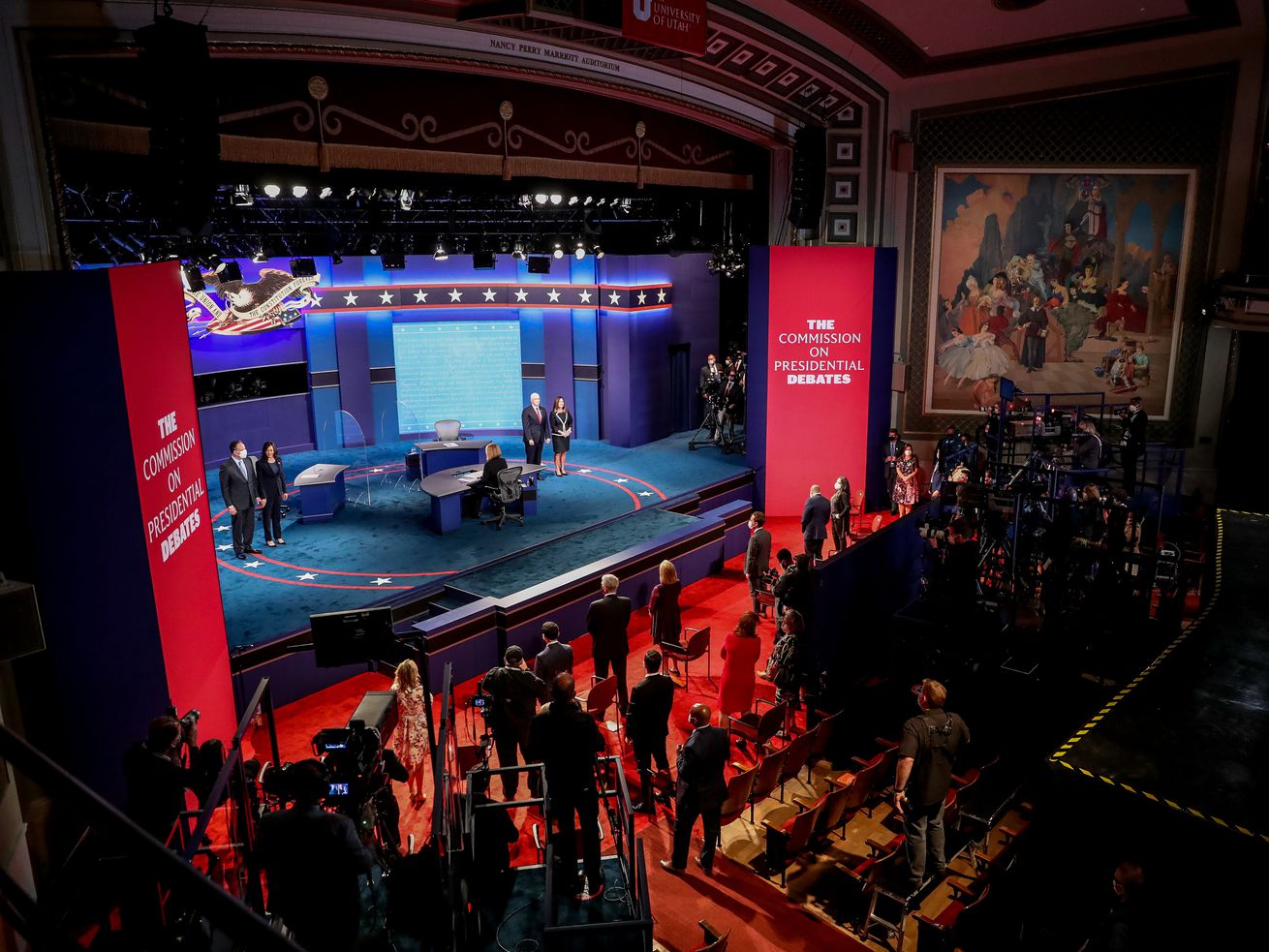 Democratic vice presidential candidate Sen. Kamala Harris, D-Calif., is greeted by her husband, Douglas Emhoff, while Vice President Mike Pence is greeted by his wife, Karen, at the end of the vice presidential debate, moderated by Susan Page, at Kingsbury Hall at the University of Utah in Salt Lake City on Wednesday, Oct. 7, 2020. | Spenser Heaps, Deseret News

Kamala Harris and Mike Pence each looked presidential, but both clearly had plans to ram home certain points regardless of the question asked

If nothing else, Wednesday’s vice presidential debate at the University of Utah made debates watchable again. If that ends up being Salt Lake City’s debate legacy, it is one to be cherished.

Admittedly, the bar for a good debate was low in the wake of the first presidential encounter between President Donald Trump and Vice President Joe Biden, which was marred by constant interruptions, insults and no coherent explanation of policy positions.

Wednesday night’s debate was civil, but sadly lacked direct responses from the candidates to specific questions.

And by the time moderator Susan Page got to the final question of the night — an excellent one from Springville, Utah, 8th grader Brecklynn Brown about how to end all the anger and violence in politics — it almost seemed a week too late.

It might have fit better if posed to Trump and Biden. However, it remains an extremely relevant question that expresses the frustrations of many Americans who long for more cooperative government, and for the goodwill that recognizes the opposing party also has the nation’s best interests in mind.

It may have stolen the show.

Not that Wednesday’s debate between Sen. Kamala Harris, D-Calif., and Vice President Mike Pence was a perfect display of civility. Americans saw plenty of sarcastic facial expressions and head shaking, a few interruptions and constant violations of time limits, mostly by Pence.

American people got some discussion of issues and ideas. And the candidates entered the debate with one common goal, to look presidential. Unlike any other presidential election in history, this year’s vice presidential candidates deserve extra scrutiny due to the ages of the presidential candidates. If reelected, Donald Trump would be 74 on inauguration day. Joe Biden turns 78 next month. Both of their running mates needed to act as if they could be trusted with the leadership of the nation, if necessary.

On that score, both Harris and Pence succeeded. Neither appeared rattled under pressure. Each delivered positions, arguments and accusations calmly. Even their occasional indignations were controlled. They weren’t just addressing each other. They were showing Americans how they could be expected to react under the pressures of leadership, or when confronting belligerent foreign adversaries.

Still, much more could have been accomplished.

Will Joe Biden and Kamala Harris packed the Supreme Court?

Do President Trump and Vice President Pence have a plan to keep coverage of preexisitng medical conditions?

Pence changed the subject when questions were asked about the lack of social distancing and mask wearing at White House events. He declined to directly confront …read more

Summary List Placement LinkedIn can be a terrific place to build your brand, expand your network, attract new clients, and find job opportunities. In fact, a professional LinkedIn profile and compelling message could earn you your next job offer. Director of Marketing at career advice and jobs listing site The Muse, Elliot Bell, earned his […]

Summary List Placement Growth stocks have stolen the show in the market over the last handful of years. That has only become more true this year, as mega-cap tech companies have surged to eye-popping valuations amid the stay-at-home environment. But according to Sandi Bragar — managing director at $12 billion wealth manager Aspiriant — growth […]

Summary List Placement Singapore’s largest and most expensive penthouse is changing hands for $47 million.  But that astronomical price tag represents a loss of around $7 million, or 13%, for the seller James Dyson, the vacuum cleaner billionaire. Dyson bought it in July 2019 for a a reported $54 million. The penthouse occupies the top […]