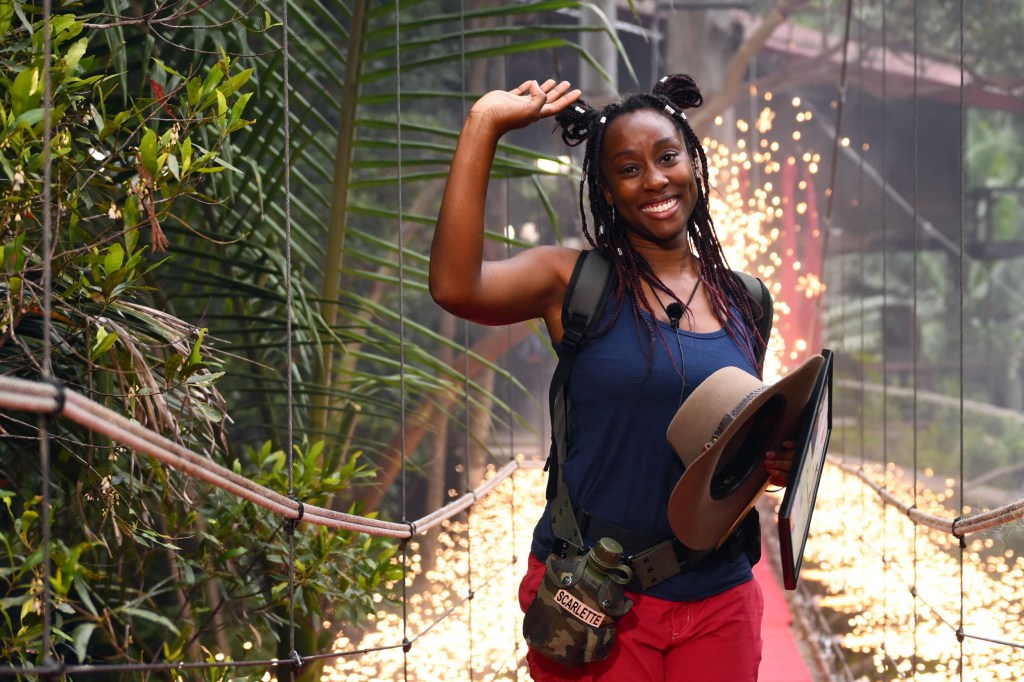 Scarlette Douglas was the second celebrity to leave the jungle, after Charlene White (Picture: James Gourley/ITV/Shutterstock)

Many I’m A Celebrity…Get Me Out Of Here viewers have been left angry after the British public voted Charlene White and Scarlette Douglas – two Black women – out of the jungle first.

Loose Women star Charlene was the first star to leave the jungle, making her departure on Friday.

Fans were then shocked by A Place In The Sun star Scarlette being voted next to leave on Monday. It was between her and Babatunde Aleshe to leave (although hosts Ant and Dec confirmed the names are read out ‘in no particular order’, meaning he didn’t necessarily receive the next lowest amount of votes).

Some have accused the voting public of racism.

Another said: ‘The first 2 out of I’m a Celebrity are black women. Hancock is still there. Be ashamed British public’.

‘People are so obviously racist. the first two people to leave are black women and in the odds one of the people most likely to leave, is a black man. im actually sick of this, theres never been a black winner either. this was supposed to be the year, with scarlette,’ one more said.

The first 2 out of Iâm a Celebrity are black women.

Hancock is still there.

#ImACeleb A whole MATT HANCOCK is still in the jungle, the man was supposed to be in charge of your safety, he gambled with your lives, and selfishly put his own needs ahead of the will of the British publicâ¦.but oh no, no, letâs get all the black women out first ð¤® ugh. Gross.

So two black women have left #ImACeleb , shows you just how racist this country is. Horrendous. Let me guess, will Baba be gone tomorrow?! Hate to be controversial but it needs to be said. Scarlette did NOT deserve to go.

Another added: ‘If you still need proof that racism is very much alive and kicking in this country, two black women have now been consecutively voted out and the only black man in the jungle was in close danger of leaving. Still think we’re pulling the race card, boomers?’

Others have argued that race was likely not a factor in the stars’ departures.

Fleur and Vito might have celebrated their scores a little too much! (Picture: BBC) Strictly Come Dancing star Fleur East had plenty of reasons to celebrate after her rumba… but perhaps she celebrated a little too hard. The former X Factor star danced a sultry routine with pro partner Vito Coppola to Too Lost In […]

Brazil will do battle with Serbia later today (Picture: NELSON ALMEIDA/AFP via Getty Images) Brazil get their World Cup 2022 campaign underway against Serbia this evening. The South Americans start the tournament as one of the favourites to get their hands on the trophy and win a record-extending sixth World Cup. Tite’s squad is packed […]

The actor won a Golden Globe for his performance in the series (Picture: Rob Latour/Rex/Shutterstock) O Yeong-su, who played Oh Il-nam in the Netflix hit drama Squid Game, has been indicted on charges of sexual misconduct, it’s been reported. Last year, the South Korean actor gained worldwide fame for playing the role of 001, an […]