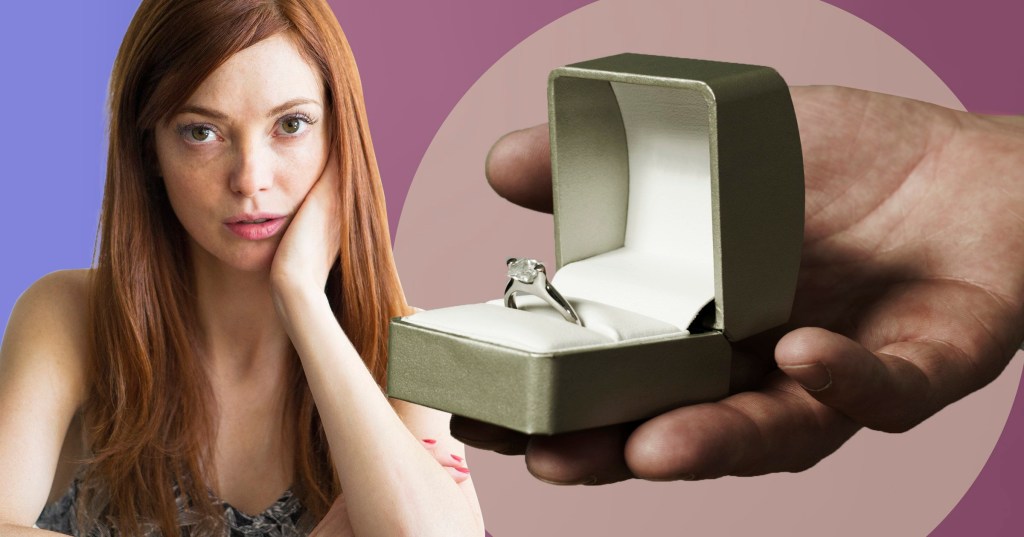 False promises are no way to build a strong relationship (Picture: Getty)

When you get to a certain point in a relationship, questions from family and friends about popping the question are inevitable.

Pressure can mount or the shine of an engagement can be dulled by outside judgements, but the key to getting past this is frank conversation with your partner about where things are going and when.

Although there’s naturally a level of secrecy surrounding proposals, it’s not a great sign if it comes completely out of the blue. If you aren’t on the same page before this life-changing decision, this could be a red flag.

Some people may be reluctant to talk about the prospect of engagement as they’re keen to keep up the element of surprise, while others are worried about tangible issues like money.

Some, however, are what we’re calling ‘rock-teases’; who dangle a potential proposal in front of their partner but never actually go through with it.

The rock-tease may mention that they were ‘ready to propose’ to deflect during an argument where they’re in the wrong, or suggest that they would pop the question if their partner ‘nagged’ or ‘pushed the issue’ less (but they have no real plans to do so).

It’s essentially a manipulation tactic, either to control the partner’s behaviour or put off commitment using false hope – like waving a carrot in front of a mule to make it walk but never letting it eat.

Psychotherapist Noel McDermott describes rock-teasing as a ‘pretty toxic trait’ that may be caused by attachment issues or even abuse in childhood.

He tells Metro.co.uk: ‘When people have attachment disorders for example, they may overcommit then back off due to becoming scared.

‘It’s also possible that it’s a deliberate control mechanism fitting more into the range of behaviours understood as coercive control.’

But even when it’s unintentional, this bait and switch can seriously damage a relationship.

‘There is a common phrase used for a range of behaviours like this in relationships called “come here get lost” and being on the receiving end is confusing and frightening, almost like a form of gaslighting the victim, who can then end up questioning their grip on reality.’

Broken promises are no way to build a solid partnership – especially when it’s a pattern designed to downplay your needs.

Traditions and stereotypes give one partner the power in a relationship (Picture: Getty Images)

There’s a gendered aspect at play here too, as proposals in heterosexual relationships are traditionally the responsibility of the man.

Women are expected to wait for the next step, which gives men the upper hand from the off. Alongside societal expectations that place stigma on a woman doing the asking, they may fear being labelled as ‘pushy’ for expressing their desires.

Has Nintendo become predictable? (pic: Nintendo) The Wednesday letters page reacts to the disappointing news about this year’s E3, as one reader laments the launch of Sports Story. To join in with the discussions yourself email gamecentral@metro.co.uk Cracking the codeCan’t say I’m too upset about the news with E3. I loved it in its heyday […]

Honour’s career is on the line after she paid a visit to see Eric behind bars – and things went seriously wrong! (Picture: Lime Pictures) Honour Chen-Williams (Vera Chok) could be set to lose everything in Hollyoaks after lashing out at incel Eric Foster (Angus Castle-Doughty), smacking him for what he did to Mason (Frank […]