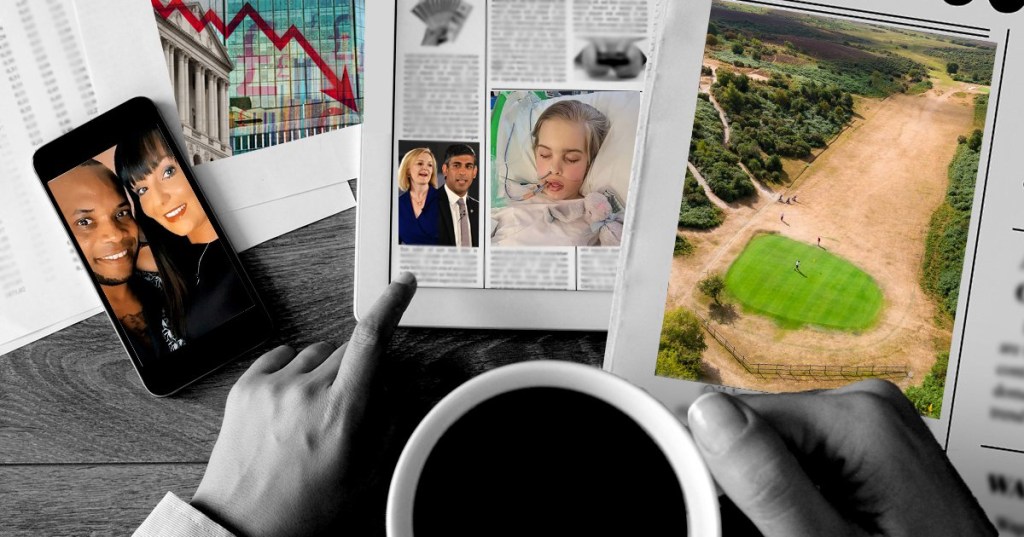 Metro.co.uk has compiled the last week into one article – for you (Picture: SWNS; PA; Getty)

The Lionesses treated the nation’s Sunday night blues with a perfect 2-1 tonic of success.

We strutted into work on Monday with the sounds of Sweet Caroline still echoing in our ears and a feeling of optimism wafting through the streets.

It was a happier time, oh was Sunday.

The news quickly took a turn for the worse and, if your post Euros-hangover put you off reading the papers, then never fear.

Metro.co.uk has compiled some of the week’s biggest stories in bitesize form for your perusal.

(That is it, there’s no ‘and relax’ to end that sentence. We’re in turmoil with a capital T.)

When the going gets tough, the tough gets tougher (Picture: Furlong/Getty Images)

We have an early Christmas present for you! No, it’s not too early to plan! Tins of festive chocolate are already on sale in Tesco for goodness sake.

The UK has been promised to be in the first stage of a recession by the end of the year – hooray. Cheers Santa.

It’s a headline that shouldn’t be a huge surprise based on the seemingly endless downfall of the country’s economy in recent months.

Rising energy prices, spiralling costs at the pump and fall-out from the war in Ukraine has all had major impacts have conspired against the economy, so it is said.

With the continuing squeeze of the country’s collective pockets, at this rate, a £7.20 tub of Lurpak really will be a luxury stocking filler.

TL;DR: All I Want for Christmas is economic stability

The verdict on Archie’s future was finally decided last night – nearly four months after he was found unconscious on April 7.

The 12-year-old has been ‘brain-stem dead’ ever since, say doctors.

Medics and judges have ruled attempts to continue treatment would be futile.

Archie’s life support is due to be turned off at 10am today after last-ditch appeals were made by his desperate family to attempt to reserve the decision.

Yesterday, a bid to have him moved from a hospital to a hospice was denied.

The toll of an ambulance trip between the two would likely be too difficult for his fragile body, it had been decided.

Following the ruling Archie’s mother, Hollie Dance, said: ‘All our wishes as a family have been denied by the authorities.

‘We are broken, but we are keeping going, because we love Archie and refuse to give up on him.’

The back and forth between medics, judges and Archie’s family will likely set precedent for how cases such as this are dealt with in the future – and whether they should even be in the public eye at all.

TL;DR: A verdict awaits for a case that has …read more

The country may have hit fever pitch when the Lionesses brought football home… but what happens next?

The Lionesses used every opportunity to drive attention towards its legacy, culminating in their historic 2-1 win against Germany (Picture: Naomi Baker/Getty Images) “We see this as only the beginning.” An open letter from our As the final whistle echoed around Wembley Stadium last Sunday alongside the jubilant roar of the crowd, it signalled a […]

Familiar faces make a welcome return but back on the Square, new horrors unfold (Picture: BBC) It’s like old times for Stacey Slater (Lacey Turner) and ex-husband Martin Fowler (James Bye) in next week’s EastEnders, as they head off on holiday together, albeit under very awkward circumstances. Should Kheerat Panesar (Jaz Deol) be worried as […]

Dawn Brett and husband David said their holiday was ‘horrific’ because of the construction (Picture: Caters News) A couple who claim their holiday was ruined by the construction site towering over their hotel are demanding a full refund. Dawn Brett and husband David, both 59, saved £5,100 for a two-week luxury holiday at the Riu […]