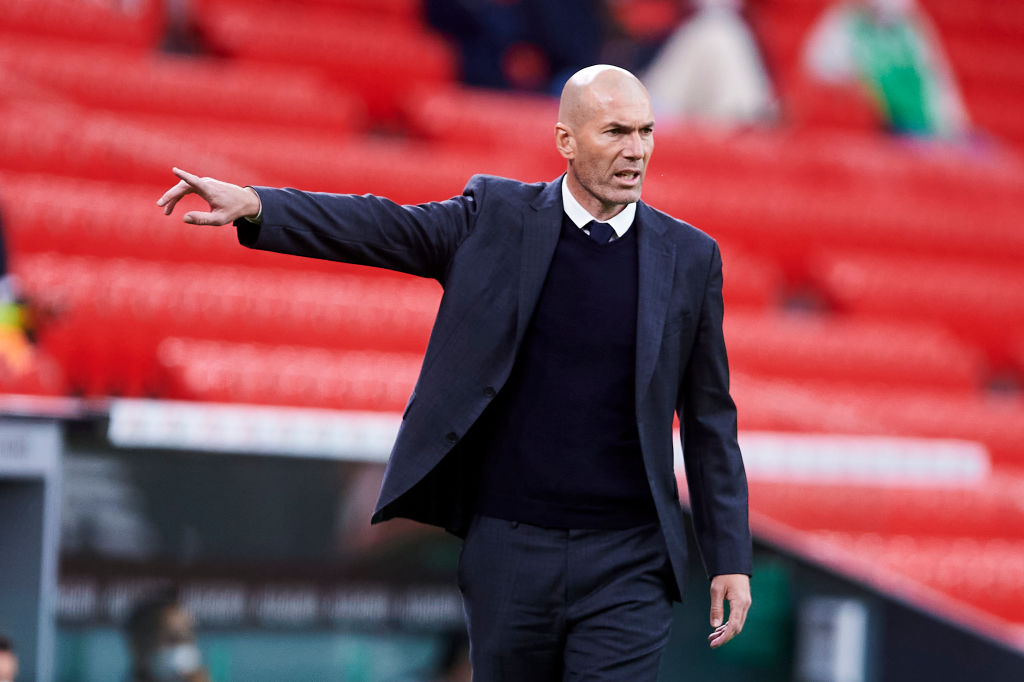 Zinedine Zidane has explained that he ruled himself out of the manager’s job at Manchester United because of the language barrier.

The 50-year-old has been out of work since leaving Real Madrid last year and was subsequently linked to Old Trafford following Ole Gunnar Solskjaer’s sacking.

Reports at the time suggested that Zidane was not interested in the job however, with the club eventually bringing Ralf Rangnick in as an interim coach, before appointing Erik ten Hag on a permanent basis.

Now, the 1998 Ballon d’Or winner has confirmed why exactly he turned down the chance to take charge of United.

‘Would I want to go to Manchester [United]? I understand English, but I’m not completely fluent in it,’ Zidane told L’Equipe.

‘I know that there are coaches who go to clubs without speaking the language, but I work in a different way. Many elements come into play in order to win, it is a global context. I know what I need to win.’

Zidane has only ever managed one club, winning two La Liga titles and three consecutive Champions Leagues over his two spells at Real, and also added that there were only, ‘two or three possibilities’, in terms of other clubs he would manage.

Juventus, who he formerly played for is rumoured to be one, while Paris Saint-Germain is also another option after he was heavily linked with replacing Mauricio Pochettino this summer.

‘Never say never, especially when you are a coach today,’ Zidane added.

‘When I was a player, I had the choice, almost all the clubs. Coach, there aren’t fifty clubs I can go to. If I go to a club, it is to win. I say this with all modesty. That’s why I can’t go anywhere.’

As for the third team, the Frenchman also revealed that it is his dream to coach his country, having won the 1998 World Cup and Euro 2000 as a player, saying: ‘I’m not finished with Les Bleus. I want to do it, of course.

‘I will be [France coach], I hope, one day. When? That’s not up to me. But I want to come full circle with the French national team.

‘I met this French team as a player. And it’s the best thing that ever happened to me. But really, it is the peak. So, since I went through that and now, I am a coach, the French team is firmly anchored in my head.’

‘If the opportunity presents itself after [the 2022 World Cup], I will be there. Once again, it doesn’t depend on me. My deep desire is there. The French national team is the most beautiful thing.’

MORE : Barcelona feel there is ‘no way back’ in Manchester …read more

Steve Davis is straddling the ‘totally different worlds’ of snooker and music (Picture: Redferns) Steve Davis has always kept his snooker and music lives separate, partly not to disrespect the two art forms, but also because no one else in the sport has the same niche taste in tunes as him. The six-time world champion […]

If only it were that easy (pic: Bungie/Metro.co.uk) Bungie’s Destiny 2 can be a fickle beast at times, not wanting to play ball with your connection. Here’s some tips on how to fix it. Ever tried logging into Destiny 2, only to be met with a dreaded error or horrednously laggy gameplay? Well, it might […]

Tom Hanks was back to laughing and joking during his appearance on the Late Late Show on Thursday, after a tense incident in New York. Footage emerged of the Forrest Gump star, 65, leaving a restaurant in New York beside his wife, Rita Wilson, and making a beeline for their car when fans approached the […]