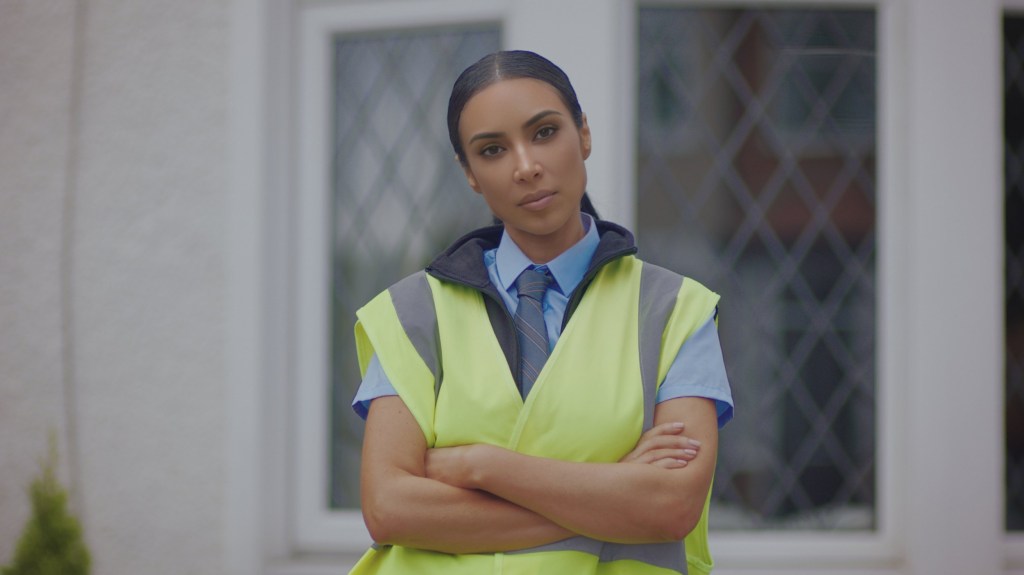 Impressionist Francine Lewis thinks Kim Kardashian has a good enough sense of humour that she won’t mind the fact that she’s being portrayed as a bus driver hailing from Catford in the new series Deep Fake Neighbour Wars.

While the real Kim is living a life of luxury in Los Angeles, her deep fake alter-ego, which has been created for the show, is a bit more blue collar.

Created by Spencer Jones, the six-part comedy series uses the very latest in AI (artificial intelligence) technology to turn the UK’s best impressionists into the world’s most famous celebrities.

Instead of starring in Hollywood blockbusters, walking the red carpets and splashing the cash on extravagant overseas holidays, these famous faces are now depicted as ordinary people who happen to be embroiled in petty neighbour quarrels.

Rather than owning a multi-million-dollar home, this version of Kim is shown house sharing with none other than a deepfake of Idris Elba… but things start to get a little tense when she starts making her presence known in their communal garden.

It’s a storyline Francine, best known for making it all the way to the final of Britain’s Got Talent in 2013, thinks Kim won’t mind.

The reality TV star is depicted as a bus driver living in Catford (Picture: ITV)

The deepfake version of Idris Elba gets wound up over a garden dispute with Kim (Picture: ITV)

‘She seems like she’s got a good sense of humour so I think she would find it funny,’ she said.

‘I think she will find the fact she lives in Catford and is house sharing with Idris Elba and is a bus driver really hilarious.’

Despite the neighbourhood disputes – which also sees Mark Zuckerberg wind up loved-up couple Nicki Minaj and Tom Holland, and dental hygienist Billie Eilish have some beef when Beyoncé starts working from home – Francine says it’s all in good fun.

‘I don’t think there is anything about any of the characters that anyone would be upset by or kick up a fuss,’ she added.

‘I think it has all been written really well.’

Although Francine initially jumped at the chance to take part, she was told that if her face didn’t fit the technology, she might not be cast.

‘I was excited from the second he [Spencer] mentioned it but he said to me, “Look I really want you involved but if your face doesn’t fit the CGI unfortunately we can’t use you”,’ she explained.

‘It has to be to the millimeter and fit every part of your face and if it doesn’t, it doesn’t work so I couldn’t get too excited about it.’

A book publishing insider thinks Virginia Giuffre’s book could be released just weeks before King Charles’s coronation (Picture: PA / Getty Images) It is thought Virginia Giuffre could release a book just weeks before King Charles’s coronation takes place. Ms Giuffre – who was then known as Virginia Roberts before she married – made a […]

‘It’s in our phone, in our hands, and it’s in our house’: Six women share their experiences of online sexual harassment

Bianca is now using her platform to call out creeps who message her inappropriately (Picture: Supplied) ‘Every morning when I wake up, I see a man’s penis I haven’t asked to see.’ Emily Atack begins her documentary, Asking For It, with this startling confession to camera. She then lifts up her smartphone and counts how […]

David pitched a pop-up chess set to the dragons (Picture: BBC) An unassuming entrepreneur who struggled with his nerves while pitching to Dragon’s Den has been branded a genius over his invention. David, a paper engineer, appeared on Thursday’s instalment of the BBC juggernaut series, vying to impress Peter Jones, Deborah Meaden, Sara Davies, Touker […]