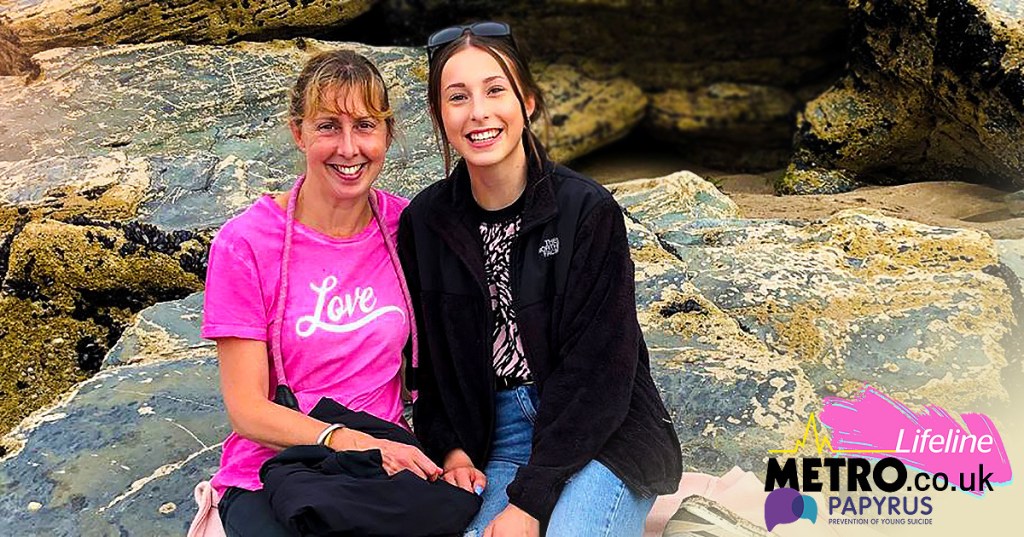 Debbie wants to raise awareness after the death of her daughter, Darcy (Picture: Debbie Hollinson)

On 14 April 2021, 17-year-old Darcy Grace Hollinson, from Tavistock in Devon, took her own life after grappling with worsening mental health.

While the pain of losing the ‘vibrant and beautiful’ Darcy still haunts her mother, Debbie, every day, she is now campaigning to start vital conversations about young people, mental health and suicide.

Heading off to Canada to take part a 10k run in honour of Darcy, mum Debbie will be using it as an opportunity to raise funds for suicide prevention charity PAPYRUS– Metro.co.uk Lifeline’s chosen charity for 2022.

Here, Debbie shares Darcy’s story and why she is so keen to raise awareness for the charity that helped her family through their darkest time.

‘Darcy was a really vibrant girl: she was confident, intelligent, funny and feisty. She had a wide circle of friends, and not just from school, but from Cadets, Brownies and Guides, as well as friends from all different schools. She was quite a strong person, she wasn’t the sort of girl you would imagine to struggle with her mental health.

But it happened fairly quickly. In less than two years, she went from being a really happy, bright, sociable and sparky girl and just hugely declined until she died. She was only 17.

Things started when Darcy was about 15, when I noticed she was struggling with social anxiety. I thought it was around school, so I spoke to her teachers, and they were great in trying to accommodate to some of her needs. Then the pandemic happened.

Darcy started to struggle with her mental health in her mid teens (Picture: Supplied)

Lockdown had a really bad effect on Darcy. She was at that age where teenagers want to socialise, have boyfriends and have some independence, and lockdown took all that away from her. She started to worry about what she looked like, and she began to believe she was overweight. She developed bulimia, and generally went off her food.

It was surprising as my daughter used to be quite body confident, completely at ease with herself. It was only when she got a little bit older, it would only take a couple of comments from people who aren’t really thinking what they’re saying.

Social media is there 24/7, pushing out images of what the perfect body is supposed to look like. When you’re young, you’re so influenced by what people think you should look like. I think that has a massive impact on Darcy.

As her struggles continued, we tried to get her some help through the Child and Adolescent Mental Health Services (CAMHS), but it was difficult. Because of the pandemic, we couldn’t see anyone face to face. We would have sessions over Zoom but Darcy had problems engaging with people she didn’t know on a video call, so it was really tough to get the right help.

Ice ice baby (Picture: Aldi/Getty/Metro.co.uk) Is there anything worse than realising you’re out of ice on a hot summer’s day, or when hosting guests? The good news is that a returning Aldi product promises ice shortages to be a thing of the past. Following its popularity last year, an ice cube-making machine is now being […]

The couple faced an alleged stalking at their daughter’s school last year (Picture: Getty) The Beckham family are said to have feared for their safety following ‘stalker’ incident at school. Football star David Beckham was left feeling ‘threatened’ and ‘frightened for the safety of his family’ after an alleged stalker, who believes she is the […]