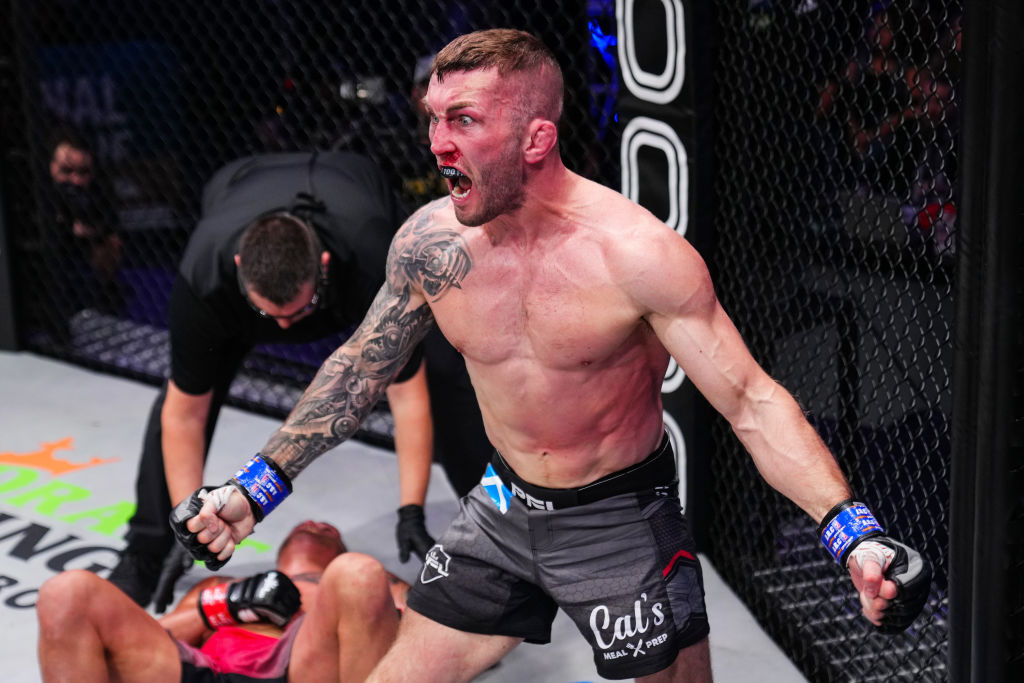 Two years on from leaving the UFC, Stevie Ray stands on the brink of becoming Scotland’s first MMA world champion.

‘Braveheart’ walked away from the sport in September 2020, less than a year on from a career-best win over Michael Johnson having just signed a new contract with Dana White’s promotion.

A chronic knee issue refused to go away and at the time, the Scot felt there was no way back. Having been told by doctors he would not fight again, it signalled a premature end to his story with UFC but a comeback with the Professional Fighters’ League this year offered him a route back to the top.

Back-to-back wins over former UFC lightweight champion Anthony Pettis in the summer saw him book a place in Friday’s PFL final title showdown against Olivier-Aubin Mercier, with the world title belt and a cheque for a cool $1million awaiting for the winner.

It is a remarkable turnaround for the 32-year-old who now stands on the brink of joining Liam McGeary, Michael Bisping and Leon Edwards as MMA’s British world champions from major promotions and the first north of the border.

‘For a little while I did think I might be done,’ Ray told Metro.co.uk. ‘There were no offers coming through, the offers that were coming through were not even worth my while until the PFL came along. When I got the offer, we got to work and it is paying off now.’

Recalling his UFC exit, which was compounded by a private dispute with the promotion, he added: ‘It was a bit upsetting when it happened but s**t happens, it is what it is.

‘I can feel sorry for myself and I did for a while, I felt it was unfair. I had just won the biggest fight of my career but I have just proved them wrong and a lot of other people as well.

‘A lot of people retire and then come back and can’t do it well, but what I have done proves I wasn’t ready to retire. It was an emotional decision. I have just won two of the biggest fights of my life on paper and in general, and now I feel like I am in the prime of my career. It feels good.’

Ray’s first fight in two-and-half years ended in disappointment in April, on the wrong end of a unanimous decision defeat to Alexander Martinez on his PFL debut.

‘I went in trying to win and was forgetting silly things,’ he recalled. ‘At the end of the fight, I knew I had lost the decision.’

What followed were two victories over Pettis, the PFL’s marquee signing in 2021, in the space of six weeks, both career-best wins in their own right having superbly submitted the American in June and sealing unanimous decision win …read more

Iranian photographer destined for World Cup vanishes after being arrested

Piers Morgan hasn’t held back with his comments on Matt Hancock (Picture: Vianney Le Caer/Piers Morgan Uncensored/REX/Shutterstock) If there’s one person Piers Morgan probably could have done without bumping into at Heathrow airport, it’s Matt Hancock. The former health secretary has seemingly touched down in the UK after his widely-criticised stint in the jungle. Meanwhile, […]

Police are seen on horseback outside the stadium prior to the FIFA World Cup Qatar 2022 Group C match between Argentina and Saudi Arabia (Picture: Getty Images Europe) Fifa has asked police in Qatar to not treat women as criminals if they report rape or sexual assault during the World Cup, according to a new […]