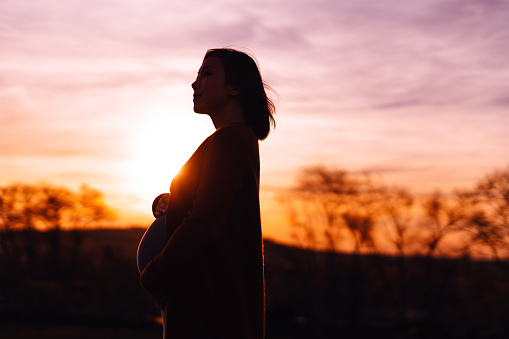 Until recent years, surrogacy has often been seen as taboo (Picture: Getty Images)

The clock had just struck 1am at Dorset County Hospital when Rosie Mead gave one final huge push and brought a beautiful little girl into the world.

But instead of picking her up for some skin-to-skin contact, another couple bundled the baby away into a separate room for this all-important bonding ritual, leaving Rosie to deliver her placenta before being stitched up, the gas and air barely taking the edge off the pain.

Once she had been cleaned up, Rosie recalls how she simply sipped a cup of tea and had some toast, as she felt the warm glow of knowing that she had just fulfilled a life-long ambition.

‘I had always wanted to be a surrogate since I was a teenager, after seeing Phoebe on Friends and realising it was possible,’ Rosie remembers. ‘Watching how she had lots of support kind of normalised it for me.

‘Obviously Phoebe’s story was very different and they played it for comedy, but it did make me see that it was a really selfless act. If I could have my own children, then it was always something I had wanted to do.’

Until recent years, surrogacy, where a woman carries a baby for another couple who are unable to conceive or carry a child themselves, has often been seen as taboo.

However, with an increasing number of celebrities speaking openly about taking this route to parenthood – including Nicole Kidman, Khloe Kardashian, Olympic diver Tom Daley, and most recently, Paris Hilton,- it’s becoming an alternative route to parenthood. And not one just the preserve of the rich and famous.

According to recent figures, the number of parents having a baby via surrogate in England and Wales has almost quadrupled in the last 10 years. The report by the University of Kent and My Surrogacy Journey shows that two-thirds of applicants are now mixed-sex couples often in their 30s or 40s.

Unlike countries such as the US, where commercial surrogacy is permitted in certain states, it is illegal to pay a woman to act as a surrogate in the UK, apart from ‘reasonable expenses’.

So what motivates a woman to carry a child for a complete stranger?

For Rosie, it was after giving birth to her second child in 2017, that she felt the time was right to revisit the idea of surrogacy, with the support of her husband Jon.

She joined a Facebook group run by Surrogacy UK and connected with a mixed-sex couple who lived just 30 minutes from her Dorset home.

After getting to know the couple, including arranging playdates with their children, Rosie, decided she wanted to be a surrogate for the pair.

Rosie recalls how some of her …read more

Ekin-Su Cülcüloğlu feeling ‘blessed’ after surviving first Dancing On Ice skate-off against John Fashanu: ‘Thank you for believing in me’

Ekin-Su Cülcüloğlu and Brendyn Hatfield survive to skate another week! (Picture: Matt Frost/ITV/Shutterstock): Ekin-Su Cülcüloğlu has let out a massive sigh of relief after surviving the first skate-off of Dancing On Ice 2023. The Love Island winner, 29, went up against former pro footballer John Fashanu, 60, in the bottom two. But, after both couples […]

A 60-year-old man died after a spectator fight broke out at the Alburgh Community Education Center (Picture: WCAX) A 60-year-old man died after getting involved in a large fight at a middle school basketball game. Russel Giroux required medical attention after the brawl with several spectators at the seventh and eighth grade basketball game at […]

Martin was last seen in 2018 (Picture: ITV) We last saw Martin Platt (Sean Wilson) – former husband of Gail (Helen Worth) and father of David (Jack P. Shepherd) – in Coronation Street in 2018, when the character returned in the aftermath of the harrowing storyline that involved David being raped by Josh Tucker (Ryan […]