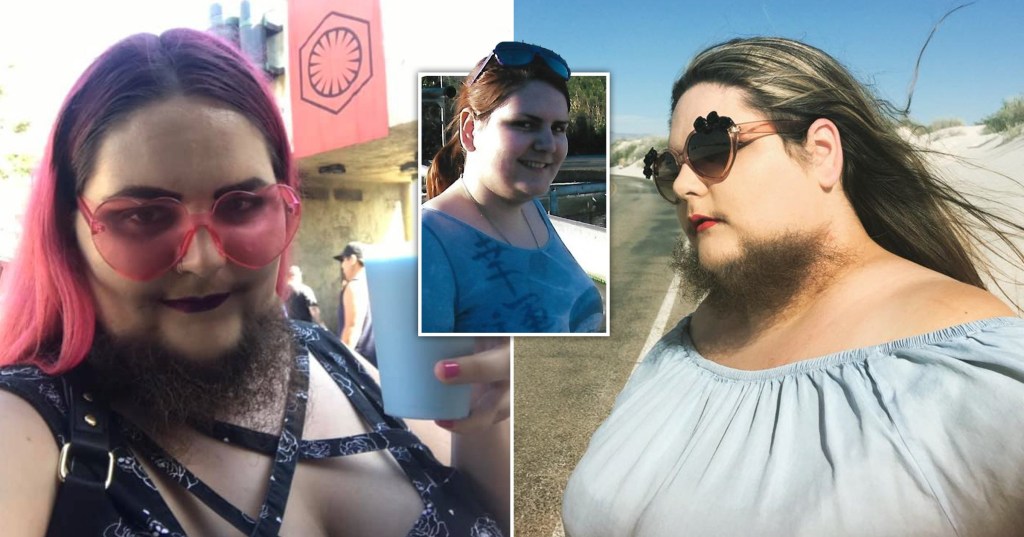 The moment Dakota Cooke, now 30, hit puberty, she noticed masses of hair growth on her face.

Soon enough, she was committed to having weekly waxing appointments and shaving their face twice a day in an effort to look more feminine.

Dakota spent years feeling judged and insecure about her hair growth, and fell into a decade of anxiety and low self-esteem.

Despite going for several tests, it’s unclear what caused Dakota’s facial hair, but doctors believe it to be something to do with her adrenal glands producing elevated levels of testosterone.

The circus performer said: ‘When I hit puberty at 13, I guess I got hit with a little bit extra.

‘It started out with peach fuzz on my face that started to get longer and dark.

Dakota spent years hating the way she looked and doing everything she could to remove her facial hair (Picture: Mercury Press)

‘A friend of the family pointed it out at the time, so my step dad took me to the doctors to do tests, and then took me to the hair salon where I had my first ever wax.

‘It was super uncomfortable, and at the time, I was just about learning how to shave my legs.

‘I grew up in a period where women with facial hair was so stigmatised that the women at the salon were telling me how girls aren’t supposed to grow facial hair.

‘I guess that stuck with me, because for the next ten years, I kind of just sunk into this shame spiral where I’d try and hide my face in photos and be attending waxing sessions every week.

‘It got to a point, when I worked one of my first jobs in retail, that I was shaving my face twice a day, once in the morning and then on my break because the hairs were just so visible, and I was working in the makeup department where it wasn’t acceptable to be anything other than a stereotypical woman.

‘I’d be covering the shaving scars and rash with makeup and my face would just be so irritated and red all of the time.

‘I’ve probably still got some of those shaving scars to this day.’

Everything changed in 2015, when Dakota was at a party with a friend, who told them about working in the circus.

In 2015, she decided to experiment with letting her beard grow in (Picture: Mercury Press)

Dakota fell in love with the idea of being a bearded lady in the show, and so decided to ditch the razors and waxing and let her facial hair grow in.

‘That was really the catalyst that began my journey to loving myself and my beard,’ she remembered.

‘Growing my beard out was quite uncomfortable at first, it took a lot of effort not to just cut and shave it off again.

‘I remember the first time someone tried to take …read more

Call Sherlock Gnomes, there’s a garden ornament-based mystery afoot (Picture: SWNS) A group of gnomes have ‘invaded’ a couple’s garden – with no explanation as to where they appeared from. Christine Lock and husband Stephen have seen six of the ornaments randomly turn up in the last 18 months. All variety of gnomes have graced […]

Jamie Redknapp believes Chelsea are three signings away from guaranteeing a top four spot (Picture: Sky Sports) Jamie Redknapp is confident three major singings between now and the end of the transfer window would guarantee Chelsea a place in the Premier League’s top four this season. The Blues have endured a difficult summer but have […]

Edinburgh Fringe 2022 dates: How long does the festival last and where to buy tickets

Tropicana The Queer Comedy Cabaret is one of many shows on at the Edinburgh Fringe this year (Picture: Jeff J Mitchell/Getty Images) If you love art, theatre, music, circus acts and comedy, then you’ll probably want to attend the Edinburgh Fringe. Every year in August, the Fringe – often dubbed as the biggest cultural arts […]