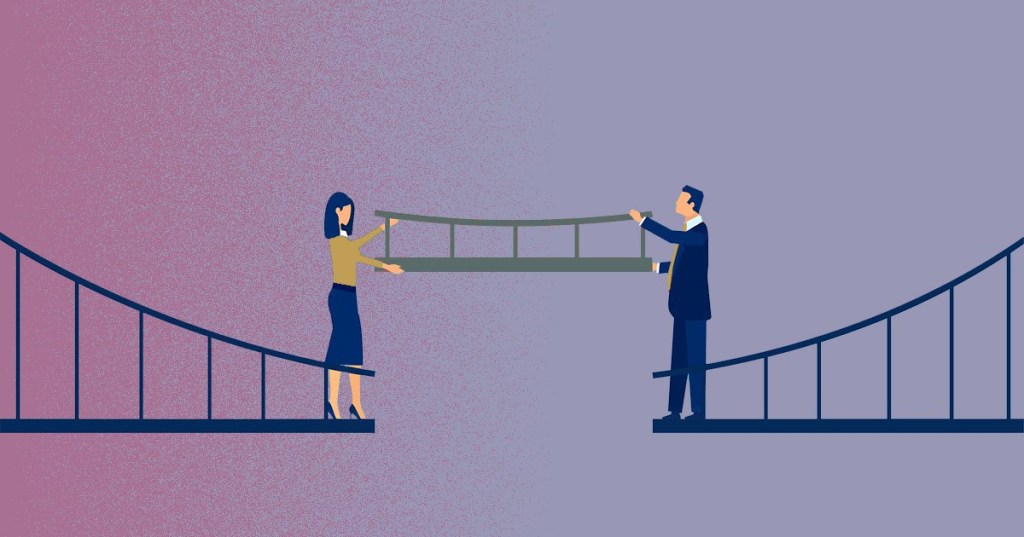 Is it safe to build bridges? (Picture: Getty)

Only you can decide when forgiving an estranged family member is a suitable option, and coming to that decision isn’t easy.

Naturally, there are some bridges that aren’t meant to be rebuilt.

But what can it look like when reconciliation could actually be on the cards?

Counselling Directory member Anthony Purnell tells Metro.co.uk that the original reason for a fallout can sometimes become less important when something seismic happens in the family.

He explains: ‘This can put into perspective the importance of family connections. If there is a mutuality in this, then the parties have good ground on which to build.

‘All parties may feel that they have processed their anger surrounding a disagreement and feel in a place where they can discuss it openly, whilst also keep sight of the ultimate goal (reconnection) and be able to genuinely put the disagreement behind them.

‘There is maybe a sense that it feels safe to engage in the process of reconnection in respect of what effect this may have on other family members.

‘Disagreements are not seldom contained to those that are directly embroiled in them and can position family members as “allies” or “foes” who may see the reconnection as either a welcome development or as some kind of betrayal.’

Rather than a disagreement, let’s say someone in the family has wronged us, and their transgression is the root cause of the estrangement – what then?

Anthony says: ‘My own philosophy lies with the old saying “actions speak louder than words”, and the difference between espousal (what I say…) and embodiment (what I actually do…).

‘It is not enough that someone says sorry or that they will change, there needs to be evidence through changing our behaviour.’

And what about the red flags that could mean building bridges isn’t a great idea?

Anthony says these include: ‘A refusal to acknowledge any wrongdoing (within reason).

‘If any form of abusive behaviour is still present (physical, emotional, financial).

‘In instances where there is nothing to be gained from the relationship, or it is exploitative. In couples therapy counsellors talk about the give and take (emotional, financial, functional) – one-sided relationships can be draining.

‘And if your motivation to reconnect is based on the wishes of others. The reconciliation provides comfort for them but still has a detrimental effect on the family members in conflict.’

When asked about things that should never be forgiven, Anthony adds: ‘I would say that any behaviour that was so extreme (for example, sexual abuse, physical violence) that it caused an individual severe harm would mean that person would be in the right to not grant their abuser forgiveness.

‘Other than that, the decision to grant forgiveness lies with the one who has felt wronged.’

How to go about reconciling

So, if you’ve clocked green flags instead of red ones, here’s how you should proceed.

Scott and Charlene returned to Neighbours for the final episode on Channel 5 (Picture: Fremantle Media) Acting legend Jason Donovan has reacted to the news Neighbours has been saved by Amazon Freevee. The star, known for a variety of TV and theatre roles, developed his craft on the Australian soap playing the role of Scott […]