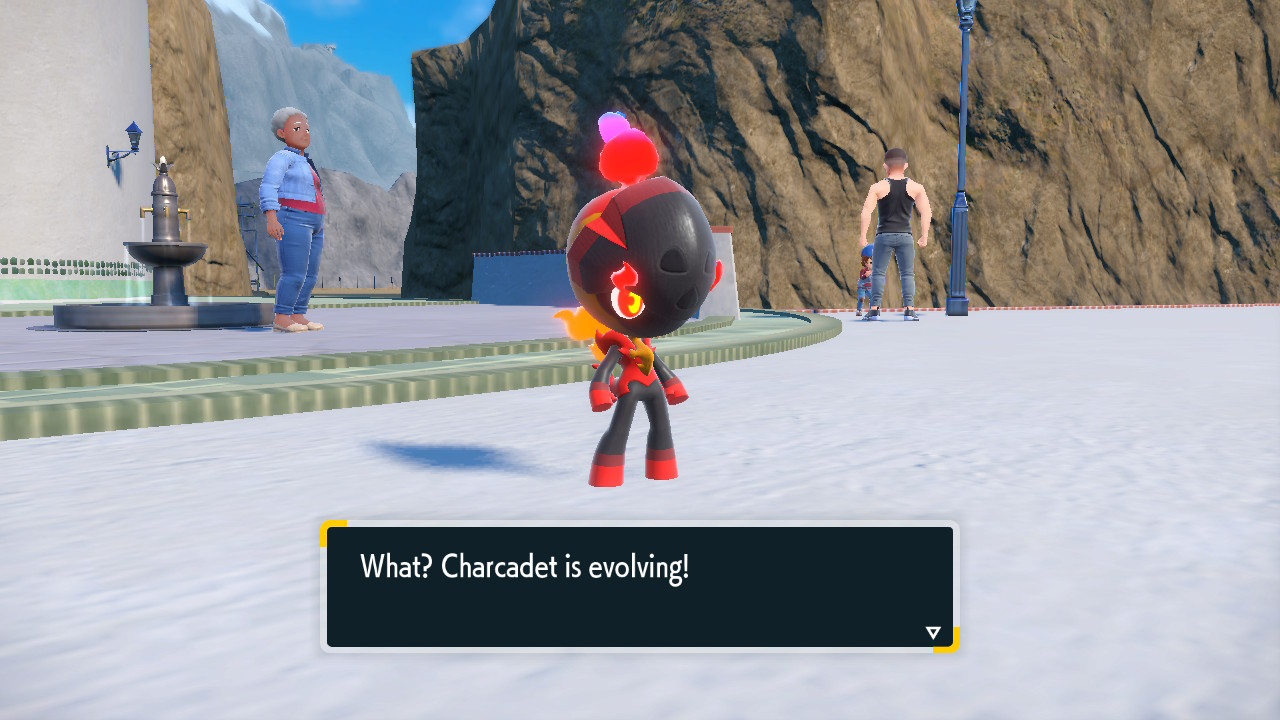 Charcadet is one of the coolest new critters in Pokémon Scarlet and Violet, with a very unique evolution method.

Charcadet is one of the new pokémon of Generation IX that’s available across both Pokémon Scarlet and Pokémon Violet, but has different evolutions depending on which version you have.

It’s a small but mighty Fire type creature that can evolve into an Armarouge, a Fire/Psychic pokémon in Scarlet, or into a Ceruledge, a Fire/Ghost pokémon in Violet.

However, evolving your Charcadet takes a few more steps than usual, regardless of which version of the game you’re playing on your Nintendo Switch.

Although it’s listed ‘very rarely seen,’ even more than adorable Eevee, Charcadet hangs around many parts of Paldea, most frequently found on the southern end of the map.

Once you see its bright red colour on the horizon, make sure to consume items that boost catching Fire-type pokémon, to get a head start on the battle.

As soon as you catch it, head straight to Zapapico, which is a smaller city located in the eastern region of Paldea, west of the area where the Lurking Steel Titan challenge takes place.

There you must look around to find a man in a plaid shirt who is looking to make a trade – we promise you he’s legit.

Charcadet can either evolve into an Armarouge or a Ceruledge (pic: Bulbapedia)

If you’re playing Scarlet, you need to trade 10 Bronzor Fragments for Auspicious Armour, whereas in Violet you must trade 10 Sinistea Chips for Malicious Armour. Both Bronzor and Sinistea can be found relatively early in the game, though in very limited spots.

The fragments and chips that you’ll need to evolve Charcadet, drop whenever you defeat either of them in battle in the wild, so you can simply use the auto-battle option to easily defeat them.

When you collect the crafting items, go back to the man and trade them to receive their respective armour.

You’ll be happy to find out that there’s no level requirement for evolving a Charcadet, so you can go ahead with it early in your journey.

There’s also a way to get the Charcadet evolution that’s not available in your game, to, for example, get a Ceruledge even though you’re playing Scarlet.

You can use two tricks to do that. The first method is asking a friend to give you the evolved form of Charcadet you don’t have access to.

The second method is having your friend equip the armour set you need to a random pokémon and then trading that pokémon.

Your friend will probably want them back after you’re done, but that …read more

To view this video please enable JavaScript, and consider upgrading to a web browser that supports HTML5 video Stormzy has surfaced again on Instagram after the excitement of the MTV EMAs and meeting Taylor Swift, sporting dark glasses and revealing he manged to miss his flight. The pair crossed paths at the glamorous awards do on […]

England head coach Eddie Jones gives fly-half Marcus Smith a consoling arm (Picture: PA) If the roles were reversed, New Zealand said they would have gone for it. Seventy minutes on the clock, and I defy anyone not to have taken a draw against a dominant All Blacks side who had played as well as […]

Why did I’m A Celebrity’s Chris Moyles leave BBC Radio One and what has he done since?