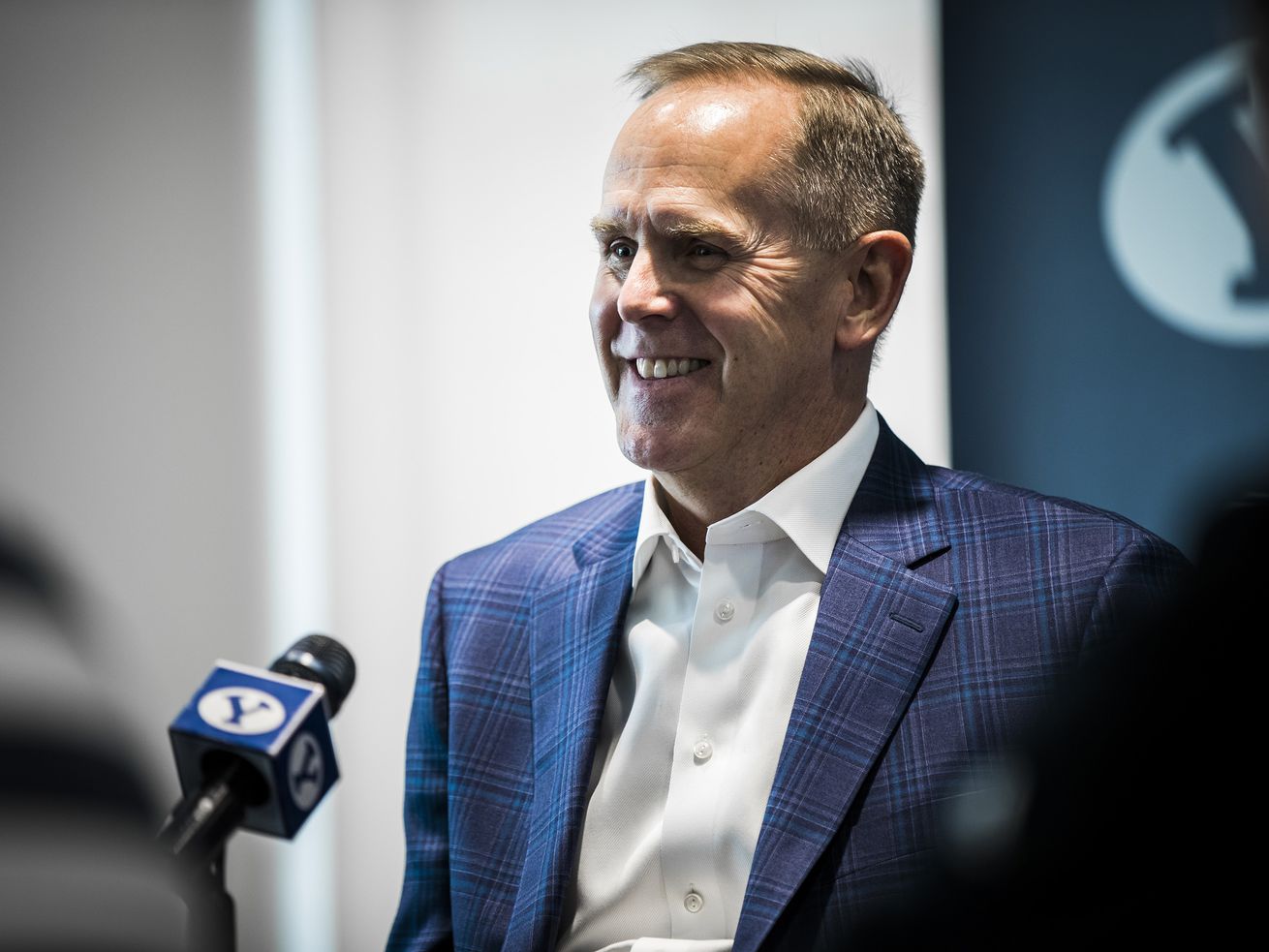 Holmoe is grateful for fans’ sacrifices, and other schools, to make this football season possible

PROVO — As opposing teams were disappearing from the BYU football schedule like Cougartails at a tailgate party, athletic director Tom Holmoe was saddled with a laborious job — trying to find programs willing to play during a pandemic.

At one point last summer, the Cougars, who are 3-0 and ranked No. 15 in the country, were down to two opponents — Houston and North Alabama. Holmoe replenished the schedule with 10 games, not including the Army contest that was postponed in mid-September.

Last week, Holmoe revealed what it was like going through the rescheduling process, and he also addressed other salient topics, during a 38-minute question-and-answer session with members of the media via Zoom.

Here are some excerpts from that interview:

Question: How has putting together a new schedule in a short period of time changed the way you’ll schedule in future?

Holmoe: It’s an asterisk year in scheduling. There were so many rules that were broken. Not ‘legal’ rules. You just need so much assistance. You need a lot of people taking some risks with you and you take risks with them. These games are scheduled out so far in advance that even if I learned something I probably wouldn’t be able to change it until 2030. One really good thing that’s come out of it is there are way more conversations occurring with athletic directors and that’s been a real positive. I’ve spoken with ADs on multiple phone calls about games that we’ll never play. Some people say, ‘Well, that’s a waste of time.’ No, it’s not. It’s a great connection. We’ve learned, we’ve shared best practices during COVID even though the games never really came to fruition. If I’ve learned anything, it’s I probably could improve my communication with other ADs and my connections with other ADs. I’m going to call other ADs and just ask how their golf game is going. How’s their family? Athletics have become a big business now. During this COVID time, I think we’ve all taken a step back and gotten back to the old-school relationships, which I appreciate.

Q: What is the athletic department doing to try to recoup revenue at a time when fans can’t attend games?

Holmoe: Most of the schools across the country are realizing there are two parts to the equation — one is reducing your expenses and the other one is to try to find creative ways to increase your revenue. Those are both difficult challenges. We’re undertaking both of those right now. Some of them are in the works and some of them are on whiteboards. Those challenging times of not being able to put people in the stands without …read more

Business Insider is proud to announce that Blake Chandlee will speak at the inaugural BI Global Trends Festival, a virtual event taking place the week of October 19-23, 2020. Summary List Placement Chandlee is the VP overseeing all of TikTok’s ad partnerships, sales operations, and anything the app does to generate revenue — making him […]

Summary List Placement Sodastream is offering up to 40% off popular Jet and Fizzi products and bundles for Amazon Prime Day 2020. Sodastream seltzer machines are an environmentally and budget-friendly way to make fizzy beverages at home.  The Sodastream Fizzi was named the best user-friendly soda maker in our guide to the best soda machines, […]

Summary List Placement On a typical day, a portion of the 200 self-driving cars in Cruise’s fleet roam the streets of San Francisco, each for a few hours at a time, continually gathering data on road conditions, pedestrian activity, and the behavior of other drivers. While there are humans in the front-seat, the car is […]