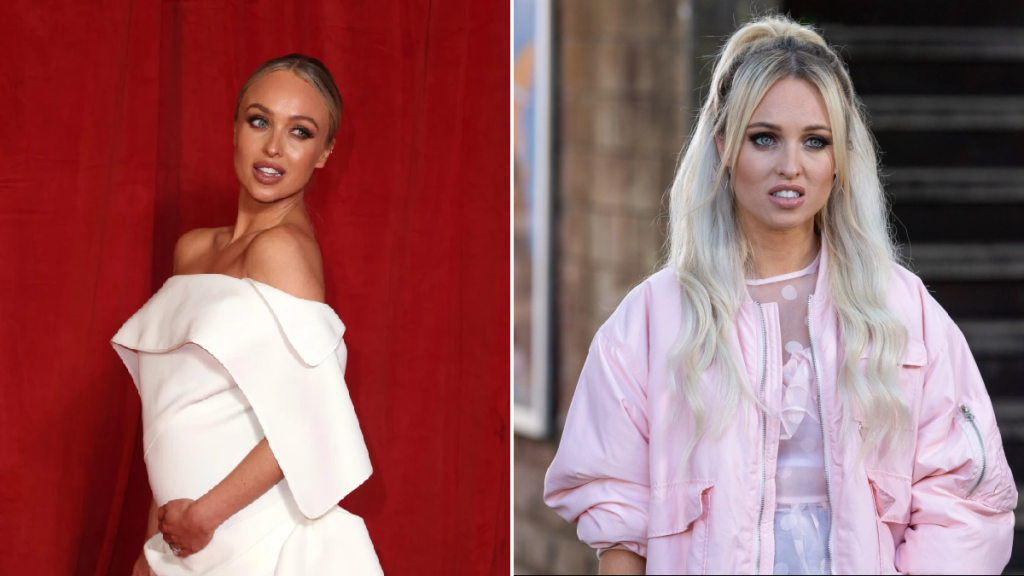 Jorgie announced her pregnancy back in June (Pictures: WireImage/Lime)

Hollyoaks star Jorgie Porter is getting excited as she gets ready to give birth to the baby she’s expecting with her fiancé Ollie Piotrowski.

The star, who plays Theresa McQueen in the soap, has been keeping fans updated as she prepares for the big event.

Recently she posted a picture of herself with her hospital bag all packed, crammed full of essentials for herself and the new arrival, including an adorable cuddly toy.

Last week she posted a video of herself having a facial as she needed some pampering after starting her maternity leave. ‘Does anyone else do anything else when starting mat leave? Feel like I’m getting bored already 🤣’ she shared. ‘Suggestions welcome.’ This prompted the amusing reply, ‘Take yourself to the toilet in peace 😂 you’ll never get it again 😂.’

The baby will be Jorgie and Ollie’s first child, after she heartbreakingly lost the quadruplets she was expecting at 14 weeks. ‘It was quite shocking because I thought it was going to be four [babies] – I was ready for a girl gang,’ she told the Loose Women panel in March this year.

‘It was a missed miscarriage so my body was still being pregnant and still doing the symptoms of pregnancy.’

So it was a joyful moment when Jorgie realised she was pregnant again and her Hollyoaks family were thrilled on her behalf, posting on their official Instagram, ‘Huge news! We have a little, tiny new McQueen on the way! Our beautiful Jorgie Porter is pregnant! Congratulations all round, this is the best news ever.’

Dan Osborne surprised wife Jac Jossa with a week in the Maldives for her birthday (Picture: Rex/Shutterstock) Jacqueline Jossa has heaped praise on husband Dan Osbourne for surprising her with a holiday for her birthday. The EastEnders star recently turned 30, and celebrated with a big bash at she and husband Osborne’s Essex mansion, with […]

Beckham was never going to back down (Picture: Twitter / Joe Lycett) I hoped he was kidding.  As Joe Lycett slowly paced towards the shredder, holding £10,000, I wanted the comedian to turn to the camera and say, ‘Obviously I’m not going to destroy an obscene amount of money during this cost-of-living crisis’.  But he […]

Cassian was put to work in prison – now we appear to know why (Picture: Lucasfilm Ltd.) Warning: spoilers ahead for the Andor episode 12 finale. It’s safe to say the Andor season finale has left us an absolute wreck, with episode 12 signalling the moment Cassian Andor (Diego Luna) appeared to officially join the […]