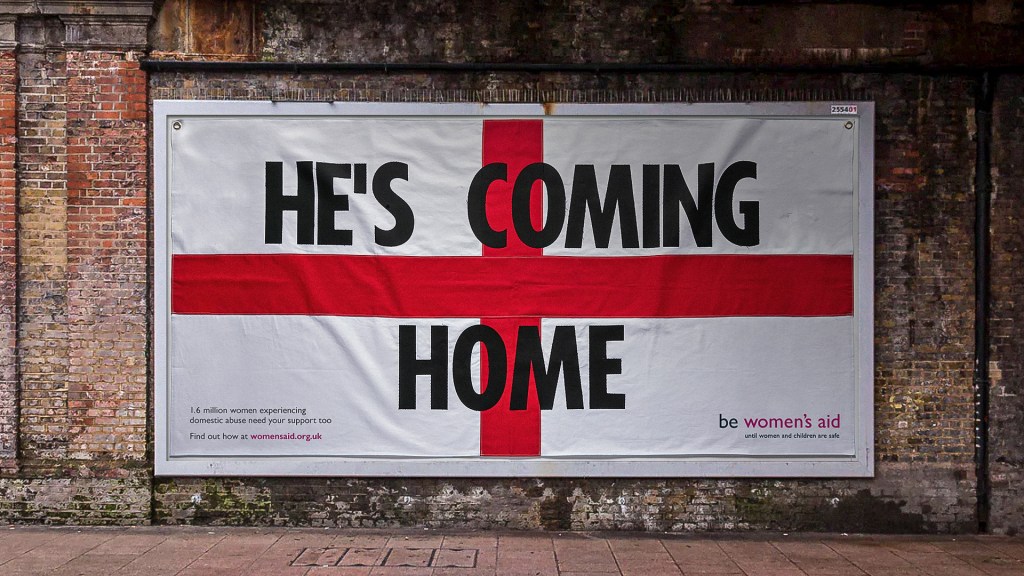 The campaign sets out to reassure women that they’re not alone, with increased awareness (Picture: Women’s Aid)

While most of us are hoping football is coming home, there are many women fearing that their partners will do the same.

Taking place in winter for the first time, the cold weather and dark evenings mean that more fans than usual will stay home to watch the World Cup.

For many women, this is a time of fear, where existing domestic violence incidents have been known to rise by as much as 38%.

The same study found that, even when the England national team played and won or drew, domestic violence incidents still increased by 26% compared with days there was no football match.

Therefore Women’s Aid has partnered with artist Corbin Shaw to raise awareness for the cause, by creating a series of St George’s Cross flags, which feature alternative footballing slogans such as ‘He’s Coming Home’.

Backed by Women’s Aid patrons – including Spice Girl Melanie B and Dame Julie Walters – the launch coincides with International Day for the Elimination of Violence Against Women.

The campaign sets out to reassure women that they’re not alone, with increased awareness ultimately helping the charity to save lives.

The campaign is backed by the likes of Spice Girl Melanie B and Dame Julie Walters (Picture: Women’s Aid)

There’s also a carry-over effect, with domestic violence still at an 11% increase the day following an England match.

It’s clear that while football doesn’t cause abuse, it can trigger an increase in existing abuse.

There are still skeletons in Rocky’s closet that Brian is intrigued by (Picture: BBC) Rocky Cotton may be a walking cockney banter machine, with a twinkle in his eye, cheeky quips and outrageous stories, but EastEnders star Brian Conley has warned there may still be a dark side to the comic character. We have known […]