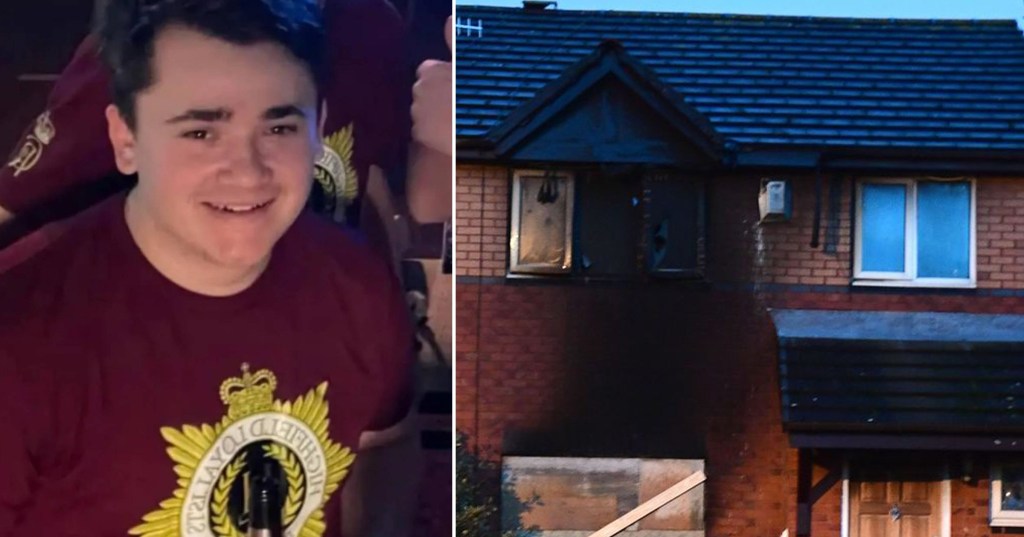 A ‘hero’ son has died after trying to save his dad from a fire caused by an e-bike left charging overnight.

Gary Shearer, 23, has been named locally as the son of Rab Shearer, 60, who died in a fire in Litherland, near Liverpool, earlier this month.

Merseyside firefighters rushed to the address on Daisy Mews where two people were trapped inside the house.

One person found inside died at the scene and was named locally as Rab Shearer.

His son, Gary, was said to have been in a ‘critical’ condition for two weeks before dying this Sunday.

Tributes were paid on social media to the ‘hero’ who ‘gave his life’ trying to save his dad.

His uncle, William, said he was ‘utterly heartbroken’ after the loss of his nephew and brother.

Gary has been named locally as the son of Rab Shearer who died in a house fire in Litherland (Picture: Liverpool Echo)

The devastated house where the blaze happened on January 8 (Picture: Liverpool Echo)

‘Gary, you fought the fight of your life kid, but it sadly got the better of you,’ he wrote on Facebook.

‘You gained your angel wings, wear them with pride you are and always will be our hero. Sleep tight, Gary.’

His cousin, Steven Wardle, described Gary as ‘a hugely loved member of the family’.

He wrote: ‘I still find it hard to say it, but rest in peace Gary. As far as cousins go, he was the best you could ask for.

The victim has been described as a ‘hero’ by family and friends (Picture: Liverpool Echo)

‘From helping you move house to keeping the kids entertained, he was a hugely loved member of the family and will be sadly missed.

‘And what he did for his dad “Uncle Rab” that night was nothing short of heroic.’

A GoFundMe, originally set up for the family, confirmed the news of Gary’s death.

The Beaky Social Club in Bootle posted: ‘Shirley, Margy and the bar staff send our sincere condolences to Ray Shearer, Andrew Shearer and all the Shearer family, on the loss of their beloved brother Gary Shearer.

‘No words can ease the pain you feel today, but please know we are here if you need anything.

‘RIP Gary, you gave your life to try to save your beloved dad, what a hero you are.

A spokesperson for the fire service said at the time a further person managed to escape the property and raise the alarm.

They were woken by smoke alarms before being taken to hospital suffering from severe smoke inhalation.

To view this video please enable JavaScript, and consider upgrading to a web browser that supports HTML5 video A former Kremlin official has admitted Russia now only has half of its elite airborne troops since invading Ukraine. Putin’s elite paratrooper squad, known as the VDV, had already been decimated before his mobilisation of 2,000,000 troops […]

To view this video please enable JavaScript, and consider upgrading to a web browser that supports HTML5 video Matthew Wright has shared how ‘sickened and disgusted’ he is over Ghislaine Maxwell’s TalkTV interview with Jeremy Kyle. The disgraced socialite gave her first interview behind bars from prison in California, where she spoke about her relationship […]