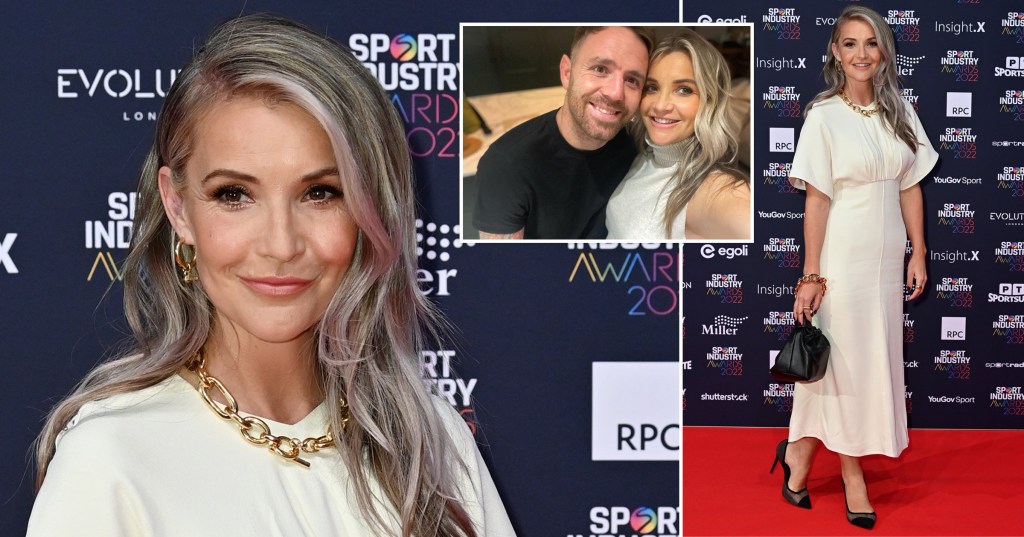 Helen hit the town for the first time in weeks (Picture: Rex/@helenskelton)

Helen Skelton enjoyed a well-deserved night out this evening following the devastating news of her marriage breakdown.

The Countryfile singer got glammed up to attend the Sports Industry Awards at Evolution in London on Thursday, marking her first red carpet appearance since announcing she and estranged husband Richie Myler had split.

Helen, 38, looked relaxed and flashed a big smile for the photos as she posed in her elegant floaty cream dress teamed with chunky jewellery and black heels.

She looked noticeably different with her blonde hair now traded for an ashier colour and highlights of pastel pink and purple.

However, Helen wasn’t alone on the red carpet as she was later joined by Sky Sports presenter Bela Shah, who posed for snaps donning a striking strapless pink gown.

Once inside the bash, she bumped into BBC Breakfast presenter Dan Walker who looked dashing in a blue velvet tuxedo jacket.

It is the first major public event Helen has attended since sharing the shocking news that she is no longer with rugby star Richie, 31.

‘Very sad to say that Richie and I are no longer a couple. He has left the family home. We will be doing our best to co parent our small children,’ she wrote in her Instagram stories on April 26.

The presenter later ditched her wedding ring in a sponsored advert she posted to her social media.

Helen had company on the red carpet with Bela Shah joining her for photos (Picture: Rex Features)

Helen and Richie were married for eight years and share three children; Ernie, six, Louis, four, and baby daughter Elsie Kate who was born in December.

Richie has not publicly commented on the split but is reported to have started a new relationship with the daughter of the president of his rugby club Leeds Rhinos.

Sources say he and Stephanie Thirkill struck up a romance following his marriage breakdown, previously telling The Sun: ‘Richie appears to have been spending a lot of his free time with this younger, successful businesswoman.’

The rumoured new couple were spotted going for a countryside walk earlier this week, marking the first time they have been pictured together since news of his split from Helen broke.

If you’ve got a celebrity story, video or pictures get in touch with the Metro.co.uk entertainment team by emailing us celebtips@metro.co.uk, calling 020 3615 …read more

To view this video please enable JavaScript, and consider upgrading to a web browser that supports HTML5 video It was always going to be an emotional last day for Dan Walker as he leaves BBC Breakfast, and a surprise reunion with his former co-host Louise Minchin almost brought the tears. On Tuesday May 17, Dan, […]

Who is Joe Wicks’ wife and how many children do they have?

Joe Wicks’ emotional documentary airs tonight on BBC One (Picture: Comic Relief/BBC Children in Need/Comic Relief via Getty) Joe Wicks, also known as The Body Coach, became a household name after live-streaming daily workouts to keep the nation moving during the first Covid-19 lockdown. His services to fitness and the £580,000 he raised for the […]

Rock has hosted the Oscars in the past (Picture: Neilson Barnard/Getty Images) The 2022 Oscars was eventful to say the least, with the biggest talking point being the moment best actor winner Will Smith ascended the stage and slapped Chris Rock across the face. It sounds like Rock could have an even bigger part to […]