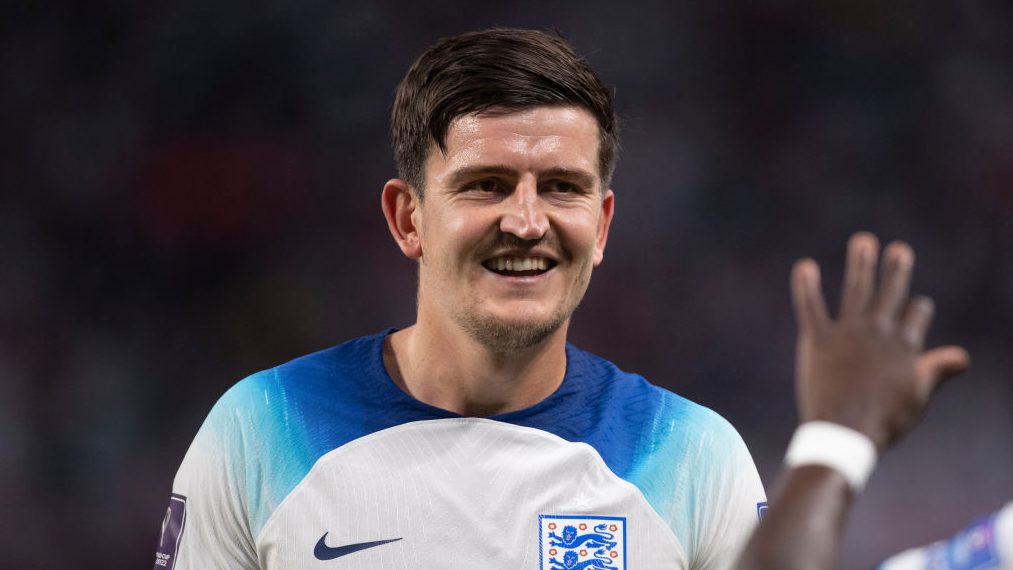 Harry Maguire said he’ll ‘fight’ to get back into the Man United team (Picture: Visionhaus/Getty Images)

Harry Maguire has revealed his belief in himself never wavered despite being left out in the cold at Manchester United this season, which raised fears over his World Cup place.

The centre-back will earn his 50th cap for his country when England take on the USA at Al Bayt Stadium tonight amid a troubled campaign which saw him dropped by United manager Erik ten Hag.

Maguire has played just one Premier League match since September but Three Lions boss Gareth Southgate has remained loyal when selecting his England squad, with the defender one of the mainstays of his reign.

He started Monday’s opening game in Group B against Iran, and has recovered from the illness that forced him off late on in the 6-2 victory, underlining the faith shown in him by Southgate.

Maguire said: ‘Being picked for your country is a huge privilege, World Cups especially. Obviously you have fear of being in the squad (or not) but I had a great belief after what I’ve done, that in the 49 caps I’ve had for England I’ve earned the trust to be in it and be available for the team and for selection.’

At 29, Maguire admits he wants to be playing more football having fallen down the pecking order at United but claimed he did not arrive in Qatar undercooked.

Maguire sustained an injury during the game with Iran (Picture: Justin Setterfield/Getty Images)

‘No, I have great belief in myself, I go out on the training pitch and work as hard as possible, I give it my best and try to perform to my best level,’ Maguire added.

‘I wasn’t too worried about the lack of game time. I want to be playing every week and it’s something I’m going to fight (for), to get back into the (United) team.

‘It’s not where I wanted to be but I’ve worked to make sure I’m ready whenever there’s an opportunity to play. I’ve worked hard and always out on an extra shift in training.’

Despite the backdrop being one of an underwhelming season for his club, the former Leicester defender will reach the milestone of his half-century of caps tonight after two tournament near-misses in recent times.

‘It will be a really proud moment for myself and my family. I have some unbelievable memories,’ he said.

‘Reaching the World Cup semi-finals, the European final, I’ve had some great memories in my five, six-year career with England and a lot of the staff are still here, as are some of the players from when I made my debut.

‘We want to go one step further than we did in the Euros.’

John Stones may only have played half of …read more

To view this video please enable JavaScript, and consider upgrading to a web browser that supports HTML5 video This Morning has found a suitably unique way to make World Cup predictions, and this time it was Alfie the Aplaca’s turn. The furry fortune teller appeared on the ITV daytime show just hours before England and […]

Who has left Strictly 2022? Full list of eliminated contestants so far

Which famous faces have foxtrotted away? (Picture: PA) Strictly Come Dancing is plenty of fun… but sadly, someone has to go home each week. Yep, 2022’s live shows are well underway, and as a result we’ve already waved goodbye to a few celebrity contestants, as the show hurtles towards its end-of-year finale. On Saturday night, […]

Police are seen on horseback outside the stadium prior to the FIFA World Cup Qatar 2022 Group C match between Argentina and Saudi Arabia (Picture: Getty Images Europe) Fifa has asked police in Qatar to not treat women as criminals if they report rape or sexual assault during the World Cup, according to a new […]