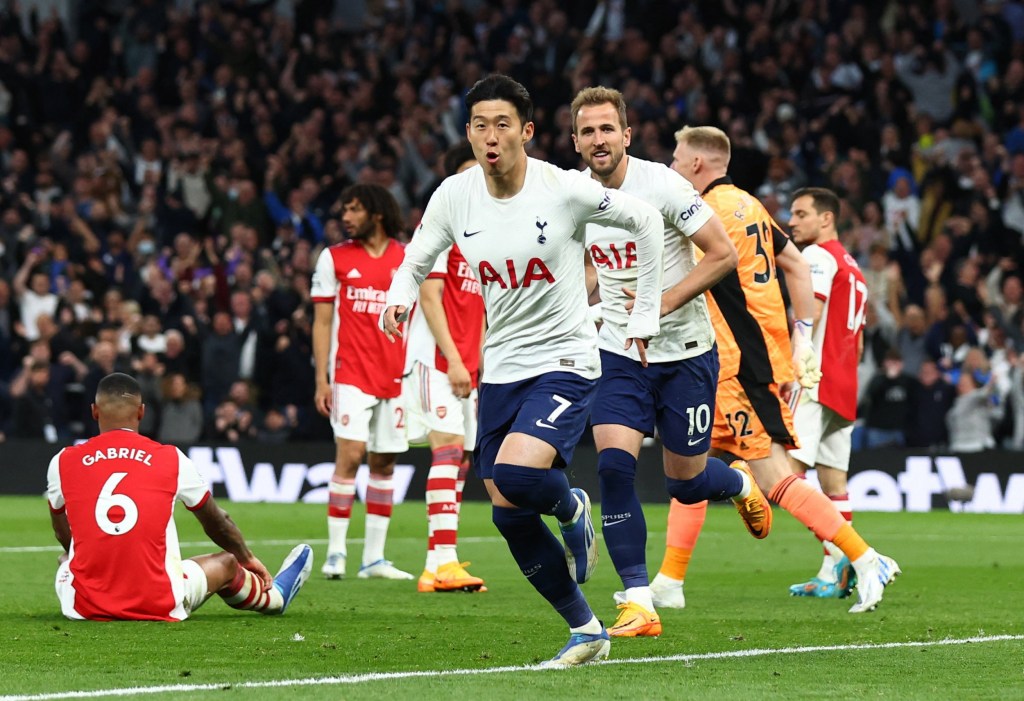 Harry Kane has vowed to help Son Heung-min beat Mohamed Salah to win the Premier League’s Golden Boot but has reminded his Tottenham teammate that securing a top-four finish needs to take priority.

Kane struck twice while Son also found the net in Spurs’ 3-0 victory over Arsenal in the north London derby on Thursday evening.

Son’s goal was his 21st in the Premier League this season, meaning he is just one behind Salah who leads the way in the division.

The South Korea international only has two games left against Burnley and Norwich City in which he can score to overtake Salah, while Spurs need Arsenal to drop points in their final two matches against Newcastle United and Everton to stand any chance of finishing fourth.

And Kane has stressed that Spurs’ top-four ambition will take priority over Son’s race with Salah.

‘We’ll have to wait to see what happens,’ Kane told Stadium Astro when asked if he would allow Son to take a penalty against Norwich on the final day of the season if Spurs were comfortably winning the game.

‘Sonny has been fantastic for us, another goal tonight, we’ve got another important game on Sunday that I’m sure he’ll be ready for.

‘Hopefully we can win him the Golden Boot, that’ll be nice but of course, he knows and we know that the three points are the most important thing.’

Asked about his understanding with Son on the pitch, Kane replied: ‘We work on it of course, we train every day together, but I think it just happens over time.

‘We’ve built up a good understanding, I think over the last two or three seasons especially.

‘When I drop in deep he knows to run in behind and I’ll look for him. We just connect really well, his finishing is fantastic, both right and left foot, one-on-one he’s brilliant. For me, he’s a joy to play with.’

DIY can be a real money saver (Picture: Karen McCarthy) One couple took their conservatory renovation into their own hands by opting for a DIY approach – and saved cash as a result. Together they managed to save £580, as a professional would have quoted them £880 for the job that they did for just […]

Khan vs Taylor ‘would have made sense’ for the Scot (Picture: Getty) Amir Khan considered a fight against former undisputed super-lightweight champion Josh Taylor before deciding to retire from boxing. The Olympic silver medal winner and former unified world champion announced he was hanging up his gloves at 35 this month, bringing the curtains down […]

From lightning fast changes to hidden cues to the crowd: Here’s what you don’t see watching Eurovision at home

Here’s what you don’t see at Eurovision (Picture: Emma Kelly/METRO/Getty) Tonight, around 180 million people worldwide will tune in to watch 25 acts battle it out to be crowned Eurovision Song Contest champion in a spectacular show unlike anything else in the TV calendar.  Following the two semi-finals earlier in the week, the PalaOlimpico in […]