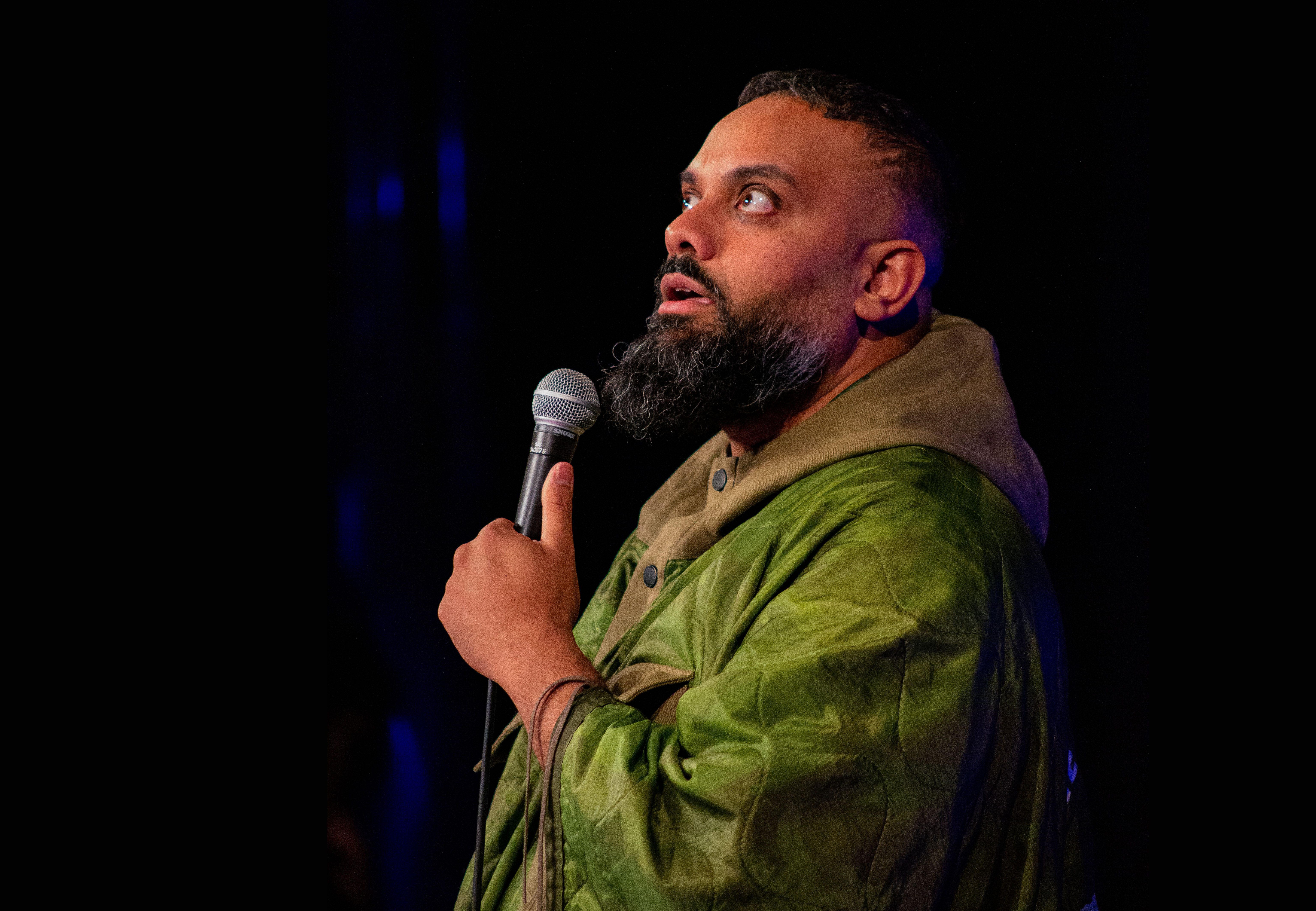 Guz Khan has something to say. ‘I have to give Joe Lycett a massive shout out,’ he declares forcefully.

Eight years ago, Coventry teacher Guz had been uploading videos online for a spell, much to the amusement of mostly friends and family. But his Pakisaurus sketch – hilariously slamming 2015’s Jurassic World – had unexpectedly gone viral.

Joe, based in nearby Birmingham, had spotted the skit and messaged him.

And so began Guz’s stellar stand-up career, as Joe – unaware Guz had never set foot inside a comedy club before – convinced the ‘comic’ to open for him at The Glee Club, the region’s premier comedy venue.

Despite his lack of experience, Guz’s obvious charm and down-to-earth patter wowed the audience.

‘I didn’t really have material and just did crowd work,’ Guz laughs. ‘But I came off stage and [Joe] said to me: “You are going places, you prick!”

Joe Lycett convinced Guz to open his show for him (Picture: Getty)

The appearance quickly led to further stand-up bookings, setting Guz on a meteoric career trajectory that now spans countless panel and chat shows (from Celebrity Gogglebox and Blankety Blank, to Taskmaster and The Last Leg), his own Bafta-winning sitcom (Man Like Mobeen), plus Hollywood movie Army Of Thieves, and Judd Apatow’s The Bubble.

Looking back at Joe’s invitation he says: ‘If that had never happened, I don’t know how long it would have taken me to get to a comedy club.’

Despite his love of live performances, where he typically shares the stage with several other acts, an increasingly packed film and TV schedule has meant it’s taken Guz several years to finally get his own full headline UK tour booked.

Guz presenting an award at the 2021 MOBO Awards with Alex Scott (Picture: Getty)

‘It’s weird, I love stand-up, I think it’s the purest form of art and communication I get to do, but I rarely get the chance to do it. I was talking to Romesh [Ranganathan] about this and he said that the thing he loves most in the world is stand-up comedy: it’s him and his audience. But between all the other things we have to do… by the time you get all that stuff done, it leaves such a little window for stand-up that you just wish there was more.’

Guz’s debut tour sees the writer/comic/actor combine personal recollections and observations about growing up in Coventry with a good slab of rollicking off-the-cuff audience chat.

‘It’s weird bro,’ I think that stand-up is an art form, and really the more I’ve investigated different types of stand-up and different …read more

Antony will miss the game against Leeds (Photo by Catherine Ivill/Getty Images) Manchester United will be without Brazilian winger Antony for the visit of Leeds United to Old Trafford on Wednesday, Erik ten Hag has confirmed. The Red Devils are already without long-term absentees Donny van de Beek and Christian Eriksen, as well as injured […]

Amanda Holden was flooded with compliments over her Valentine’s Day shoot (Picture: Getty Images) Amanda Holden has got her celebrity friends in a right tizz over her new lingerie pictures. The Britain’s Got Talent judge certainly doesn’t look 51 in her recent photoshoot, in which the star posed in a black lace number in front […]