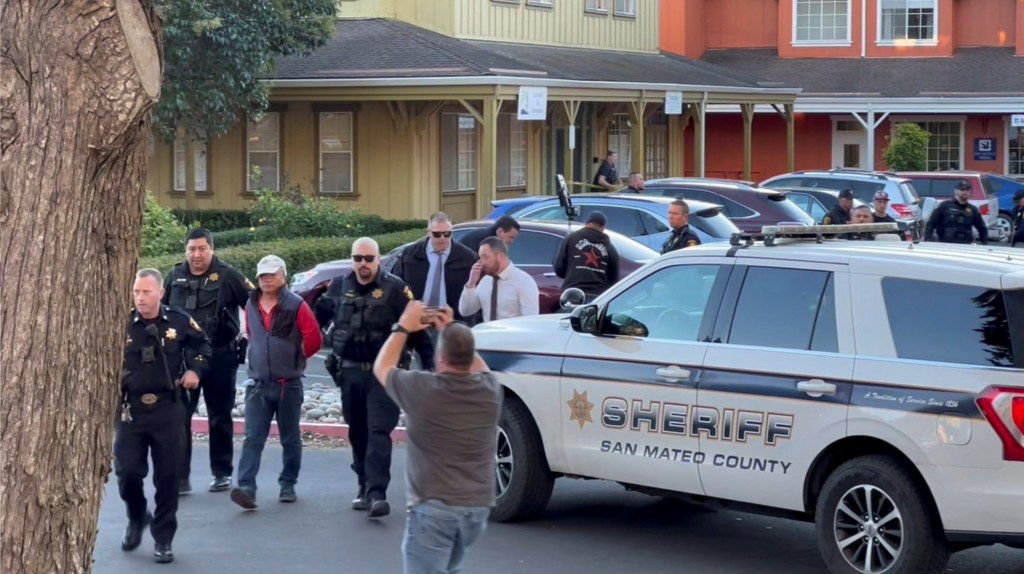 Police have arrested the suspect who is said to be ‘operating’ with them (Picture: Kati McHugh via REUTERS)

A gunman shot dead seven people in front of schoolchildren in California – just two days after 11 people were killed in an attack a few miles away.

Police were called after local resident, Zhao Chunli, 67, gunned down farmworkers near a nursery in Half Moon Bay, California.

It comes just two days after 11 people were shot and killed in the majority-Asian area of Monterey Park, California, during celebrations for the Lunar New Year.

The suspect last night was filmed by news cameras turning himself into the San Mateo County Sheriff’s Office about two hours after the attack.

The first four victims were discovered at a mushroom farm around 2.22 pm local time (00.22GMT), while the other three were later found at a nearby trucking business.

Investigators have not yet provided a motive for this attack.

San Mateo County Sheriff Christina Corpus said at a news conference that the suspect was arrested after driving himself to a local police station just before 5pm local time.

Police at the scene of the mass shooting in California (Picture: AP)

Seven people were killed by the shooter (Picture: AP)

Officers were called after reports of gunfire at a farm in Half Moon Bay (Picture: AP)

He was found with a semi-automatic pistol that may have been used in the attack, and is currently ‘co-operating’ with police, she added.

Mrs Corpus added that an eighth victim is being treated in hospital and is in critical condition.

She said: ‘This kind of shooting is horrific…It’s a tragedy we hear about far too often, but today it’s hit home here in San Mateo County.’

In a news conference, the sheriff also confirmed that witnesses included children who had recently been let out of school and lived on the rural property.

‘For children to witness this is unspeakable,’ she said.

California Governor Gavin Newsom tweeted that he was ‘at the hospital meeting with victims of a mass shooting when I get pulled away to be briefed about another shooting.

‘This time in Half Moon Bay. Tragedy upon tragedy.’

San Mateo County Board of Supervisors President Dave Pine told the Associated Press news agency that the attacks were committed by a ‘disgruntled worker’.

‘We are sickened by today’s tragedy in Half Moon Bay,’ Mr Pine said in a statement.

‘The scourge of gun violence has sadly hit home. We have not even had time to grieve for those lost in the terrible shooting in Monterey Park. Gun violence must stop.’.

Zelda: Twilight Princess – is it really that bad? (pic: Nintendo) The Monday letters page continues its speculation on Nintendo’s software and hardware plans, as one reader reviews God Of War Ragnarök. To join in with the discussions yourself email gamecentral@metro.co.uk Short listAs we all await the release of Tears Of The Kingdom I’ve seen […]

Detectives searching for missing mum Nicola Bulley have tracked down a ‘potentially key witness’. The mother-of-two, 45, went missing last Friday morning – with her mobile phone found on a bench near to where she was last seen on a towpath by the River Wyre in St Michael’s on Wyre, Lancashire. Immediately before going missing, […]