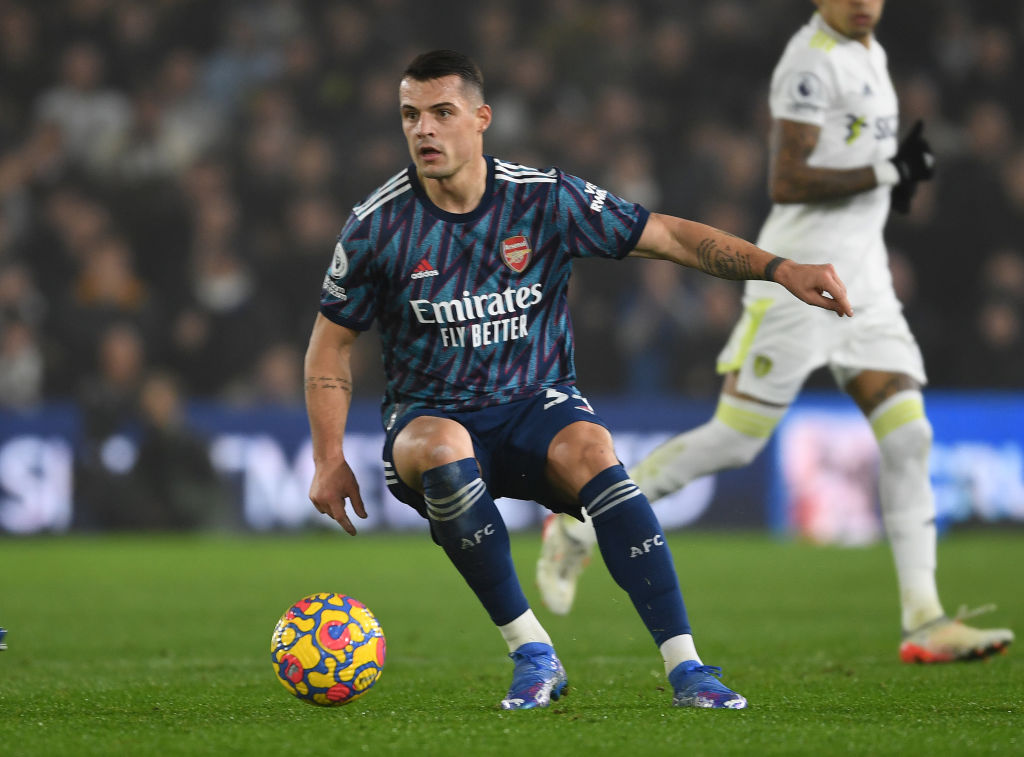 Granit Xhaka’s bizarre booking against Leeds United last December is the subject of an investigation by the National Crime Agency.

The Football Association confirmed in January they were investigating the incident amid suspicious betting patterns.

Xhaka was booked for time-wasting during what was, ultimately a straightforward 4-1 win for Arsenal at Elland Road against a severely understrength Leeds side, ravaged by injuries and suspension.

A bet on Granit Xhaka getting booked against Leeds United is said to have earned one punter £250,000 (Picture: Getty)

With Arsenal cantering to three points, Xhaka was cautioned during the closing stages after he delayed taking a free-kick.

The matter has now been referred to  to the country’s leading organised crime agency, although there is no suggestion, according to the Daily Mail, that Xhaka or any of his Arsenal temmates are guilty of any wrongdoing.

Suspicions were raised by a wager of nearly £52,000 placed during the match on Xhaka to be booked in the final 10 minutes.

The gamble is said to have landed on punter and astonishing payout of around £250,000.

The gambling industry has evolved to the extent whereby punters are able to bet on a variety of eventualities and possibilities within a match, on top of the traditional result-based markets.

Those markets mean relatively innocuous events, which would likely have very little bearing on the overall outcome of a game, have the capacity to earn gamblers thousands of pounds.

‘Spot betting’, as it is known, has been an issue in cricket for over a decade, with the case of Pakistan fast bowler Mohammad Amir, who was given a lengthy ban along with two other teammates following a Test at Lord’s back in 2010, the most high-profile case England has seen to date.

Football, however, particularly at Premier League level hasn’t been targeted for spot fixing, until now, largely on account of the vast sums of money professional players earn.

Bradley Wood, however, was banned for six years in 2018 after intentionally picking up yellow cards in Lincoln City’s cup run.

Will this end badly? (Pictures: BBC) Nancy Carter (Maddy Hill) has a decision to make in EastEnders. Will she officially end her relationship with Zack Hudson (James Farrar) – or believe he will change, take him back and get married? Last night, Zack’s one-night stand with Sam (Kim Medcalf) was revealed in quite a spectacular […]

It’s back and forth for EastEnders schedules, just like a tennis rally (Pictures: BBC) Schedules are set to change for EastEnders as BBC One hosts Wimbledon coverage. From Monday, June 27, EastEnders will move to BBC Two as the tennis tournament gets underway. While the channel may be different, EastEnders episodes will still air from […]