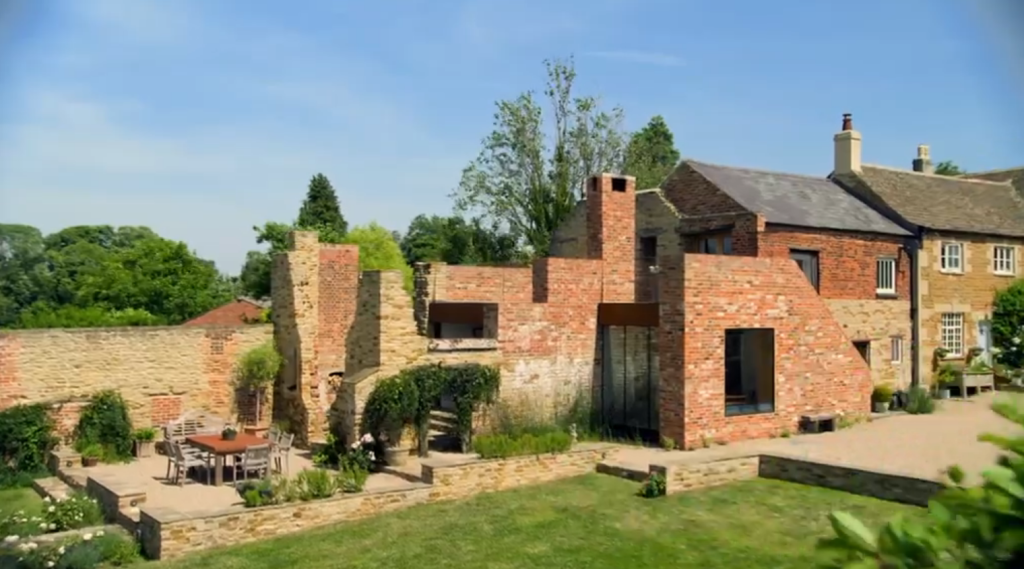 The grade-two listed property was sensitively redesigned to incorporate the ruins (Picture: Channel 4)

Grand Designs viewers were unimpressed with the Royal Institute of British Architects’ choices for the House of the Year shortlist on Wednesday night after ‘clear winner’ the Parchment House didn’t make the cut.

In a series of special episodes visiting houses that have been shortlisted for the prestigious RIBA award – and thus devoid of the usual stress, panic and financial woes – presenter Kevin McCloud and co got to look solely at some of the most impressive ‘afters’ of this year.

The night’s category focused on renovations and buildings that had been updated and transformed to bring them to the height of sophistication.

There was the Dutch Barn sitting in its eight-acre public garden, the Cow Shed magically transformed into a glorious library and the Victorian two flats pushed together by way of a ‘futuristic zinc cube’.

However, it was the Parchment House that stole people’s hearts as owner Charlie and Jane proudly showed off their unique grade two-listed home in a print works, that had been sensitively extended through into the ruins of two separate buildings.

The clever ‘building with a building’ design by their architect son Will made use of glass walls and the remaining ruins to shape the extension of the house, taking in brick walls that had previously been ‘garrotted with ivy’.

This would have been the one we would add to the #HouseOfTheYear shortlist.

Beautifully marries the past and the future. ð¥° #GrandDesigns https://t.co/SVLqHFFO6o

So clever. So very, very pleasing on the eye. So homely. So right.

If I lived in that house, I would probably want to be outside all the time so I could admire it.

The building ruins were previously ‘garrotted’ by ivy (Picture: Channel 4)

The owners’ son, an architect, took great pains to preserve as much as possible (Picture: Channel 4)

Will’s attention to detail and preservation was admirable as he encouraged is parents to keep rusty nails in place in the walls, as well as lime paint splashed across another.

The renovation works had been overseen by an archaeologist on the off-chance they unearthed something of value – which they did, in the shape of an ancient stone bath.

The judges praised the Parchment House’s use of old and new materials and how they ‘had been introduced to each other and encouraged to be friends’.

The judges praised how old and new materials worked together (Picture: Channel 4)

That same blend could be seen inside too (Picture: Channel 4)

Many viewers very very taken by the house (Picture: Channel 4)

Stunning views were part of the package, but it wasn’t to be (Picture: Channel 4)

‘Parchment House is the one, that’s the winner, …read more

Could there be a season 12 of The Walking Dead? Future of the franchise

It’s all comes down to this Sunday’s episode – but could The Walking Dead carry on? (Picture: AMC/Metro.co.uk) *Warning: Spoilers for The Walking Dead, season 11, episode 24*. Season 11 of The Walking Dead will be its last, and we’re now so close to the season finale we can almost taste it. Fans of the […]

Jamal Musiala looking to drive Germany into the last 16 (Picture: Getty) Germany take on Costa Rica in their final group match knowing anything less than a victory will see them crash out at the first hurdle. All four teams in Group E can still qualify tonight with Spain taking on Japan at the same […]