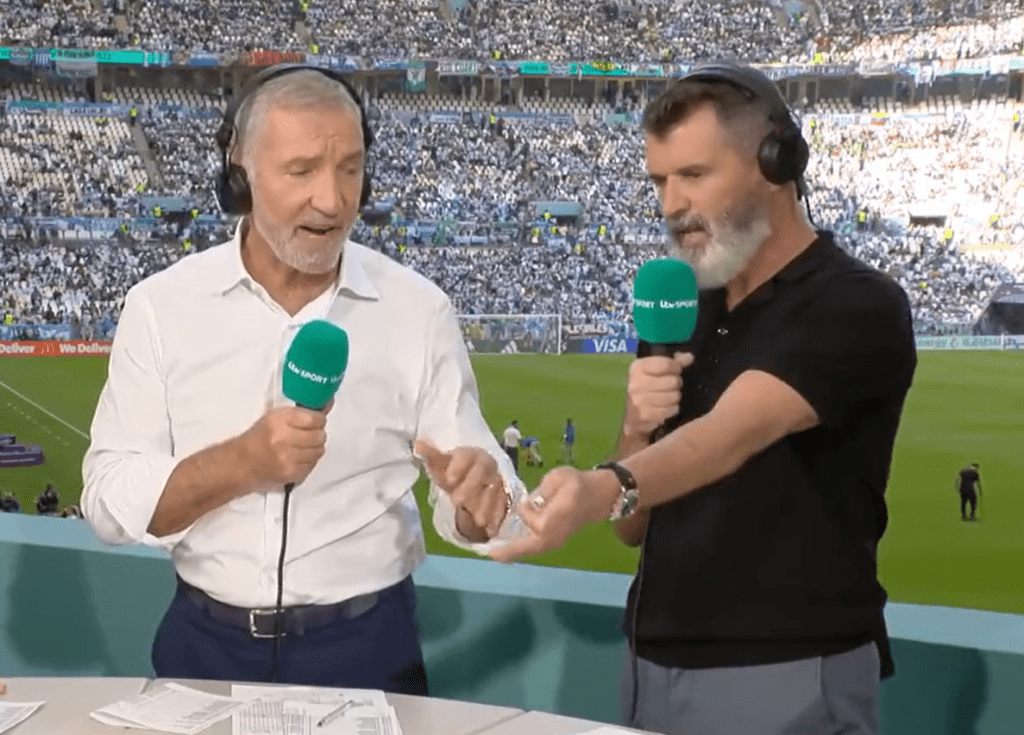 The two pundits had a very tense exchange as they bickered on air (Picture: ITV Sport)

Graeme Souness and Roy Keane were involved in a heated row during half-time of Argentina’s World Cup clash with Saudi Arabia as they argued over a penalty kick.

The Copa America holders went into the half-time break with a one-goal lead after Leandro Paredes was adjudged to have been pulled down by Mohamed Kanno inside the box, with Lionel Messi dispatching the resulting spot-kick.

But the penalty appeared to be rather soft, with Paredes – who was nowhere near where the corner kick ended up landing – going down very easily.

Referees in Qatar have been asked to look out for blocking and holding from players who are not looking at the ball, but Souness and Keane clashed over the incident and ended up bickering on air for several minutes in a very tense exchange.

Keane disagreed, responding: ‘No, no, no. All this is going to do is encourage diving. He [Paredes] is dragging the Saudi Arabia defender down, he’s dragging him down!’

Saudi Arabia’s players were livid with the decision (Picture: Getty)

Souness: ‘Roy you’re not listening to what [presenter] Laura [Woods] said. It’s a directive from the referees.’

Keane: ‘I heard exactly what she said, yeah. This will encourage diving.’

Souness: ‘It’s not opinions. It’s facts. The guy wasn’t looking at the ball.’

Keane: ‘Well I’m here to give my opinion. That is not a penalty.’

Souness: ‘Well this is not about our opinions. It’s about the laws of the game.’

Souness v Keane: The gloves are off! ð§¤

Keane: ‘What are we here for? Have I not come here to give my opinion? That’s not a penalty. That’s my opinion.’

Souness: ‘Their interpretation, the new law is if you’re not concentrating-‘

Keane: ‘I’m here to give my opinion, I don’t think that’s a penalty.’

Keane: ‘I’m here to give my opinion! That’s not a penalty …read more

England got off to a fantastic start (Photo by Sebastian Frej/MB Media/Getty Images) Wayne Rooney hailed England after Gareth Southgate’s side opened their World Cup campaign with a fantastic 6-2 win against Iran. A brace from Bukayo Saka and goals from Marcus Rashford, Jack Grealish, Jude Bellingham and Raheem Sterling gave the Three Lions an […]

It’s going to be explosive! (Picture: ITV) Emmerdale fans are waiting with bated breath for Charity Dingle (Emma Atkins) to discover that Mack Boyd (Lawrence Robb) cheated on her with Chloe Harris on a one night stand. And Jessie Elland, who plays the pregnant youngster, is as excited as viewers for the inevitable showdown. ‘I’m […]

The complex of tunnels represents a dark chapter in Britain’s war history (Picture: Bell & Co/SWNS) A bunker built on British soil by Nazi soldiers has gone on the market. The historic site housed 24 Third Reich fighters after they invaded Geurnsey in the Channel Islands. After sweeping through France, German forces took control of […]