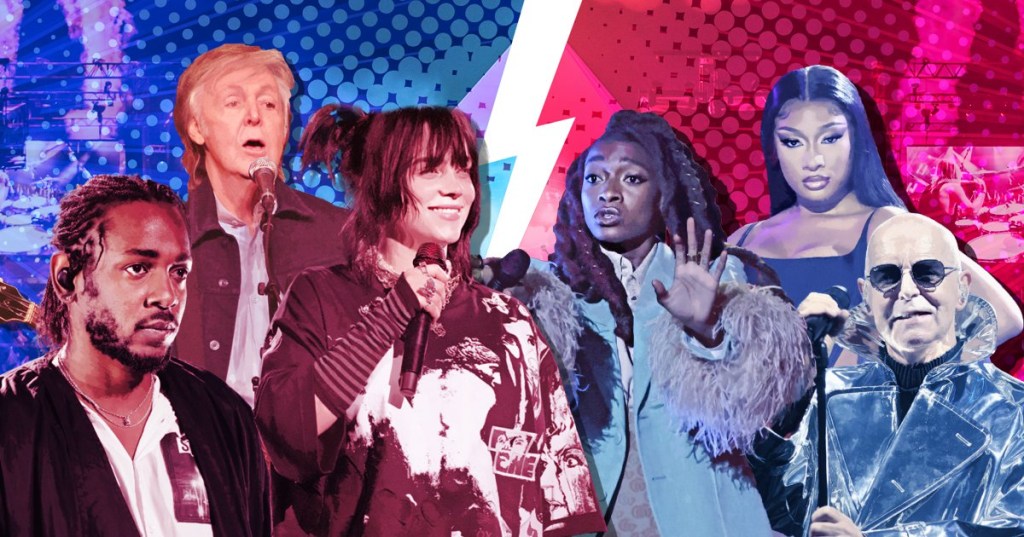 There are plenty of clashes at this year’s Glastonbury Festival – so choose wisely! (Picture: Getty/Metro.co.uk)

Glastonbury 2022 is almost upon us, with fans ready to take on the UK’s most iconic festival – but they’re going to have to pick carefully, as it will include some major clashes.

The festival, held from June 22 to 26, features more than 100 stages, with the six biggest having their own field.

Naturally, it means some of our fave artists will be taking to the stage at the same time, so we’ve got some big decisions ahead!

Here are some of the biggest clashes – choose wisely!

Billie Eilish (L) and Little Simz are on a the same time (Picture: Getty)

Billie and Little Simz are both set to take to the stage on Friday night, so fans of both will have quite the decision to make.

UK huns will be gutted to learn that the Sugababes also add to the clashes – they’re performing at 9:35pm until 10:35pm.

While Billie has had a sensational few years, Little Simz’s success has also skyrocketed, with the star winning big at this year’s Brit Awards.

(L to R) Yungblud, Paul McCartney, and Megan Thee Stallion will all take to the stage (Picture: Getty)

Some of us want a hot girl summer AND to belt out Here Comes the Sun – is that too much to ask?!

Fans of Megan Thee Stallion and Paul McCartney will have to make some big decisions as the pair are set to perform at the same time on Saturday – Megan’s on The Other Stage from 10:30pm to 11:30pm, while Paul’s on The Pyramid Stage for a whopper of a set, from 9:30pm to 11:45pm.

At the same time, Yungblud will be on the John Peel Stage from 9pm to 10pm.

Absolute icons Kendrick Lamar, Pet Shop Boys, and Charli XCX are set to take to the stage at the same time on Sunday.

Fans of Olivia Rodrigo and Noel Gallagher’s High Flying Birds are out of luck, as the two stars will also perform at the same time on Saturday.

Welcome to James’ house (Picture: Mercury Press) If you’re one of those people who believe more is more, then we’ve got the home for you. James Kivior, 42, has spent the past 10 years transforming his flat into a maximalist haven. From taxidermy tigers and zebras to an ornate chandelier, his home decor has plenty […]

When are the Premier League fixtures released and when does the season start?

Manchester City will be favourites to win the Premier League title again (Picture: Getty Images) Attention is already turning to the new Premier League season, with the fixtures for the upcoming campaign announced this week. The new season is still over seven weeks away, with the usual summer transfer talk set to dominate the agenda […]

EastEnders spoilers: Lesbian passion and who is shot?

As ever, Walford is a hotbed of drama (Picture: BBC) Life is in serious danger in EastEnders as a dramatic gun siege leaves one character fighting for life. As an attack is launched on Peggy’s, Sharon Watts (Letitia Dean), Sam Mitchell (Kim Medcalf), Kat Slater (Jessie Wallace) and Shirley Carter (Linda Henry) are in the […]