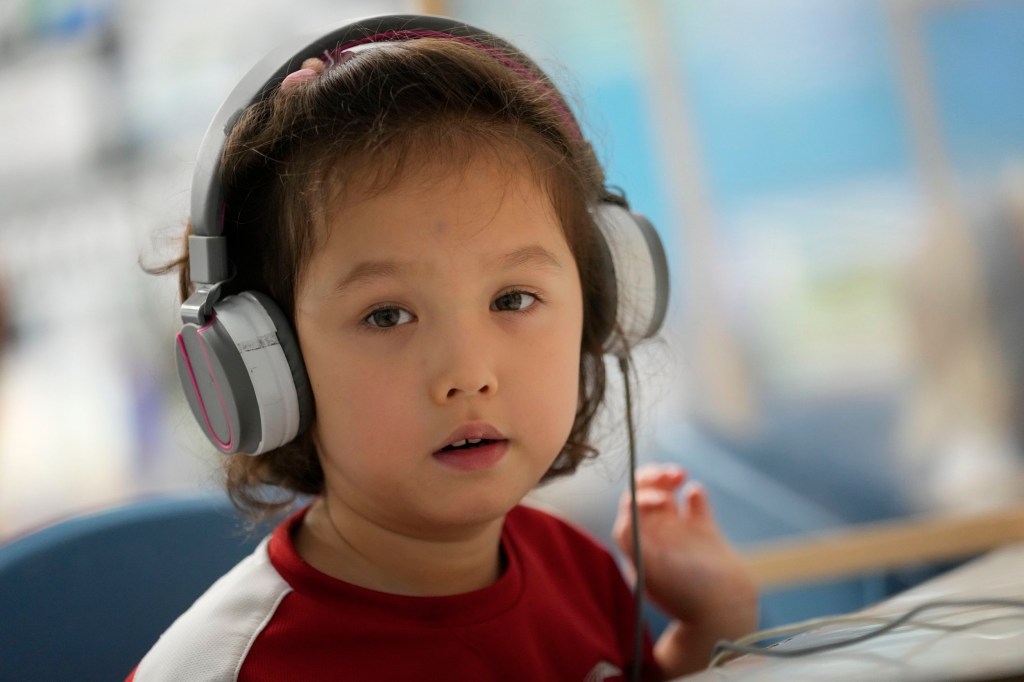 Rylae-Ann Poulin had a rare genetic disorder that kept her from even lifting her head (Picture: AP)

When Rylae-Ann Poulin was a year old, she didn’t crawl or babble like other kids her age.

A rare genetic disorder kept her from even lifting her head. Her parents took turns holding her upright at night just so she could breathe comfortably and sleep.

Now the 4-year-old is walking, running, swimming, reading and riding horses — ‘just doing so many amazing things that doctors once said were impossible,’ said her mother, Judy Wei.

Rylae-Ann, who lives with her family in Bangkok, was among the first to benefit from a new way of delivering gene therapy — attacking diseases inside the brain — that experts believe holds great promise for treating a host of brain disorders.

Her treatment recently became the first brain-delivered gene therapy after its approval in Europe and the United Kingdom for AADC deficiency, a disorder that interferes with the way cells in the nervous system communicate. New Jersey drugmaker PTC Therapeutics plans to seek US approval this year.

This photo provided by Judy Wei shows her daughter, Rylae-Ann Poulin, the first time she was admitted to an ICU, at a Singapore hospital in September 2018 (Picture: AP)

Meanwhile, about 30 US studies testing gene therapy to the brain for various disorders are ongoing, according to the National Institutes of Health. One, led by Dr. Krystof Bankiewicz at Ohio State University, also targets AADC deficiency. Others test treatments for disorders such as Alzheimer’s, Parkinson’s and Huntington’s.

Challenges remain, especially with diseases caused by more than a single gene. But scientists say the evidence supporting this approach is mounting — opening a new frontier in the fight against disorders afflicting our most complex and mysterious organ.

‘There’s a lot of exciting times ahead of us,’ said Bankiewicz, a neurosurgeon.

Rylae-Ann learns to ride a horse in Bangkok (Picture: AP)

The most dramatic of those breakthroughs involve Rylae-Ann’s disease, which is caused by mutations in a gene needed for an enzyme that helps make neurotransmitters like dopamine and serotonin, the body’s chemical messengers. The one-time treatment delivers a working version of the gene.

At around 3 months old, Rylae-Ann began having spells her parents thought were seizures — her eyes would roll back and her muscles would tense. Fluid sometimes got into her lungs after feedings, sending her to the emergency room. Doctors thought she might have epilepsy or cerebral palsy.

Around that time, Wei’s brother sent her a Facebook post about a child in Taiwan with AADC deficiency. The extremely rare disorder afflicts about 135 children worldwide, many in that country. Wei, who was born in Taiwan, and her husband, Richard Poulin III, sought out a doctor there who correctly diagnosed Rylae-Ann. They learned she could qualify for a gene therapy clinical trial in Taiwan.

What a way to celebrate his 20th anniversary as a WWE Superstar (pic: 2K Games) 2K has officially revealed details for WWE 2K23, including new gameplay modes like the long-demanded WarGames. There was already chatter of 2K and Visual Concept’s next WWE video game being revealed at the Royal Rumble this Saturday, and it only […]

John was the first to exit the show (Picture: PA) Former footballer John Fashanu was the first star eliminated from this year’s Dancing on Ice. The ITV series kicked off with a bang last weekend, with fans quickly becoming hooked by the ‘greatest show on ice’. Six more celebrities were hoping to make it through […]

Reese Witherspoon heaps praise on ‘naturally gifted’ Jennifer Coolidge and teases Legally Blonde 3: ‘She deserves every one of those flowers’