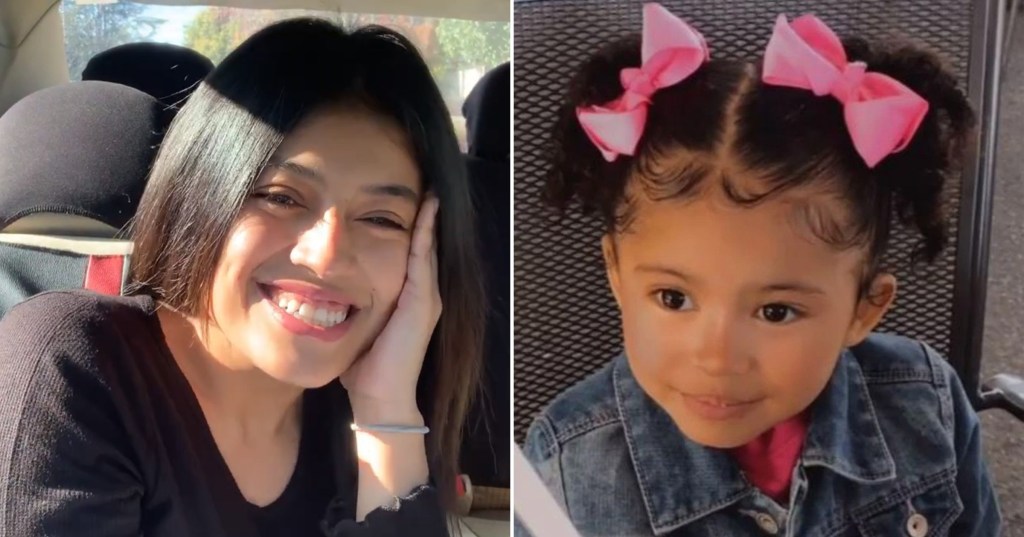 The 25-year-old mother was arrested after the death of her daughter was ruled a homicide (Pictures: Claudia Elisa Santos Hernandez)

A 3-year-old girl whose death in September was ruled a homicide was killed by family members during a 12-hour-long exorcism ritual, officials in San Jose, California said.

The child’s mother, Claudia Hernandez, 25, was charged with assault on a child resulting in death. She is being held behind bars with no bail.

Arely died inside a small church after she was strangled by her mother, uncle and grandfather on September 24, according to prosecutors.

Her family ‘believed the child was possessed by a demon and were at the church prayer for her,’ deputy district attorney Rebekah Wise wrote in court documents, according to KRON-TV.

‘The victim’s grandfather was identified as the leader of the Church and claimed he was a certified pastor,’ Wise wrote. The grandfather has not been charged in her death.

During police interviews in the days following her daughter’s death, Hernandez said she believed the child was possessed because she would periodically wake up in the middle of the night crying or screaming.

On September 24, Arely’s mother and uncle drove her to Iglesia Apostoles y Profetas, a tiny Pentecostal church in San Jose. There, her mother, uncle and grandfather held her down by her neck, torso and legs for several hours. They stuck their hands and fingers down her throat in attempts to make her vomit.

The three-year-old died later that night after 12 hours of torture, according to court documents. Her mother told police that no one performed medical assistance to help her daughter before or after she died.

The family waited two hours before calling 911. Paramedics arrived to find Arely’s body on the floor of the church. A coroner determined she had died by homicide, caused by suffocation and smothering, and her mother was arrested in connection to the case.

The church where the exorcism took place is the same church where kidnappers who abducted a 3-month-old last month met and befriended the child’s grandmother, according to ABC7.

No evidence has linked the church to the child’s abduction, though it was searched following the kidnapping. The baby was found safe several hours after the abduction was captured on surveillance. Police arrested three suspects, including at least one, a woman, who attended the same church and befriended the child’s grandmother.

The song delivers power and emotion like 80s ballads of old (Picture: Lady Gaga) One of the composers of Top Gun: Maverick has opened up on the power of Lady Gaga’s powerful song on the film, recalling when those behind the movie heard it for the first time. The sequel, released 36 years after the […]

Ecotherapy could be a key part of tackling mental ill health (Picture: Getty/Metro.co.uk) Have you ever walked through a forest and instantly felt at peace? Or perhaps you turn your hand to a bit of gardening when you’re feeling stressed? There’s a scientific reason for this – there’s a load of evidence that suggests ecotherapy […]

Where has the time gone? (Picture: John Phillips/John Phillips/Getty) McFly star Tom Fletcher and Giovanna Fletcher are celebrating 10 years of marriage, with Tom paying tribute to his ‘perfect partner.’ The adorable couple first met at the Sylvia Young Theatre School when they were just 13-years-old. Since their surnames were Falcone and Fletcher, they were […]