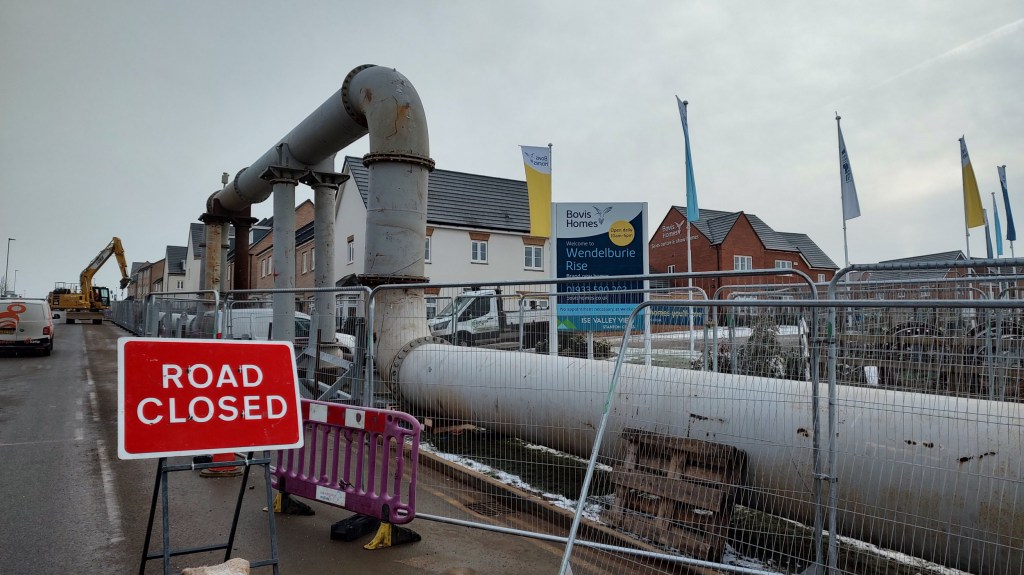 People don’t usually see the pipes that funnel their faeces to the pumping station.

But that’s exactly what residents on a new estate in Northamptonshire are now faced with as soon as they open their front doors.

The giant poo pipe was installed mere metres from the new builds due to a leak in the underground sewage network.

It’s understandably upset some of the locals who’ve just moved into the Wendelburie Rise development in Wellingborough, where homes are on sale from £272,000.

One said: ‘We had a letter just saying “sorry for the works” and given a hamper to say sorry, but that doesn’t change the fact that we’ve got this outside of our house.

‘We have people plowing up the front of our house to try and park to deliver things. It’s not great but I understand it needs to be done.’

Another said: ‘Residents have been complaining for over 12 months about the sewage coming up through their new homes. It’s a disgrace.’

He added: ‘Welcome to Pleasantville!’

They will have to put up with the pipe until at least the end of March as engineers try to locate the source of the leak.

Anglian Water said it did send hampers to some upset residents, but insisted the pipe is only temporary.

The enormous poo pipe snakes all over the housing development (Picture: Anglian Water)

A spokeswoman said: ‘We would like to apologise for the disruption our work is causing residents in the area.

‘We understand both the visual impact and general disruption this is causing and we thank our customers in advance for their patience and understanding.

‘Without the installation of the above ground pipe this could have resulted in a burst on the sewer pipe leading to loss of facilities to our customers and risk of pollution to the environment.’

Pamela Anderson spoke out against the Pam & Tommy series (Picture: WireImage) Pamela Anderson has spoken out over the recent Hulu series focusing on her rollercoaster romance with Tommy Lee, explaining that she approached Lily James in private. The Baywatch icon previously slammed creators of Pam & Tommy for the ‘violation’, revealing that the program […]

Denisha had the finger pointed at her this week (Picture: BBC/Fremantle Media/Ray Burmiston) This week’s episode of The Apprentice saw the remaining candidates take part in one of the series’ most iconic challenges, when the teams were tasked with sourcing a list of items for the least amount of money. Having travelled to Brighton for […]