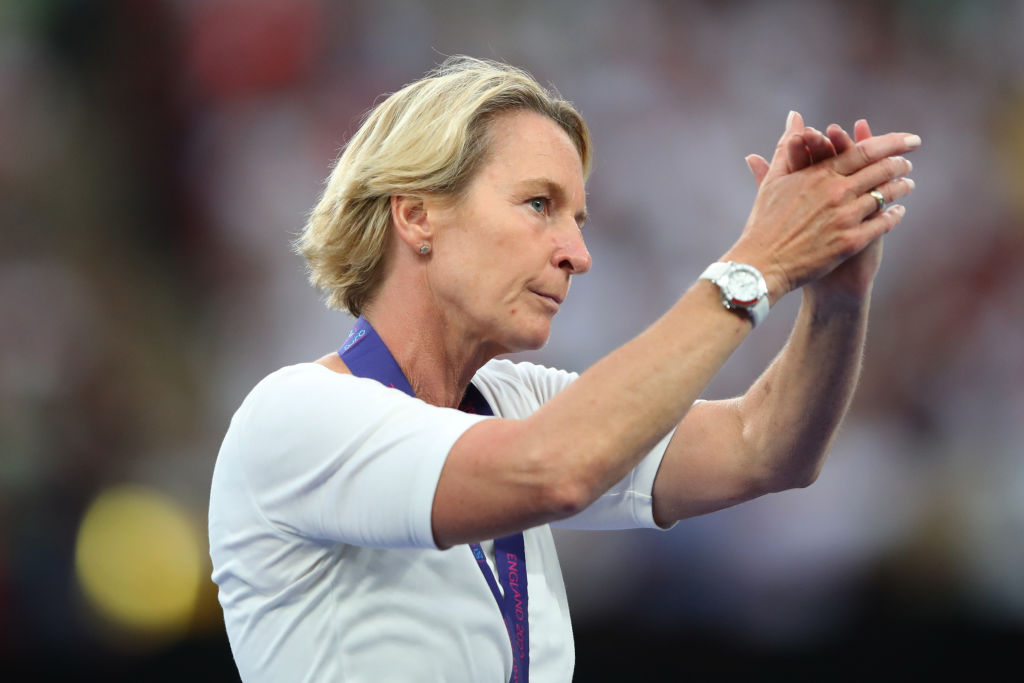 Germany head coach Martina Voss-Tecklenburg was left seething with some of the refereeing at the Euro 2022 final but ultimately conceded that England were ‘deserved champions.’

England won their first major trophy since 1966 after defeating Germany 2-1 at Wembley, courtesy of goals from Ella Toone and Chloe Kelly.

It was a fiery game between the two old rivals with seven players booked in total and some contentious decisions from the officials, as Voss-Tecklenburg lamented after the game: ‘I’m thinking about the situation at 0-0, there was a clear situation in the box which was a clear handball.

‘VAR looked at it but didn’t give it. Why didn’t the referee look at it? That hurt a little.

‘We wanted to play courageously to get the first goal and play with a high press. When we actually had the ball more, we conceded the goal.

‘In extra-time the 2-1 was just a bit unlucky. Maybe the penalty should have decided it.’

It was a very even game with both sides dominating phases of the match and generating plenty of chances in front of a raucous crowd of 87,192 fans, a record attendance for both the men’s and women’s Euros.

England have won their first major trophy since 1966 (Photo: Getty)

Voss-Tecklenburg added: ‘England are deserved champions. They win hard like that and look at the support they have got.

‘If you score two goals against Germany, you are deserved champions. Congratulations to them.

‘Lots of energy and pride in my team. It was incredibly loud. This will help us in the future.

‘We gave our all on the pitch, not everything worked, but we gave sweat, fight and energy. That’s very sad, you can’t find the right words to tell the team. I just have to process that.

‘We came to win the game, but we didn’t manage that. Maybe tomorrow I will have a different feeling on it.

‘Runners-up sounds pretty good, but it hurts a little bit. Only one team could win today, we might need a little more time to digest that.’

Alex Telles is set to join Sevilla on loan (AMA/Getty) Manchester United left-back Alex Telles is on the verge of joining Sevilla on loan, according to reports in Brazil. The 29-year-old joined United in a £15.4 million deal from Porto in 2020 but has been unable to secure a regular starting role in the team […]

Tributes to experienced climber, 33, who died in ‘tragic accident’ on Ben Nevis

Rob Brown’s dad said he was ‘so proud of him’ after the young man died on Friday (Picture: Facebook) Tributes have been paid to a ‘true gentleman’ who died in a ‘tragic accident’ while climbing Ben Nevis. Rob Brown, who lived in Fort William, was killed in a fall on the North Face of the […]

Travelling as a disabled person can be challenging (Picture: Metro.co.uk/Getty) With Covid restrictions almost completely gone, travel is back on the agenda. And with around one billion disabled people in the world, making travel accessible is essential. According to The United Nations Convention on the Rights of Persons with Disabilities, public transport should ensure that […]