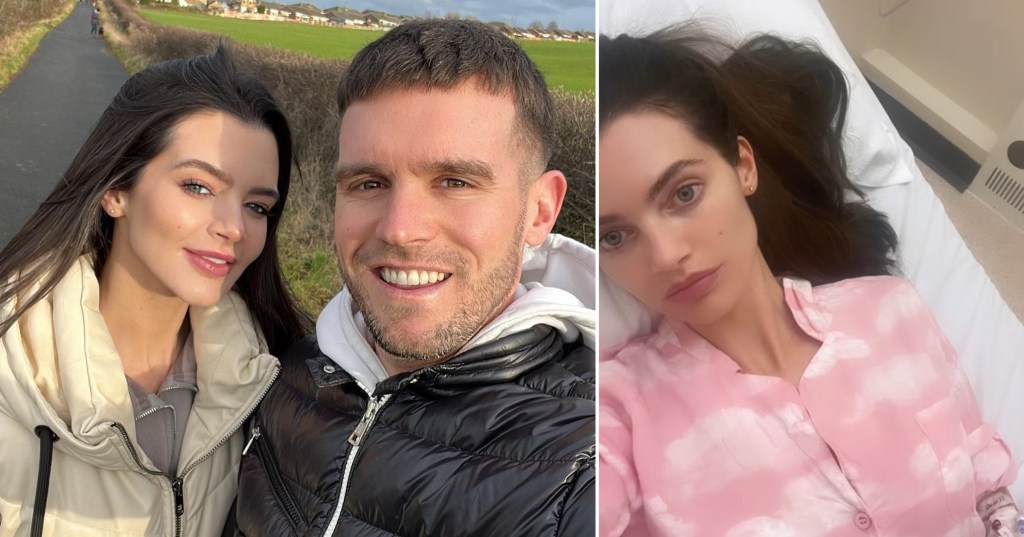 Gary Beadle revealed his wife had been admitted to hospital to fix three holes in her heart (Picture: Instagram)

Gary Beadle opened up about his family’s ‘difficult’ time after revealing his wife Emma was undergoing heart surgery in hospital.

The Geordie Shore star, 34, explained his spouse was having an operation to fix three holes in the vital organ.

Emma, 30, is expected to take three months to recover from the hospital visit, according to Gary who she married last year.

The pair share two young children together – Chester, five, and Primrose, two – and the reality star promised to ‘hold down the fort’ at home while his other half gets better.

Gary praised his wife for her dedication to motherhood (Picture: @emma_jane1392)

Emma was admitted to hospital for heart surgery (Picture: @emma_jane1392)

‘Crazy what life throws at you sometimes. Big day for our family tomorrow.’

Later on, the star gushed over his wife and her dedication to their family of four despite having to spend time apart from them.

He then went on to share how Emma had been admitted into hospital the previous night and was forced to wait hours to get onto a ward.

However, the famous face insisted that throughout the incident his wife’s only thought was for their little children.

Gary highlighted: ‘You know what shout out to all the mums, honestly Emma was literally waiting to go in at 7am this morning.

‘After we dropped her last night, and her only worry was the kids were ok and that they had found their treasure hunt surprises which she has planned everyday for them.

‘Mums are built different, nothing else matters, as long as their kids are happy.

‘I will hold the fort and update you all soon as I hear from the doctors that all has gone well.

‘Going to be a hard two to three month recovery but we got this as a family… thanks again for all the messages.’

Emma has suffered from a heart defect since birth and inflammatory condition colitis and spent time in hospital last August after she was rushed onto a ward.

At the time, she wrote on her own Instagram account: ‘My life has become turbulent and unpredictable.

‘In the space of a week I’ve had gas and air, cameras inside me, called in for a chest X-ray whilst I’m sat having lunch, bloods and to start infusions, injections and one other thing that I can’t even remember because my head is constantly a shed.

‘I don’t show a lot of my life on social media, as much as people think I do. I think I’m trying to just deal with things myself and …read more

Meghan Trainor and Daryl Sabara are expecting their second child together (Picture: WireImage) Meghan Trainor is expecting her second child with husband Daryl Sabara. The Made You Look musician, 29, confirmed her pregnancy news on Instagram, sharing photos of her scan with fans. Alongside the photo, where she could be seen holding her sonogram up […]

Pellestri and Elanga both have a number of clubs interested (Picture: Getty) Erik ten Hag says Anthony Elanga and Facundo Pellistri could still leave Manchester United before the transfer window closes. The wingers have both been heavily linked with temporary moves away from Old Trafford having struggled for game time this season although ten Hag […]

And Just Like That reunites Aidan with Carrie, Miranda and Charlotte as romance appears to heat up