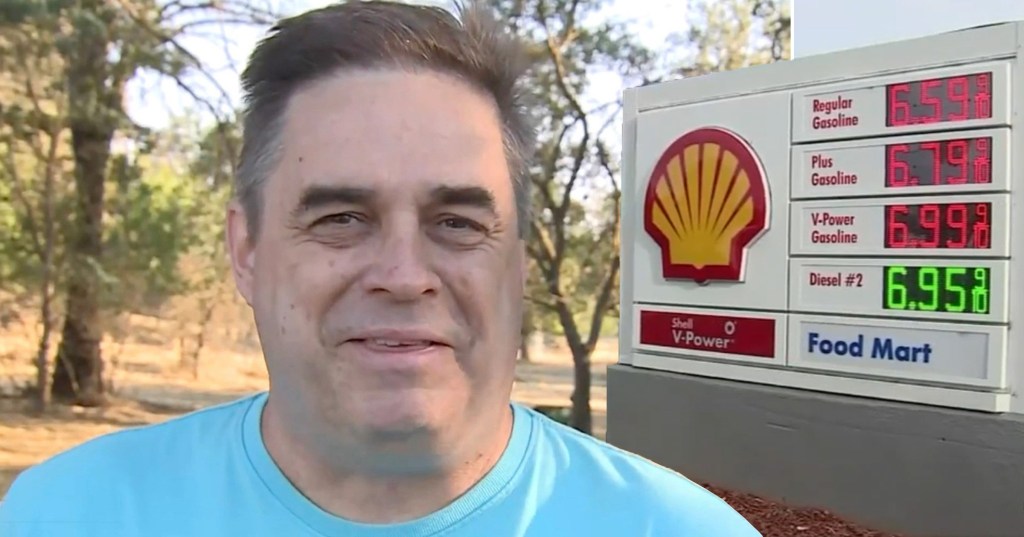 John Szczecina was fired from his job at a Shell gas station after he accidentally set the price to 69 cents instead of $6.99 (Pictures: CBS Los Angeles / ABC7 )

A gas station manager in California was let go from the job after he accidentally set the price of gas to 69 cents a gallon instead of $6.99.

John Szczecina was working at a Shell gas station in Rancho Cordova, California on Friday when he mistakenly put a decimal in the wrong spot when setting the gas pumps.

Instead of having to shell out the big bucks to buy a gallon of premium gas for $6.99, drivers flocked to the station to fill up their tank for just 69 cents a gallon.

‘Well, it was a mistake that I did, you know,’ the former manager told KVOR. ‘I put all three prices on there except the diesel, but the last one kind of didn’t go, you know, right.’

The error cost the northern California gas station a whopping $16,000, as hundreds of drivers tired of gas prices topping $5 took advantage of the mistake.

Szczecina called the mix-up a ‘nightmare,’ telling the TV station that aside from the worries that come with losing a job, he also fears the gas station could sue him.

The fear prompted Szczecina’s family to start a GoFundMe page for him, hoping to raise the $16,000 the gas station lost so that he could pay them back.

Despite his worries, legal experts say it’s unlikely he would be as employees are protected from liability when they make mistakes while performing normal duties related to their job.

The former manager says he is still on the hunt for a new job after being fired for his mistake (Picture: ABC7)

‘The only way he would be responsible outside of a written agreement is if he was acting outside the scope of his employment,’ business attorney Craig Simmermon told KVOR. ‘For instance, if his boss said, “Whatever you do, don’t ever set the price on that gas pump,” and then he did.’

The former gas station manager says he has already filed out 10 job applications, and hopes to gain employment once again soon.

Granit Xhaka was booked during the closing stages of Arsenal’s win over Leeds United last December (Picture: Getty) Granit Xhaka’s bizarre booking against Leeds United last December is the subject of an investigation by the National Crime Agency. The Football Association confirmed in January they were investigating the incident amid suspicious betting patterns. Xhaka was […]

The old schoolhouse was used as an RAF base during the Second World War (Picture: SWNS) The owner of a historic building’s decision to spruce the place up turned out to be a very costly error. Malawi Nijar removed sash windows at the Grade II-listed Summerland Lodge in Kent – and earned himself a £50,000 […]