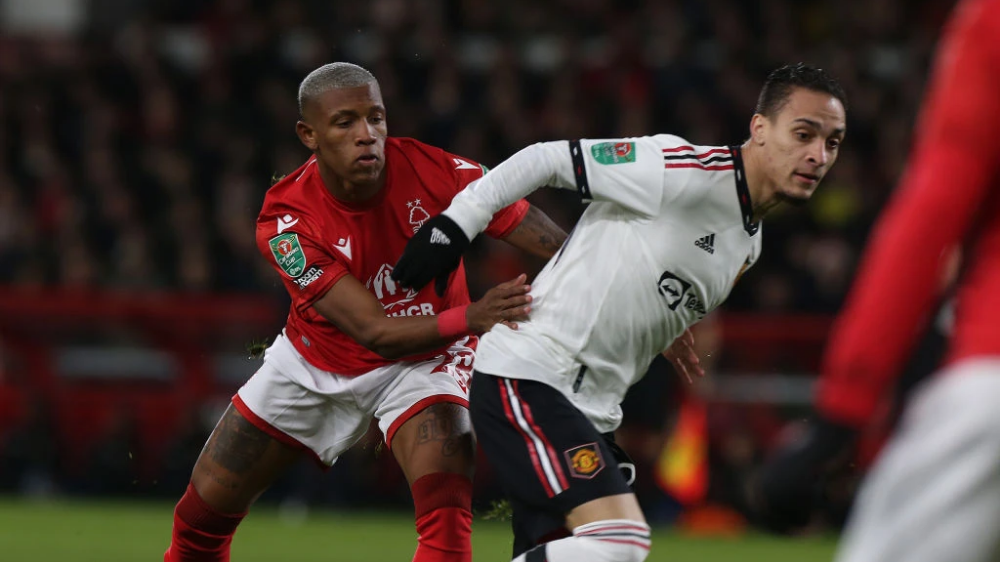 Antony has failed to register an assist across his opening 20 games for Man Utd (Picture: Getty)

Gary Neville has urged Manchester United star Antony to emulate a certain Manchester City player and feels the Brazilian is too predictable.

The 22-year-old moved to Old Trafford in a £86m deal from Ajax in the summer and has produced five goals across his opening 20 games for the club.

Although he played a key part in United’s second goal in the 3-0 Carabao Cup semi-final first-leg win over Nottingham Forest on Wednesday night – forcing a save from Wayne Hennessey as Wout Weghorst scored from the rebound – Antony is still looking to register his first official assist for the Red Devils.

Neville watched the 3-0 victory over Forest and during the game, he shared his opinion on Antony and feels he needs to replicate City star Riyad Mahrez.

Mahrez has scored 10 goals and made four assists across 25 games for Pep Guardiola’s side so far this season across all competitions.

‘I’ve been thinking a lot about Antony in the last few days,’ Neville said while on commentary duties for Sky Sports.

‘He needs to develop that Mahrez side of things to be able to go both ways.

‘At the moment he’s still a little bit predictable in trying to always force it onto his left foot.’

Roy Keane also gave his thoughts on Antony prior to kick-off and said: ‘Another thing he’s [Antony] got to learn from playing for a big club like Manchester United is off the ball working a bit harder.

‘He needs to help his team-mates a little bit more, but that will come to him.’

Antony had a few goalscoring opportunities in the 3-0 win over Forest – with Hennessey denying him with a vital block on 33 minutes.

United, meanwhile, are back in action on Saturday when they host Championship side Reading in the fourth round of the FA Cup.

Daisy was horrified to come face to face with Justin once more (Picture: ITV) Daisy Midgeley (Charlotte Jordan) was left horrified in Coronation Street tonight as stalker Justin took things a step further. Social media influencer Daisy has been trying to plan the wedding of her dreams, while also dealing with harassment from internet stalker […]

Casualty spoilers: Ethan finally gets his happy ending as he leaves

What a journey it’s been (Pictures: BBC) ‘It’s been an absolute pleasure, Dr Hardy.’ With those words and an actual tear in his eye, Dylan (William Beck) said goodbye to Ethan (George Rainsford) as Ethan left the ED – and Casualty – to go travelling with his young son Bodhi and spend as much time […]

To view this video please enable JavaScript, and consider upgrading to a web browser that supports HTML5 video Carol Vorderman is living her best life after deciding to embrace a ‘freer’ idea of romance rather than trying to find ‘The One’ following two divorces. Since she was around 50, the 62-year-old star has focused instead […]