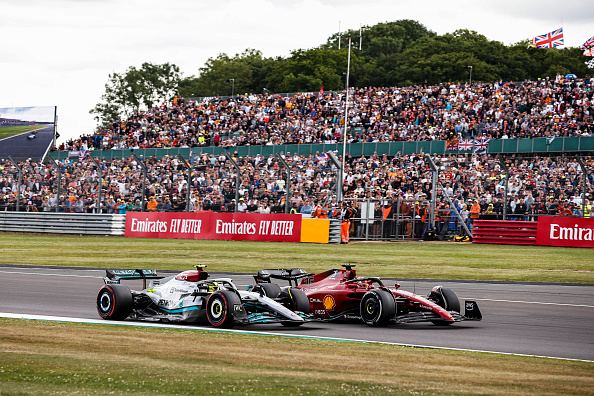 Activists had took to the racetrack during last July’s Silverstone Grand Prix.

Opening the case at Northampton Crown Court on Wednesday, prosecutor Simon Jones said: ‘Each of these defendants were present at Silverstone and they were intent on causing a disruption to the race.

‘It is not in dispute that five of the defendants in this case – all of them save for David Baldwin – made it on to the racetrack and they did not have permission to be there.’

He added: ‘They sat down in front of the ongoing cars – Formula 1 motor racing cars.

‘They will inevitably say that this was done as an act of protest and in order to bring publicity to the cause and demand they make of no new oil and gas licences.’

Mr Jones played video footage to the jury of seven women and five men at Northampton Crown Court, showing F1 stars Yuki Tsunoda and Esteban Ocon driving past five protesters who were sitting on or being dragged off the track.

The prosecutor added: ‘The prosecution say that there was clearly an immediate risk of serious harm being caused. Plainly, they could have been struck by fast-moving vehicles with obvious severe consequences.

Among the video exhibits shown the jury on the first day of the trial was footage of a three-car collision at the first turn of the race, in which no drivers were seriously hurt.

Commenting on video footage of numerous cars passing along the Wellington Straight, she said part of the front of Tsunoda’s car was missing as it passed the protesters, with loose bodywork ‘sparking’ along the ground.

Asked by a defence barrister to comment on the frequency of ‘pitch invaders’ at F1 races, she told the court: ‘Very seldom and when it does (happen) it’s a very serious matter.’

WWE SmackDown – create your own identity (pic: YouTube) A reader discusses how playing as Princess Peach and using WWE’s create-a-wrestler mode helped them come to terms with their own identity. ‘Switch Off’ If you consider the scientific theory that in a multiverse there are different versions of ourselves doing all sort of different activities, […]

Charlie McNeill hopes to move on loan this month (Picture: Getty Images) Manchester United intend to send a number of youngsters out on loan before the end of January, although they will only do so if they can guarantee first team football for their players. The transfer window closes on Tuesday and the Manchester Evening […]

General secretary of the RMT Mick Lynch during strike action yesterday (Picture: Shutterstock) Network Rail has revised its offer to the Rail, Maritime and Transport union in a bid to avert more strikes and end their dispute over pay and conditions. The infrastructure giant’s proposals include a reduction in rail workers’ hours to 35 a […]