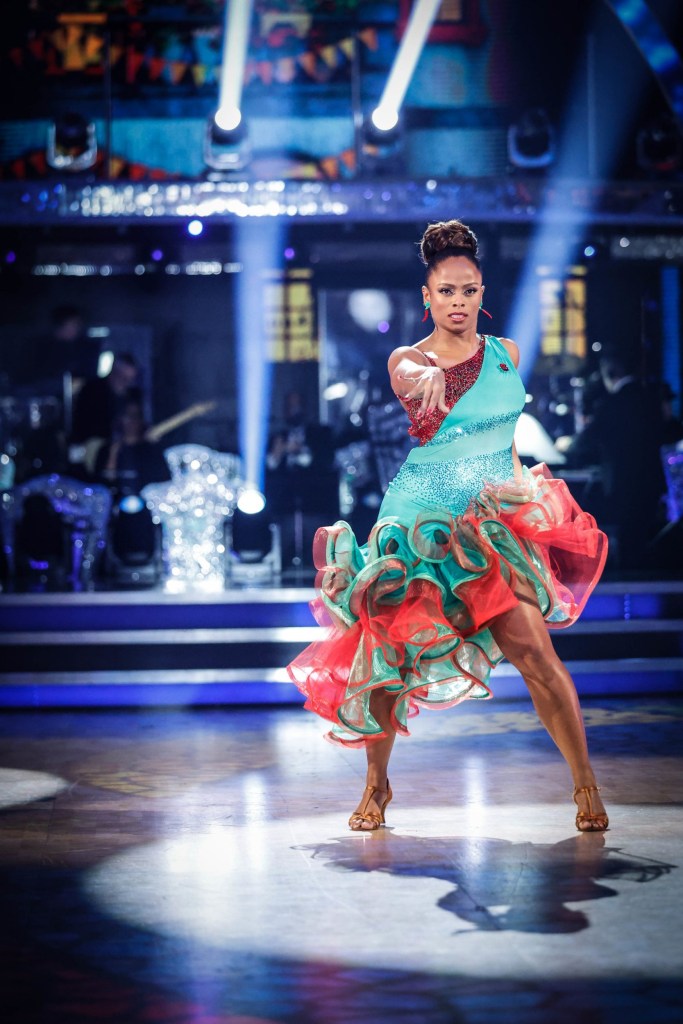 Fleur East has dismissed any rumours of the Strictly Come Dancing ‘curse’ and has insisted her stint on the BBC One show has actually been a ‘blessing’ for her marriage.

The Sax hitmaker, who is partnered with Vito Coppola, married her husband Marcel Badiane-Robin in 2019, after a three-month engagement.

Over the past 18 years that Strictly has aired on the BBC, speculations have swirled regarding potential blossoming romances between celebrity contestants and professional dancers – a phenomenon known as the ‘Strictly curse’.

One of the most notorious cases was when I’m A Celebrity star Seann Walsh was photographed kissing his professional partner Katya Jones, who at the time was married to fellow Strictly pro Neil Jones.

But, Fleur isn’t worried about any curse at all, and revealed how ‘great’ the show has been for her marriage.

Appearing on the Graham Norton show tonight, the 35-year-old says: ‘The show’s been a blessing for my marriage, it’s been great.

Fleur scored the first 40 of the series (Picture: PA)

Fleur has been married to Marcel for 12 years (Picture: David M. Benett/Dave Benett/Getty Images for evian)

‘We’ve been together for 12 years and how often in your marriage do you dress up and look different every week, and get to do all these sexy dances in front of your husband?

‘After the Argentine tango it was like we got married again! It was wonderful.’

Fleur also spoke about scoring a perfect 40 in Blackpool, adding: ‘It is the most iconic week of the show and to get there and score so well was incredible, especially as it has been rough being in the dance off twice and having lots of harsh criticism.’

Notoriously difficult to please Craig simply described it as ‘fab-u-lous’, while Shirley said it was ‘an iconic routine that will go down in history.’

Fleur has previously spoken out about the show ‘spicing up her marriage’.

Fleur has shared the show ‘spiced’ up her marriage (Picture: Samir Hussein/Getty Images for Urban Outfitters)

‘If you want the spark to be reignited in your marriage, then do Strictly,’ she said.

‘When has he ever seen me in a new look every week, moving my hips like that? When do you ever get to do that for your partner? It’s like I’m performing for him every Saturday night,’ she added to the Mirror.

Fleur and Marcel met when they both worked in a nightclub back in 2010, but have largely kept their relationship out of the spotlight.

Winter Love Island 2023: Everything we know about the series so far

Thing are heating up this winter. (Picture: ITV) Forget the summer of love – things are about to heat up this winter, with the return of Winter Love Island just around the corner. The hit ITV dating show will have both a winter and summer series this year, with the first season of bombshells, bust-ups, and bromances […]

Sue isn’t sold on Hancock (Picture: ITV/Shutterstock) I’m A Celebrity’s Sue Cleaver and other campmates are still not sold on Matt Hancock and his ‘motives’ for entering the jungle. The Coronation Street actor, as well as campmates including Babatunde Aléshé, Chris Moyles and Jill Scott, had an intense conversation about the politician as he lay […]

Man Utd hero Roy Keane and Arsenal midfielder Thomas Partey (Pictures: ITV/Getty) Roy Keane doubts Arsenal midfielder Thomas Partey has the ‘leadership skills’ to galvanise Ghana at the World Cup. Partey has established himself as one of Arsenal’s most important players this season, starting 11 of the Gunners’ 14 league matches and helping Mikel Arteta’s […]