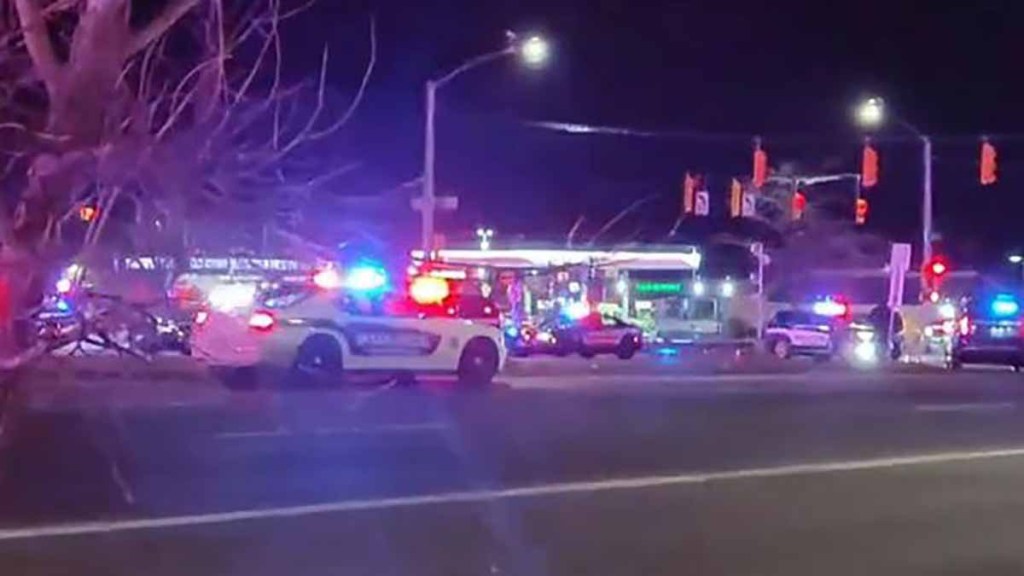 Police rushed to the scene outside of the gay club in Colorado Springs (Picture:@IntelPointAlert/Twitter)

A gunman opened fire killing five people and injuring 18 at a gay club in Colarado Springs.

Eyewitnesses suggest that ‘multiple people’ were hit in the incident and that there have been a number of fatalities.

Footage shared on social media shows a huge police and emergency response, with ambulances lining the streets outside the club.

One unconfirmed report claimed the suspect used a sniper rifle in the barbaric attack.

Hours after the horrific shooting, Colorado Springs cops confirmed that five people had been killed in the Club Q shooting with another 18 injured.

They have not yet revealed the condition of those hospitalised.

The attack comes on the Transgender Day of Remembrance, which is observed annually on November 20 in memory of anyone murdered as a result of transphobia.

Club Q bartender, Michael Anderson, has spoken of his fear.

He told The Mirror: ‘I was afraid I was going to die. I was preparing to get shot, when the shots then stopped.

‘After a minute or two I wasn’t sure if it was over or not, so I got up and decided to make a run for it. I found a man lying on the floor being shot in the neck.’

Gaby Lamah, 32, who has been visiting the club since she was 19, told The Mirror how she and her friends made a ‘last minute decision’ not to visit the venue last night.

She said Club Q is one of a limited number of nightclubs catering for the LGBTQ+ community in Colorado Springs.

She told The Mirror: ‘Club Q has always been a calm, loving energy’.

When asked how she felt after hearing the news, Gaby said: ‘Angry. Heartbroken. I’m not sure I could back there and not be anxious the entire time.

‘It feels like our world is going backwards instead of forwards.’

https://www.instagram.com/p/Ck87HkUKxZC/?hl=en Hollyoaks star Nikki Sanderson has shared a heartfelt Instagram picture of her mum with a man called Howard – the first responder who, Nikki says, saved her mum’s life in the most traumatic circumstances. In the post she describes how, on November 14 last year, her mum called her brother and sister-in-law saying she […]

Billy needs all the support he can get (Pictures: BBC) Billy Mitchell (Perry Fenwick) receives support from Freddie Slater (Bobby Brazier) in EastEnders next week, as he struggles to get his head around Lola Pearce’s (Danielle Harold) prognosis. Lola, as viewers know, was diagnosed with a terminal brain tumour earlier this month. The hairdresser was […]

When does London bus strike end today and when is the next one?

Strikes are set to happen today affecting London buses (Picture: Getty) Londoners are probably getting quite used to transport strikes – as indeed is everyone across the UK. One of the latest disputes to come to industrial action is that between London bus drivers, part of the Unite union, and bus company Abellio – in […]