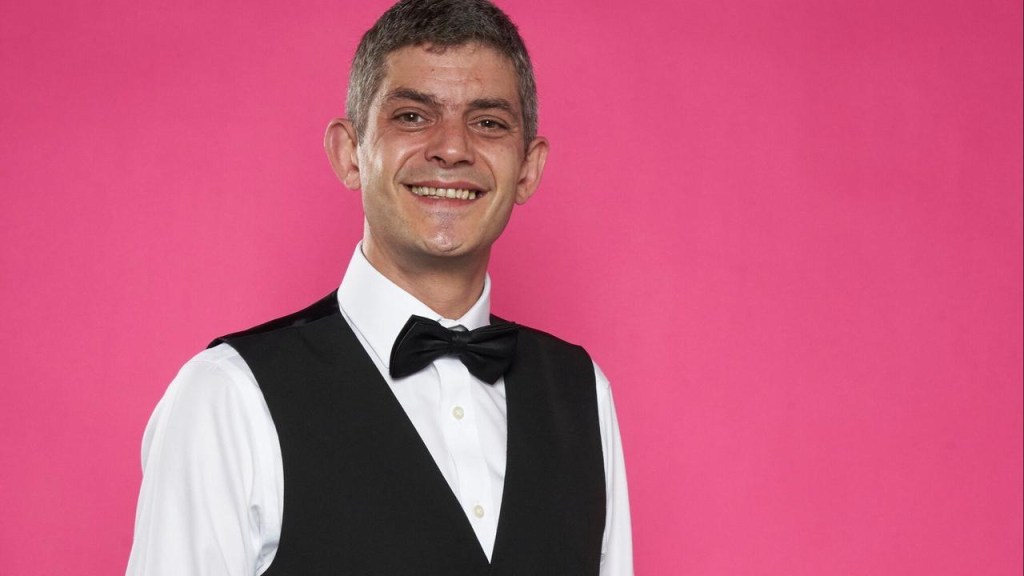 Merlin Griffiths of First Dates who was first diagnosed in September 2021 (Picture: Channel 4)

First Dates favourite Merlin Griffiths has shared an update from hospital as he prepares for his final round of cancer treatment.

The TV personality, 47, a series regular on First Dates, was first diagnosed with bowel cancer in 2021 and has been undergoing treatment ever since.

A tumour 4.5cm wide was found in his bowel almost two years ago, and he was diagnosed with stage three cancer soon afterwards.

He underwent surgery in April last year, before sharing his frustration at a setback he suffered in September, and has been recovering since then.

After sharing in recent weeks that he was back working in TV again, he’s now let his fans know that his next phase of cancer treatment will be his last.

Merlin shared a picture of himself in a hospital gown, holding his companion Buttony the Bear, saying: ‘Checked in (with the bear of course) and ready to go.’

Fans sent their good wishes Merlin’s way, with many of them recounting their own experiences with bowel cancer to help get him through.

‘Good luck Merlin. I was diagnosed aged 31 stage three back in 2006. Had the reversal done, celebrating 17 years cancer free in June,’ one supporter said.

Merlin had a stoma bag fitted as part of his treatment for cancer (Picture: MerlinFDC4/Twitter)

Another commented: ‘Hoping it all goes well for you and that your recovery time is speedy, take care.’

The First Dates barman was fitted with a colostomy bag as part of his treatment last year, and Buttony will now be donated to a child with a stoma.

In a post made earlier this week, he said: ‘This handsome fella, Buttony Bear, will be coming with me on Monday when I check into hospital.’

He continued: ‘He’ll be gifted to a child with a stoma. My stoma journey looks like it’s coming to an end [but] … some children grow up with a colostomy. Buttony aims to support them!’

Merlin was recently well enough to film a New Years Eve special episode of Saturday Kitchen, and will be hoping to return to TV full-time very soon.

We never want the series to end (Picture: ITV/Shutterstock) Love Island’s winter 2023 series has so far given us drama left right and centre, with a huge fight kicking off between Zara and Olivia and two Aussie bombshells entering the villa from all the way down under, and we’re only in the second week! For […]

A well-known face from television adverts has launched a surprising attack on diversity, pronouns and gender identity labels. Howard Brown from the Halifax adverts has recorded a ‘protest song’ written by comedian Dominic Frisby. In it, he blasts ‘fake diversity’, unconscious bias training, and pronouns, repeating: ‘What happened?’ Taking a swipe at gender identity labels, […]

Episode 3 of The Last of Us takes viewers on a tear-jerking tale (Picture: HBO/Sky) Warning: spoilers ahead for The Last of Us episode 3. It’s safe to say that the latest instalment of The Last of Us will leave many fans bawling their eyes out, after the love story of Bill (Nick Offerman) and […]