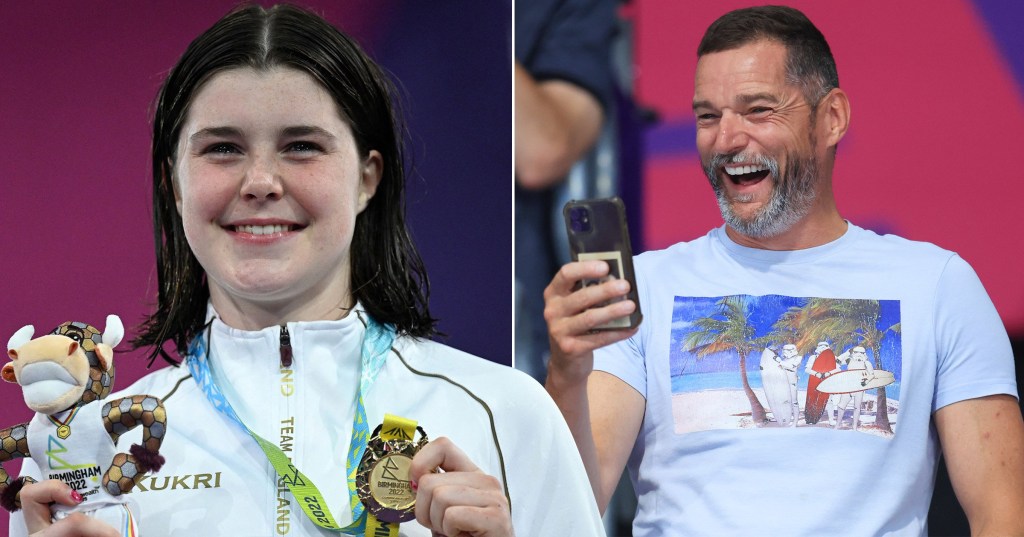 First Dates star Fred Sireix is treating his champion diver daughter to a holiday to New York City after she clinched a gold medal in the Commonwealth Games.

At just 17 years old, Andrea Spendolini-Sirieix has had a stunning win at the international sports competition as she won a gold medal for Team England this week.

The sports superstar – who became an Olympic diver at just 16 – topped the leaderboard at the 10m Platform in Birmingham on Thursday evening, and her dad was there to cheer her on every step of the way.

The proud dad was seen supporting Andrea from the sidelines on Thursday as she easily got through the qualifying rounds to reach the finals, pictured giving thumbs up, cheering, and giving fatherly advice from the side of the pool.

Now the father-of-two, best-known as the charming maitre d’hotel on the Channel 4 dating show, is planning to celebrate Andrea’s incredible win with a trip to the Big Apple.

He told the Daily Mail: ‘We are going to take her to New York in September when she turns 18. We’ll spend a few days there as she’s never been. She’s always wanted to go.’

‘She deserves it,’ he added.

Andrea had a stunning win as she clinched gold in the Platform diving event at just 17 years old (Picture: @fred_sirieix)

The star, who also shares 13-year-old son Lucien with former partner Alex, admitted he barely slept a wink since Andrea won the gold as he kept replaying the moment in his head.

He was pictured cheering and up punching the air along with the crowd as the Team England star took first prize after gathering an incredible 357.5 points.

In the same interview, Fred described how his daughter has trained ferociously to get where she was since she was eight years old, with him following every step of the way.

First Dates star Fred punched the air with glee as his daughter did her ‘best’-ever’ dive (Picture: Getty Images)

After years of training six days a week, often ‘four to five hours a day,’ Andrea pulled off her ‘best-ever’ dive in the Commonwealth Games final, Fred said proudly.

The Channel 4 star had given fans a blow-by-blow account of the event, sharing a photo of the pool as he told his Twitter followers: ‘This is it! Let’s #goAndrea’.

Thank you so much for all the messages congratulating Andrea. Itâs really nice. Really warming. Thanks. I just want to apologise as I canât respond to all. Itâs very kind x

Fred was the proudest father as Andrea was crowned champion and awarded the gold medal for her efforts; her …read more

You need a tough skin to be filmed all the time (Picture: Getty Images) Animal Park is a long running BBC nature program that has made viewers roar with delight since 2000. The documentary series has introduced viewers to such delights as as the first baby southern koala in Europe – while cheetahs, wolves and […]

Tyler Bate has arrived in NXT and has Bron Breakker in his sights (Picture: WWE) Tyler Bate made an epic return to WWE NXT this week and confronted Bron Breakker after the huge Heatwave main event. The Dudley-born British wrestler stepped out at the end of Tuesday night’s special episode and even had the NXT […]

He couldn’t hold back the giggles! (Picture: Tiktok @mgpnews) A newsreader has left viewers in their own fits of laughter after he couldn’t hold back a burst of giggles while presenting what appeared to be a live news report. But while brightening up everyone’s day with a video that’s gone viral, he’s actually duped them […]