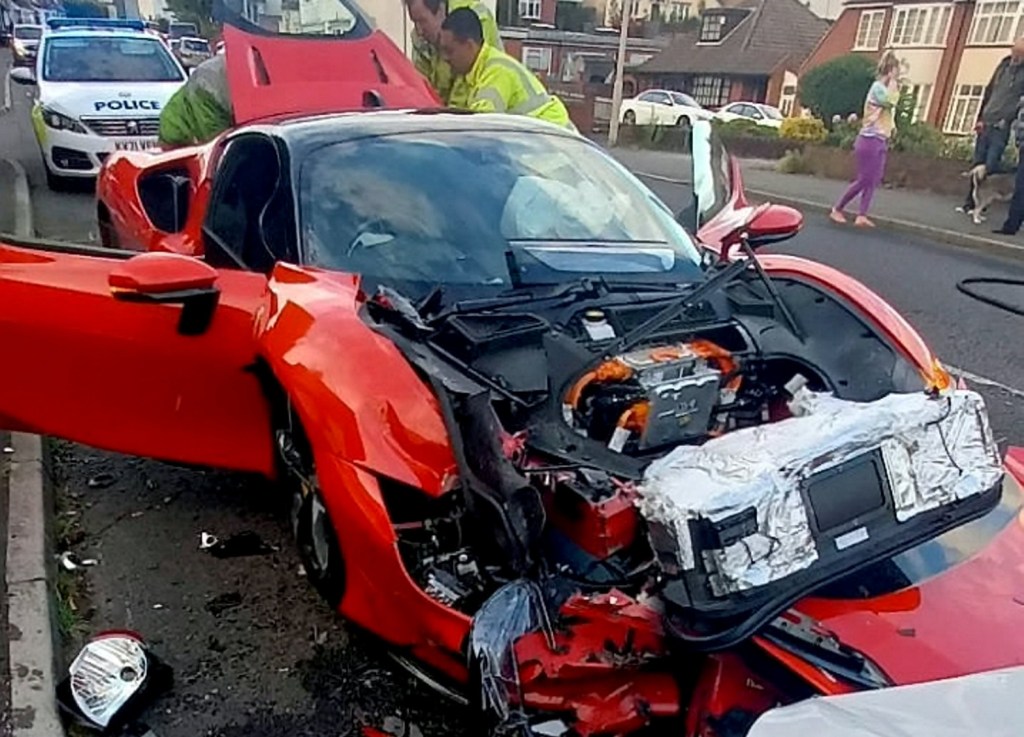 A £500,000 Ferrari SF90 has been wrecked after the driver lost control and crashed it into five parked cars.

Richard Cullen, 50, admitted in court driving without due care and attention and failing to stop to give his details after the crash.

Birmingham Magistrates Court heard how he was driving the red supercar at around 7.40pm on May 25 last year when the smash happened.

The front of the car was left a crumpled mess and bits of it were found across the road.

Cullen was later arrested and denied any wrongdoing, but changed his plea when he arrived at court.

The court heard how Cullen ‘lost control of the vehicle and veered into the opposite carriageway failing to correct the course deviation and collided into the front of a vehicle’.

A spokesperson for West Midlands Fire Service said: ‘Shortly before 7.45pm on Wednesday, May 25 we responded to Hagley Road, Halesowen, where a car had been in collision with five parked vehicles.’

West Midlands Police launched a manhunt for Cullen after he fled.

A spokesperson said: ‘Officers attended and found the vehicle had been abandoned and no injuries were reported to us.

‘We made a search of the area and spoke to a number of witnesses but were unable to locate the driver.’

Cullen was arrested the next day at his home nearby.

He was bailed and the case was adjourned until February 27 when he will be sentenced.

Derbyshire Constabulary said officers found a number of ‘suspicious items’ during a search (Picture: Getty Images/iStockphoto) Homes have been evacuated and surrounding roads closed after a man was arrested on suspicion of explosives offences in Derbyshire. Police rushed to an address in Belper shortly after 6pm on Friday following reports raising concerns for the safety […]

Bournemouth are also interested in the Italy international (Picture: Getty) Arsenal and Tottenham have been warned Roma star Nicolo Zaniolo will ‘create problems everywhere’ unless he changes his attitude. The attacking midfielder has been strongly linked with January moves to both north London sides with Arsenal holding talks over a potential deal earlier this month. […]