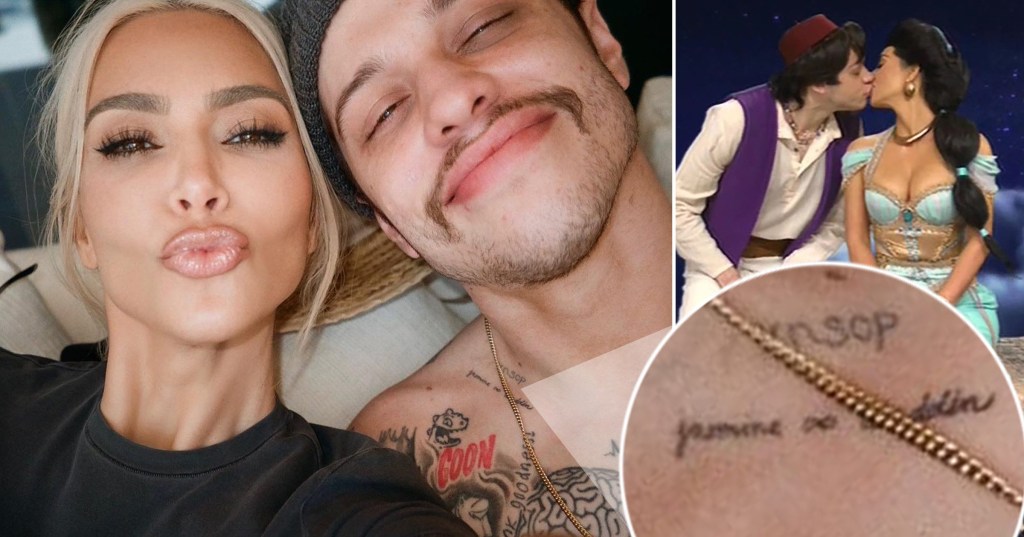 Fans are mercilessly mocking Pete Davidson for getting tattoos about Kim Kardashian and her children now that they have split after nine months together (Picture: Instagram/ SNL)

Pete Davidson and Kim Kardashian have split up after nine months – and several tattoos.

The Saturday Night Live comedian and reality star have gone their separate ways, months after first meeting on Pete’s show.

Their split was reported on the same day Khloe Kardashian and Tristan Thompson’s second child was reportedly born via surrogate, but Kardashian fans seem to be more interested in Kete splitting – and what the comedian will do now.

Pete had got several tattoos in honour of his businesswoman girlfriend: one bearing the words ‘My girl is a lawyer, and another saying ‘Aladdin and Jasmine,’ a reference to their first kiss on the SNL sketch.

Another saw the actor ink his girlfriend’s initials into his skin, along with those of her four children, North, Saint, Psalm and Chicago.

Now that the pair have broken up, it didn’t take fans long to reference the tattoos and absolutely annihilate the premature, permanent decision.

One of the tattoos Pete had dedicated to Kim made reference to her studying to be a lawyer (Picture: Kim Kardashian / Instagram )

Flocking to Twitter, hundreds of people made their thoughts known, with plenty making reference to the fact Pete has had to get tattoos of his exes covered up before.

‘Pete Davidson’s tattoo removal guy just put a down payment on another boat,’ one person joked.

One shared an image of a man dressing up in a clown costume and said: ‘Pete Davidson really got all those tattoos for Kim Kardashian only for them to break up.’

Sharing a gif from Amazon Prime’s The Boys, of Homelander looking extremely flustered, one person wrote: ‘Pete Davidson realizing he has to get tattoo coverups over another failed relationship.’

Kim and Pete were together for nine months, with Pete getting multiple tattoos referencing her and her children (Picture: Getty)

Another used a Stranger Things scene to portray what he thought Pete could be feeling. Which scene? Crying Will, obviously.

‘Pete Davidson after realizing he got Kim Kardashian and her kids’ initials tattooed on his body for no reason,’ they wrote – to the tune of 230,000 likes.

Another fan tried to see the positive side, as they admitted they want to live ‘with the sheer undaunted optimism of pete davidson every time he walks into the tattoo shop.’

pete davidson realizing he has to get tattoo coverups over another failed relationship pic.twitter.com/GOkzNyQMsf

Pete Davidson really got all those tattoos for Kim Kardashian only for them to break up. pic.twitter.com/0U0jWLK7WT

When is Chris Eubank Jr vs Conor Benn? Date, venue and ticket information

Conor Benn and Chris Eubank will square off in the ring (Picture: Getty Images) The date and venue for the Chris Eubank Jr vs Conor Benn fight has finally been confirmed after weeks of speculation in the Boxing world. The catchweight fight set to take place later this year marks another chapter in the Eubank […]

What does a recession mean and how will it affect me?

The UK is heading into a long downturn with limited options to shield families (Picture: Getty) Britain is set to suffer its longest downturn since the 2008-9 financial crisis in the coming months, according to the latest economic forecasts. The Bank of England believes the country will enter a recession by Christmas which will last […]

Wrestling legend Ric Flair was covered in blood as he won his last ever match in front of nine thousand fans and some WWE Hall of Famers. The Nature Boy teamed with his son-in-law Andrade El Idolo on Sunday night (July 31) in a winning effort against Jay Lethal and Jeff Jarrett as they brought […]