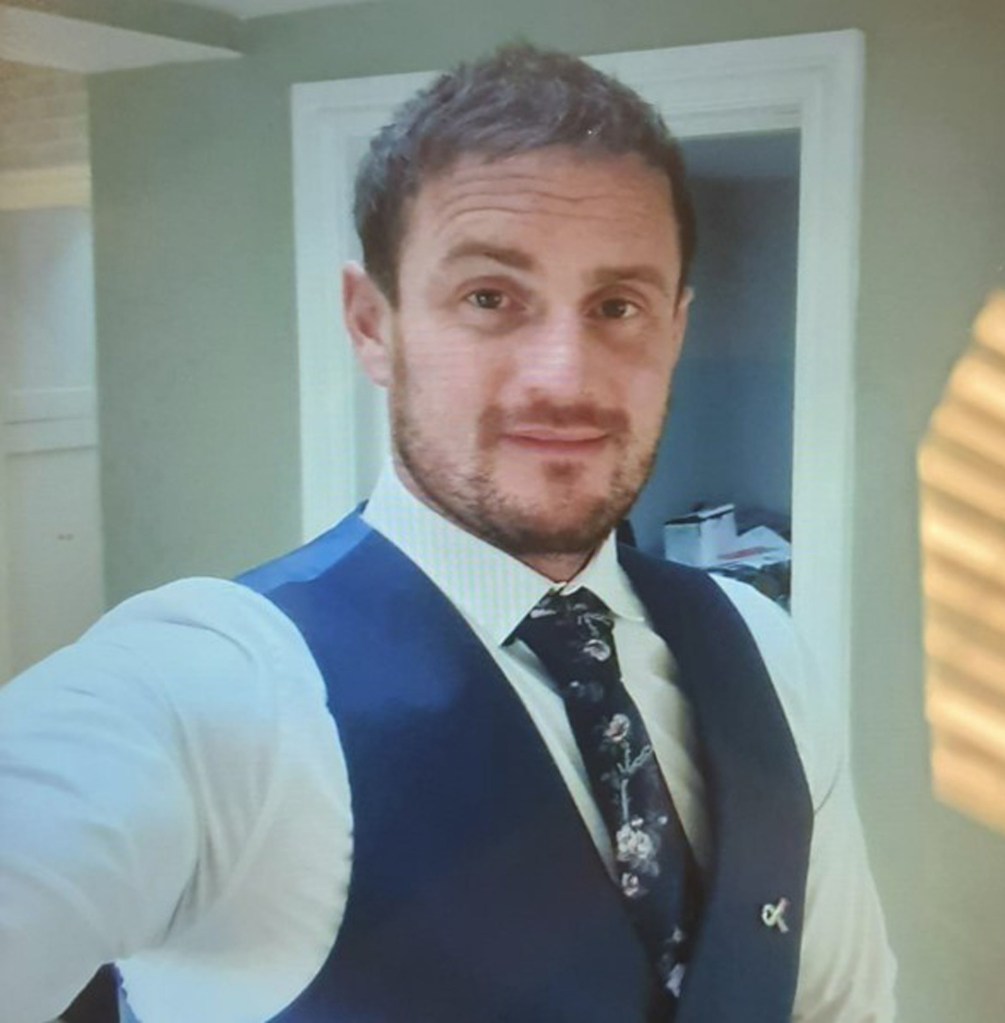 The family of a man who was fatally shot and subjected to an acid attack has made a ‘heartfelt plea’ for information about his ‘savage murder’.

Liam Smith’s body was found at the bottom of his driveway on Kilburn Drive in Shevington, Wigan, at about 7pm on Thursday November 24.

Michael Hillier, 38, appeared at Tameside Magistrates’ Court on Tuesday charged with his murder.

Greater Manchester Police continue to appeal for information on the incident.

His father, Phil, said in a statement: ‘Liam’s savage murder at his home address has sent complete shock waves of grief and despair amongst everyone who knew and loved him.

‘Two young boys will now have to spend the rest of their lives without their adoring dad, and the rest of our family will be forever haunted by this senseless act.’

Mr Smith said had ‘absolutely no idea whatsoever’ why his son was killed.

Police released an image of this car – which is known to have two different registration plates, with EJ57UPE also in use (Picture: PA)

He added: ‘We are therefore sending out a heartfelt plea to anyone with any information to please, please contact the police.

‘This can be done anonymously.

‘Anyone withholding information about what has happened, have clearly not witnessed the devastation such a heinous crime has on a family like it has done with mine.’

Detective Chief Inspector Gina Brennand said the Mitsubishi car, known to have at least two different registration plates, was seen near Mr Smith’s home on November 2 and on November 24 for 10 hours.

She said the car, which used false registration numbers EJ57UPE and R22 ORA, had clear linear damage to the near rear side behind the rear wheel arch and a lens missing on the front offside fog light.

Greater Manchester Police want to trace a Mitsubishi Shogun Elegance in connection with the death of Liam Smith (Picture: PA)

She said: ‘We need any information on the whereabouts of this vehicle, which has still not been found.

‘This may hold the missing information that we need to find answers for Liam’s family.’

Hillier, of Ecclesall Road in Sheffield, appeared at Tameside Magistrates’ Court on Tuesday and was remanded in custody to appear at Manchester Crown Court on Wednesday.

Cheryl isn’t haunted by naysayers as she makes West End debut in 2:22 A Ghost Story

Cheryl wasn’t spooked by surprise or criticism over her casting in 2:22 A Ghost Story (Picture: Seamus Ryan) Cheryl isn’t haunted by the naysayers as she makes her much-anticipated West End debut in 2:22 A Ghost Story. In an exclusive interview with Guilty Pleasures, the I Don’t Care singer addressed the response to her Jump […]