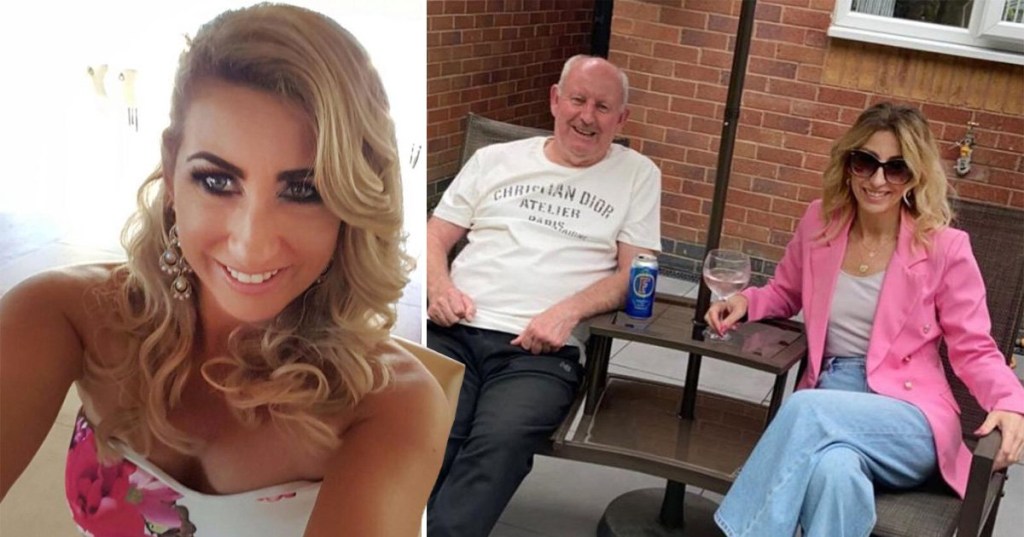 A family revealed their devastation after a dad and his daughter died just a few weeks apart.

Angela Courtney, from Huyton in Liverpool, had been diagnosed with terminal pancreatic cancer.

As she prepared to spend what she expected to be her last Christmas with her family, her dad Tony, 70, died suddenly after a heart attack on December 14.

Her sister Beverley Jeffreys said: ‘We kind of believe he died of a broken heart because he just couldn’t see her die.

‘We like to take that comfort that he died before her because he couldn’t take anymore.

‘Angela was honestly one of the most kind-hearted people, she was just a beautiful soul. Nobody could say a bad word about her.

‘She was kind, friendly, she was funny and she just lived for her family.’

Air hostess Angela leaves behind her partner, John, and her son Jonny, who is six.

Their family asked for people to wear purple ribbons to the service to raise awareness of pancreatic cancer, and £900 was donated for the cause.

Members of TUI’s cabin crew formed a guard of honour inside the church for Angela.

Angela was diagnosed with stage three pancreatic cancer in January 2022 after doctors initially thought she had a hernia when she suffered pain in her abdomen and weight loss.

A joint funeral service for Angela and her dad was held last Tuesday at St Columba’s Church in Huyton (Picture: Facebook)

Chemotherapy was not successful and she was moved to the Marie Curie Hospice, in Woolton Village, in October.

Beverley added: ‘Everybody that went to see Angela, and all the staff at the hospice, everyone would say how dignified she was. She was just amazing. She never complained and she just got on with it.

‘The staff at the hospice were amazing and they made her life towards the end the best it could be – she wanted for nothing.

‘It’s been really awful. I’m the youngest of four, I’ve got two brothers and Angela, we’ve got a big family and we all just need to be there for my mum.

‘When dad died everyone’s focus went on Angela because I had to go and tell Angela in the hospice and that was horrific. She was heartbroken.

‘She was crying saying, “All I wanted was a nice Christmas.” It was really, really sad.’

The family are getting a plaque made for the dad and daughter in their memory.

Madonna Celebration tour: How to get tickets and how much are they?

The Queen of Pop will be back holding court on the world’s biggest stages (Picture: Gotham/GC Images) This article contains affiliate links. We will earn a small commission on purchases made through one of these links but this never influences our experts’ opinions. Products are tested and reviewed independently of commercial initiatives. Madonna got fans […]