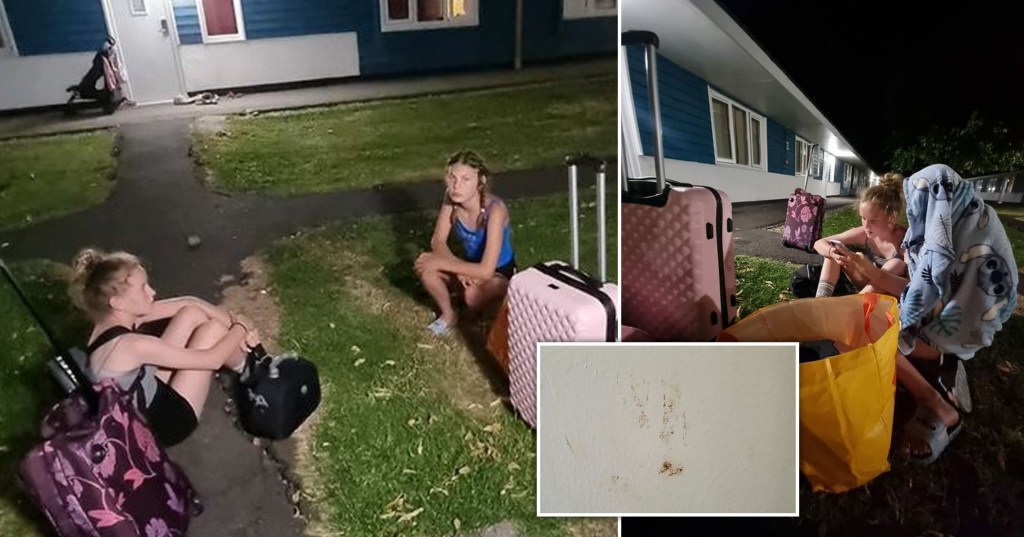 The mum says it was one of those electric shocks which ‘pulls you in’ (Picture: Cornwall Live)

A family claim they were ‘electrocuted’ on their first night staying at Butlin’s.

Katarzyna and David Baldock from Cornwall booked in for a stay at the Minehead resort in July with their daughter and friend.

The family were already unhappy after complaining about the cleanliness but things took a turn for the worse at 9.30pm on the first night.

Katarzyna claims to have experienced the worst electric shock of her life from a light switch in her room, before the same happened to her wheelchair-bound husband.

The furious mum claimed the group were left outside for hours waiting for new accommodation.

No electrical faults were found with the accommodation, CornwallLive reports, and the holiday firm says an electrician arrived within the hour to investigate the problem, while the family was moved to temporary accommodation.

But Katarzyna said she was left feeling ‘disgusted’ after being forced to sit outside their accommodation block.

The mum, who works as a cleaner, also claimed there was fresh blood on the walls.

The family said they felt like they were homeless (Picture: Cornwall Live)

Blood was found on the walls (Picture: Cornwall Live)

Katarzyna said: ‘I went to turn the light off and I got a massive electric shock. It was a proper one.

‘One of those that pull you in. The light was still going after and wouldn’t stop flickering and stuff. That was scary and there was no caregiving.’

She added the experience frightened her autistic daughter and said she couldn’t sleep all night long.

A spokesperson for Butlin’s told Cornwall Live: ‘We’re sorry for the Baldock family’s experience with us on resort recently.

‘Safety is our top priority and where an issue does arise, our team work hard to ensure that it is dealt with as quickly as possible.

‘Once reported, our on-resort electrician was inspecting their accommodation within the hour.

‘In order for a full electrical inspection to be conducted, we moved the family to different accommodation for the remainder of their break and apologised for any inconvenience caused.

‘We have been in contact with the Baldock family directly to discuss the issues raised in more detail.’

Butlin’s told Metro.co.uk they have no further comments to add.

Lashana Lynch is a rising star… (Picture: Vittorio Zunino Celotto/Getty) Lashana Lynch is set to star as Bob Marley’s wife Rita in an upcoming Paramount biopic about the reggae legend’s life and career. The actress, 34, recently appeared alongside Daniel Craig in No Time to Die and opposite Benedict Cumberbatch in the latest Dr. Strange […]

Nicola and Ella recently welcomed their baby boy (Picture:WireImage) Nicola Adams and girlfriend Ella Baig have revealed the name of their first baby. The couple announced the birth of their baby on July 11, with former Strictly Come Dancing star Nicola sharing that she was ‘overwhelmed with love and proud of Ella’. Model Ella, 24, and her boxer girlfriend, […]

Jonathan Ross wishes the BBC was ‘more interesting’ in wake of Sachsgate (Picture: Getty/BBC) Jonathan Ross reckons the BBC has become more boring in the wake of his Sachsgate scandal on Radio 2. Many will remember how the corporation faced a public backlash after the 2008 incident when the TV presenter and comedian Russell Brand […]