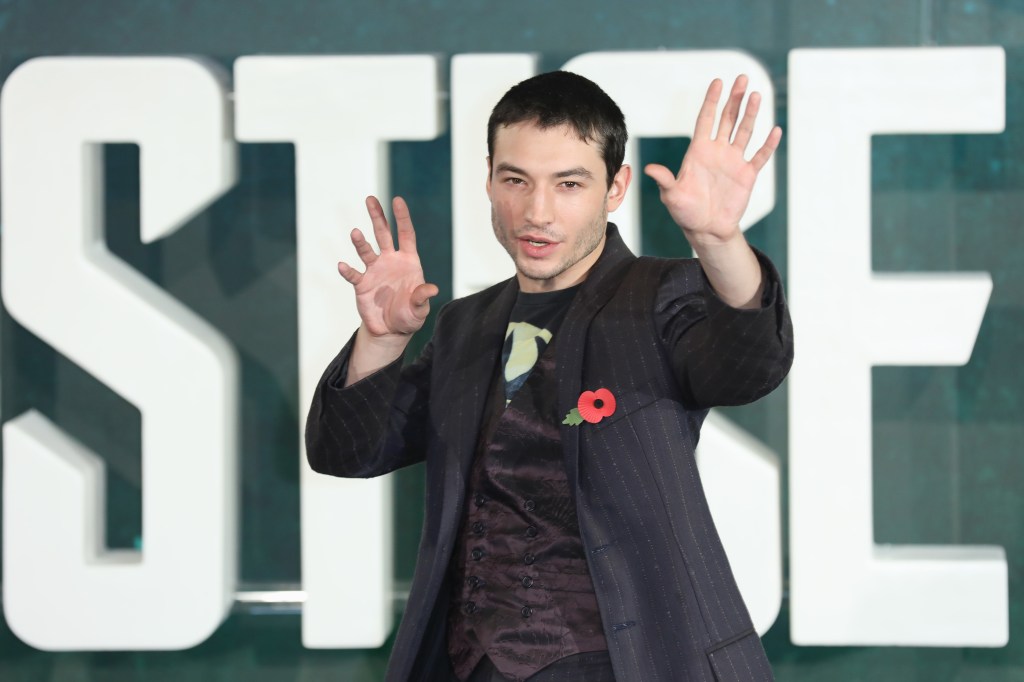 Ezra Miller has reportedly hosted a woman and her children at their farm (Picture: Getty)

Ezra Miller has been hosting a mother and her three young children at their farm, leaving the father of the kids worried, it has been claimed.

The Flash actor has reportedly housed a 25-year-old mom and her children – aged between one and five – at their property in Vermont, with sources alleging that it is an ‘unsafe environment’ for the young family.

According to reports, people have voiced their fears over the situation, claiming that there are allegedly ‘guns strewn’ around the farm.

At one point, a one-year-old child is alleged to have found a loose bullet and put it in her mouth.

The children’s father, who has not been named, claimed that the troubled star got flights for his children and their mother without his knowledge – and he has not been able to contact his kids since.

‘I got a bad feeling in my stomach,’ he told Rolling Stone. ‘I do want to go get my kids, they mean the f**king world to me.’

The unnamed woman and her family have reportedly been staying with Ezra since April (Picture: Getty)

The publication reports that the mother, who has also not been named, is still living at the farm, and has been there since April.

She claimed that Miller helped her escape a ‘violent, abusive ex’ and offered a ‘safe environment’ for her children.

‘[Ezra’s] home ranch has been a healing haven for us,’ she said. ‘They may have firearms for self-defense purposes and they are stored in a part of the house that the children never go in… My kids are able to relax more into their healing because of the safety and nurturing Ezra has been providing for them.’

The father has denied all allegations of abuse, according to the outlet.

Sources described the farm as unsafe for children, with Rolling Stone reporting that they reviewed footage appearing to show ‘at least eight assault weapons, rifles and handguns’ lying in the living room.

A social worker is thought to have visited the house last month and decided that the kids ‘looked good’, but noted that the worker in question had ‘more work to do’ – however, it is unclear if they returned.

The insiders also alleged that there has been ‘frequent and heavy’ marijuana use in front of the children.

This marks the latest concerning report about Miller after they were accused of grooming a girl from the age of 12, and using ‘violence and intimidation’ to control her.

The star’s future with DC is currently in doubt (Picture: Warner Bros)

The parents of the girl, who is now 18, have asked courts for a protection order to keep the DC star away from their child.

Miller was also arrested for the second time in Hawaii in April, accused of second-degree assault following an incident at a private residence in lower Puna.

‘Americans will be coming over here soon!’ – Brendan Loughnane proud to be part of the UK’s MMA boom as he chases PFL glory

Loughnane is one of the favourites to win this year’s tournament (Picture: Cooper Neill) Brendan Loughnane will have a new opponent standing opposite him this weekend but the end goal is the same – get the win that sets him on course for a PFL semi-final spot back in the UK this summer. This Friday […]

The Big Questions: DJ Fat Tony on conquering addiction, the importance of Pride, and finding ‘light in the darkness’

Welcome to Metro.co.uk’s The Big Questions, where we ask the biggest of big questions (and the smaller ones too), and this week we had a chinwag with legendary DJ, Fat Tony… Growing up on a council estate in Battersea, in South London, the music-maker, AKA Tony Marnoch, tapped into his superpowers behind the decks to […]

It’s a surprising comparison but why are fans so mad? (Picture: BBC/Netflix) The trailer for Netflix’s adaptation of Persuasion starring Dakota Johnson dropped this week and fans of Jane Austen were a little surprised by what they saw. Alongside setting up the slow-burning central love story between Anne Elliot (Johnson) and Captain Frederick Wentworth (Cosmo […]