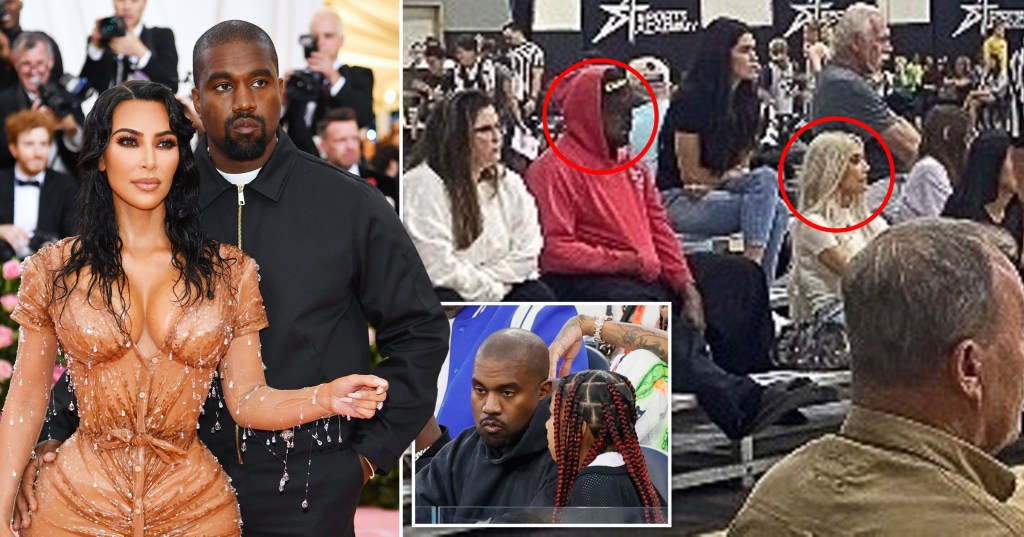 Embattled exes Kim Kardashian and Kanye West put on a united front as they were seen watching their daughter North compete in a basketball match.

On Friday the two were spotted in the stands at a sports venue near Thousand Oaks, California, where they cheered on their nine-year-old.

But while the pair put on their co-parenting front and sat nearby each other they did put some distance between themselves for the duration of the match.

Seated on separate sections of the bleachers, rapper turned fashion retail mogul Kanye, 45, dressed in a red hoodie pulled over a baseball cap, sat next to fellow parents as he took in the match.

Meanwhile, reality TV star and businesswoman Kim, 41, who wore a short-sleeve bodycon Balenciaga T-shirt tucked into light denim jeans, was joined on the other section of the benches by her publicist and pal Tracy Romulus, whom Kanye slammed online for ‘manipulating’ Kim in February.

Despite this, eyewitnesses stated that the pair ‘spoke from time to time throughout the evening and appeared cordial’ according to TMZ.

Kim and Kanye, who kept some distance at the game, had been at loggerheads over their divorce for months (Picture: TMZ / Backgrid)

Just days after the game, Kim made a Father’s Day tribute to Kanye praising him for being ‘the best dad to our babies’ (Picture: Instagram)

Just a couple days after the game, Kim took to Instagram to wish Ye a Happy Father’s Day.

The Skims billionaire shared a snap of Kanye, North and their three other children, son Saint, six, daughter Chicago, four, and son Psalm, three, to her Instagram Stories.

She captioned the image: ‘Thank you for being the best dad to our babies and loving them the way you do! Happy Father’s Day Ye!’

Kim also posted a picture of the Yeezy founder with seven-year-old nephew Reign Disick on his shoulders while embracing North and Saint.

In Happier times: Kim and Kanye were the toast of the 2019 Met Gala (Picture: Getty Images)

Kim and Kanye, who were married for six years, were declared legally single on March 2 and their divorce is expected to be finalised in August.

On the finale of her new reality show The Kardashians, Kim opened up about her failed marriage.

She told sister Khloe, 37: ‘If people knew what my relationship [with Kanye] really was like, I think they would be like, “How did this last this long?”

‘But I can live …read more

Queen travels to Scotland for first public engagement since Jubilee

The Queen has taken part in the traditional Ceremony of the Keys event (Picture: Rex) The Queen has travelled to Scotland with other members of the Royal Family ahead a week of traditional events. Her appearance north of the border had been unconfirmed due to concerns about her health. The 96-year-old had cut back on […]

Dave Grohl rocked out alongside Sir Paul McCartney at Glastonbury last night (Pictures: AP / BBC) Dave Grohl left fans emotional after he appeared to reveal his new tattoo in tribute to his late Foo Fighters bandmate Taylor Hawkins at Glastonbury this weekend.  Grohl, 53, made a surprise appearance at the Somerset music festival on […]

It’s dripping in history (Picture: Inigo) Period homes are always a popular choice with buyers. And a new property listing in Debenham, Suffolk, could be just the thing for people looking for a house dripping in history. An incredible Tudor home is up for sale at just under £900,000, with 3,000 square feet of living […]