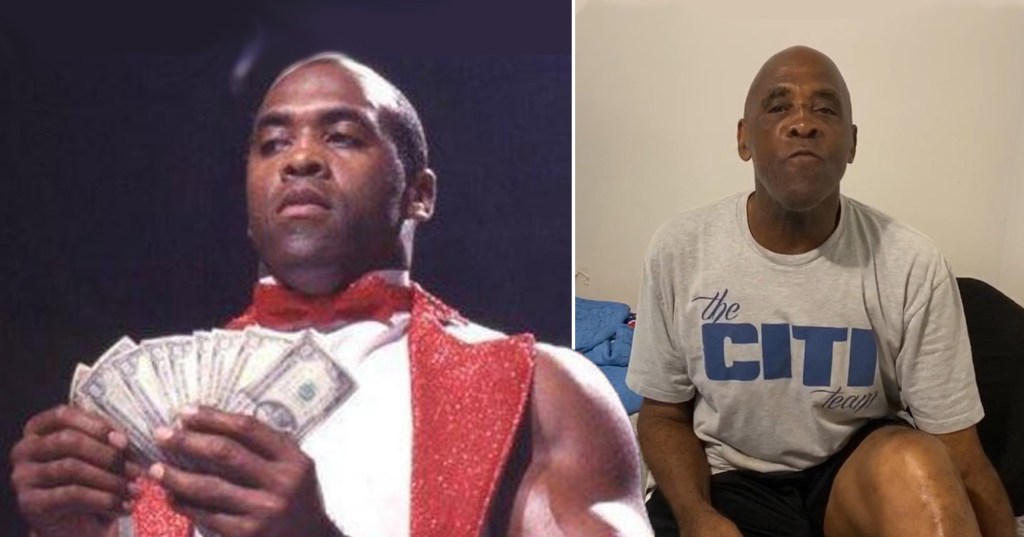 The 59-year-old veteran – best known to fans for his run as Ted DiBiase’s personal assistant in the mid-to-late 1980s – has once again appealed to fans for financial support just weeks after disclosing more heartbreaking news.

Back in April, Virgil explained he had suffered two ‘massive strokes’ and got diagnosed with ‘an early stage of dementia’ after concerns following WrestleMania weekend in Dallas.

Taking to Twitter on Saturday, he wrote: ‘It’s really shitty right now. Too make things worse I know have stage 2 colon cancer. I am a fighter but need your help. I cannot afford any of the medical bills and would love your support. (sic)’

Last month, Virgil – whose real name is Mike Jones – admitted he is ‘scared’ by his health battles, and doesn’t think he can ‘afford to get through this’.

Detailing his struggles, he wrote on Instagram: ‘Unfortunately I have some really hard news to share. If you were wondering why I haven’t been so engaged over the last few weeks it’s because i was given bad news.

‘Since Mania weekend (of all weekends) I was not feeling so great. Something wasn’t right. My head, my arm and my heart . When I came back from Dallas i Ended up going to the Doctor and they discovered a whole bunch of issues.

‘For starters- without me knowing, over the past few months the Doctor had identified that I suffered 2 massive strokes. Like I didnt Even have a clue till I started not working with 1 of my arms. It’s basically not able to do anything.

The star has appealed to fans and fellow stars for support (Picture: Virgil/Twitter)

‘This was the decent news. The worse news is that I have Been told that I am Fighting with an early stage of dementia. The years of taking the big main event bump every night (that nobody else wanted to take) Had started to effect me. (sic)’

He called on fans and big names like Randy Orton and AEW’s Chris Jericho to help where they can.

He continued: ‘It all helps. I aint looking for sympathy. I am looking for the love I have Poured into this business to hopefully carry me through this shitty time. I did my time. I took my lumps. Now I am Just trying to survive. Hope this makes sense. Love you all. (sic)’

After spending eight years with WWE, Virgil would join WCW for a four-year run which saw him work under a number of names and characters, and he appeared as a member of the nWo.

His only championship …read more

Some 200,000 of them are believed to be children More than one million Ukrainians have been forcibly deported by Vladimir Putin’s forces and put in so-called ‘filtration’ camps, it has been reported. Three clips released on the Telegram messaging app claim to show the inside of such a camp – blasted as a ‘new page […]

Fernando Alonso returned to Formula 1 in 2021. (Photo by BRENDAN SMIALOWSKI/AFP via Getty Images) Fernando Alonso has given Lewis Hamilton a ‘welcome’ to the Formula 1 midfield, and has warned his former team-mate about how difficult it can be to make it back to the front of the grid. Seven-time world champion Hamilton is […]

US warns against hiring remote workers from North Korea

Companies that hire North Korean workers could face legal penalties for violating sanctions in the US (Picture: Shutterstock) IT workers from North Korea may be attempting to get remote working jobs to steal money, the US has warned. The money for Pyongyang would allegedly help fund North Korea’s weapons programmes, in violation of international sanctions. […]